What will going separate ways mean for Gap and Old Navy? 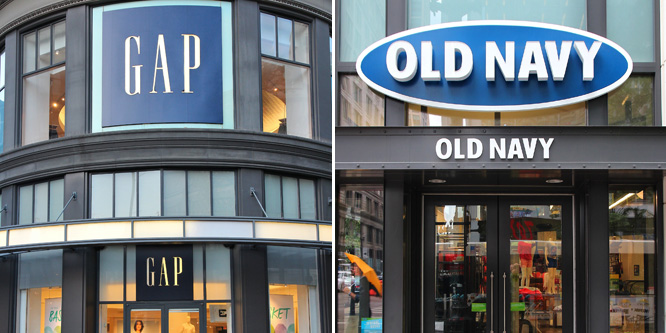 Gap and Old Navy are splitting up. Yesterday, parent company Gap Inc. announced plans to create two separate publicly traded companies. Old Navy will operate on its own and Gap, Athleta, Banana Republic, Hill City and Intermix will comprise another business currently being referred to as NewCo.

“Following a comprehensive review by the Gap Inc. Board of Directors, it’s clear that Old Navy’s business model and customers have increasingly diverged from our specialty brands over time, and each company now requires a different strategy to thrive moving forward,” said Robert Fisher, chairman of Gap Inc.’s board, in a statement.

“Recognizing that, we determined that pursuing a separation is the most compelling path forward for our brands — creating two separate companies with distinct financial profiles, tailored operating priorities and unique capital allocation strategies, both well positioned to achieve their strategic goals and create significant value for our customers, employees and shareholders,” he added.

Reactions to the announcement have shown enthusiasm for Old Navy’s prospects but less certainty about those of the Gap banner.

“Old Navy is Gap Inc.’s leading brand comprising 47 percent of sales in 2018 with margins that lead its portfolio,” said Christina Boni, vice president at Moody’s, in an emailed statement to RetailWire. “Old Navy continues to outpace Gap Brand and Banana Republic and is one the fastest-growing major apparel brands with comparable stores of three percent in 2018 growing to over $7.8 billion.”

For the Gap brand, however, there is a different story. The retailer saw its same-store sales fall five percent in the last fiscal year. Yesterday, Gap announced it would close 230 stores, about 20 percent of its total, over the next two years. The company expects its mix of Gap brand specialty stores, outlets and online will help reboot its business, projecting that 40 percent of total sales will be generated online with the balance being evenly split between its specialty and outlet locations.

DISCUSSION QUESTIONS: Will operating as a standalone company help or hurt Old Navy moving forward? How do you expect Gap and the other brands under the NewCo umbrella to fare?

Please practice The RetailWire Golden Rule when submitting your comments.
Braintrust
"While Old Navy now has a fighting chance, this doesn’t bode well for the other former Gap brands."

"Strictly a stock market move — it helps investors put their money into one of the few bricks retailers who are doing well now, and at the same time, keep an eye on Gap..."

"Too bad Gap is missing an awesome opportunity to extend the Athleta brand aesthetic into additional product classifications and brand extensions."

16 Comments on "What will going separate ways mean for Gap and Old Navy?"

This move will be excellent for Old Navy and if anything, will make the company more successful. However, this is also the first nail in the coffin for Gap and all their other brands. I would expect to see more consolidation and most likely eventually closing some if not all of the brands. Many retailers have fallen into the trap — during good times they over-expand either with additional brands or additional stores. Then they reach their peak only to find themselves completely overextended which is what Gap has been experiencing for a long time. Old Navy will become a robust standalone brand and, within a few years, I predict we’ll be saying goodbye to Gap’s other brands and most likely Gap itself as well unless they can develop something new and exciting that will attract new customers.

This was a good strategic move. Gap has become a drag on the fast growing Old Navy business. Splitting the two will enable Old Navy to continue on its strong path and create a more compelling story for investors. It’s hard to say how the NewCo will do – it appears to be where the Gap’s “broken toys” banners go to be rationalized. The reality is they probably don’t yet know what they’ll do with NewCo, the immediate imperative is to separate their winner Old Navy from the others.

Freeing Old Navy from the baggage of Gap is great news for the brand. I have no doubt that it can succeed on its own. For the other brands – especially Gap and Banana – the news is not so good. Their performance is now much more exposed. I don’t believe Gap in particular has done all that much to remedy its problems. Management talks a good game, but action on the ground is severely lacking!

I’m not viewing this as a news event. It’s a marketing event to the financial community. So now Old Navy is a stand alone. So what? How are any of Gap’s problems now more easily solved? Does Athleta now have more room to grow? So now Old Navy can get the multiple it deserves. Cue thunderous applause from the financial market. And listen hard for the crickets from the consumer.

You bet, Jeff. This is all about finance. It’s not separating the brands, it’s separating the companies. Old Navy stock plus NewCo stock will be worth more than the combined companies. Don’t be surprised to see some of the other companies spun off.

The brand formerly known as Gap is giving Old Navy a chance to shine. But in doing so, it’s putting Gap, Banana Republic, and other retailers that will make up “NewCo” at a disadvantage. This could have been an opportunity for a fresh start for Gap. Instead it’s simply putting the NewCo brands though the ringer for another cycle of rinse and repeat by keeping the same tired leadership at the top. We can see who the favorite child is here – simply look at which brand has a name and which doesn’t. The lack of a name is another indicator that the brand has lost its way – if it doesn’t know who it is how can it know who its shopper is? This isn’t going to instill investor confidence. More importantly, this isn’t going to instill customer confidence. VF Corp executed a similar move when they spun off Lee and Wrangler jeans into an independent public company. However, this was based on an understanding that the jean brands were different from the rest… Read more »
1
|
0
-   Share

Spinning Old Navy off into a separate entity will allow it to thrive but also reinforce two possible outcomes for Gap. Either the days of Old Navy cannibalizing Gap and the muddle between the brands will be over for good and Gap will finally step out with compelling distinction, or the spotlight on Gap’s weaknesses will shine even brighter and the end is nigh. The significance of the corporate name change shouldn’t be overlooked in the meantime. Many apparel companies have been hobbled by maintaining a single-brand corporate banner even as they attempt to become true portfolio companies (think Liz Claiborne, Coach and several others). The NewCo moniker will neutralize the expectation of Gap carrying most of the weight and allow the company to build its portfolio further — perhaps even to the degree that if the Gap brand itself disappears, no one will notice.

This plan to let Old Navy thrive is a good one. Especially since H&M is closing stores. Gap will have to re-think what it stands for, which to many shoppers is not much of anything. A tough place to be in today’s market.

Retailers appealing to “the middle” are an endangered species, none more so than Gap. By creating and building out “budget” and “better” brands, Gap Stores sealed its own fate a long time ago. (Of course, Banana Republic has its own issues along with many other mall-based specialty apparel retailers.) There’s little doubt that this move is good for Old Navy — provided that it can still enjoy some economies of scale with the other Gap divisions — but the lingering question is whether the rest of the brands can be turned around or even saved.

As a former Gapper I hope this separation doesn’t mean what I think it means, but I am afraid that it does. Gap has offered different versions of the same apparel since the ’70s, its inability to move on is apparent even to consumers.

Old Navy is different from its sister brands Gap and Banana Republic. Its offerings are fresh, fun and affordable. Old Navy will continue to thrive on its own.

Strictly a stock market move — it helps investors put their money into one of the few bricks retailers who are doing well now, and at the same time, keep an eye on Gap so if Neil ever turns that ocean liner around, it’ll be more obvious and um, invest-able again.

Also it gives more operational autonomy to all their brands which, at the end of the day, is a good thing and a bad thing for obvious reasons: we now see just how good/bad you really are. Abercrombie I’m sure is thinking about this same move with Holister and perhaps even Victoria’s Secret and Bath & Body Works. It’s a money person trend.

What took them so long?

I’m hoping that this decision, which is great for brand success Old Navy, will also cause leadership to reevaluate the brand promise, position and products for Gap and Banana which have lost their way.

Too bad Gap is missing an awesome opportunity to extend the Athleta brand aesthetic into additional product classifications and brand extensions. Athleta’s modern approach to athleisure is the counterbalance to Old Navy’s design tweaked basics. Gap and Banana Republic have failed to reinvent themselves over the past 30 years. Athleta is the opportunity for NewCo to replace lost Gap and BR revenue. Athleta’s design aesthetic and product quality is top notch, yet many consumers do not know of Athleta.

Athleta — hiding in plain sight. A polished jewel, ready to be commercialized beyond athleisure. A design director’s dream!

It’s common when businesses operate radically different segments — and particularly when the segments perform differently — to advocate splitting them. But is there any reason to think a bad big company will suddenly become two good smaller companies — frequently the advocacy is mindless, just as was the conglomerate fad in the ’50s-’70s, which created many of them. Or will it just become two bad companies, or one good company and one bad one that no one wants? (And if it’s the latter, then why not just close the bad segment outright?)

I’m not sure where in the spectrum GAP falls, but nothing they’ve done in the past decade makes me think it won’t simply be two smaller companies, making the same mistakes, but with even fewer resources to deal with them.

Great for Old Navy. Say goodbye to the Gap.

Braintrust
"While Old Navy now has a fighting chance, this doesn’t bode well for the other former Gap brands."

"Strictly a stock market move — it helps investors put their money into one of the few bricks retailers who are doing well now, and at the same time, keep an eye on Gap..."

"Too bad Gap is missing an awesome opportunity to extend the Athleta brand aesthetic into additional product classifications and brand extensions."