What should Staples do differently now that it is going private? 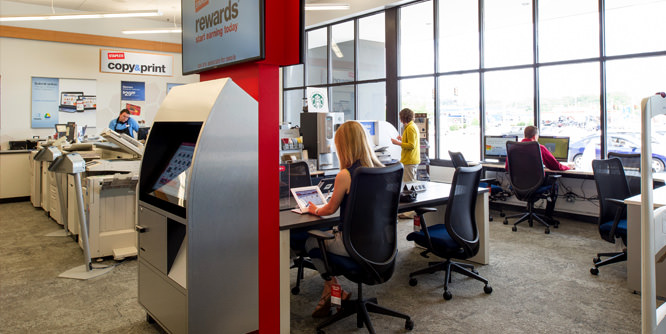 Last week, long-struggling Staples agreed to be acquired by Sycamore Partners in a deal worth $6.9 billion.

Going private is expected to help Staples tackle initiatives that may have disappointed public stock holders. Fred Foulkes, a professor of organizational behavior in the Boston University Questrom School of Business, told the Milford Daily News, “They can really do things that they think are right for them in the long run.”

The moves may include significantly reducing expenses through layoffs, streamlining efforts and initiating further store closings. The company now has about 1,500 stores, down from approximately 2,300 in 2012. E-commerce is expected to account for 80 percent of revenues by 2020, up from 60 percent currently.

Sycamore seems ready to support Staples’ new push to further reposition itself closer to business services. In May, Staples launched the first marketing campaign in its history focused on its B2B division rather than retail. The majority of its revenues come from deliveries to B2B accounts.

Said Stefan Kaluzny, managing director of Sycamore Partners, in a statement, “We have tremendous confidence in CEO Shira Goodman and great respect for the Staples management team and are excited about this opportunity to partner with them to accelerate long-term profitability.”

Staples could also seek to revisit its merger with Office Depot, which was blocked last April but may find a friendlier path under the Trump administration.

While Staples is a category leader and well ahead of most other brick & mortars in shifting to online selling, businesses are using less paper, ink and other office supplies. The company also faces heightened competition in office supplies from Amazon

Staples has relatively little debt (about $1 billion in total) and may be able to better handle the move to private ownership that has led to defaults recently by a number of other retailers. But some believe it depends on whether Sycamore uses any free cash to pay off the debt.

Lauren Silva Laughlin wrote for Reuters, “Sycamore can prod the company to pay dividends or invest in propping up EBITDA — but probably not both.”

DISCUSSION QUESTIONS: What should Staples’ next move be now that the company has gone private? What strengths should management be looking to capitalize on?

Please practice The RetailWire Golden Rule when submitting your comments.
Braintrust
"Staples should embark upon a segmentation study of the B2B customers it intends to focus on, in order to learn how to best serve their needs."

"I hate being the negative guy here but I do not see real long-term success for Staples under the ownership of Sycamore Partners."

"This may be too tactical, but when all reasonable ideas fail, sell coffee."

11 Comments on "What should Staples do differently now that it is going private?"

Staples has upped its game on the technology side. They sell more laptops, desktops, printers, networking hardware and tech gear than they have in the past. To make the service part stick, privatization gives them the breathing room to tinker with an experience center like Apples stores. Doing this would hook SMB and micro-SMB customers with the appeal of being trusted tech brains. Expanding the customer experience could pay dividends, even if it takes some time to deploy.

Staples should embark upon a segmentation study of the B2B customers it intends to focus on, in order to learn how to best serve the stated and unmet needs of these customers. They should worry less about the average consumer journey and take a “hedgehog” approach to serving business. The differentiation allows for fewer stores, a well thought-out online journey and fewer employees trying to stack shelves in aisles that matter less to the business buyer.

Usually the first thing private equity does is take on massive amounts of debt and pay investors back. The strength to capitalize on is the line of credit. Then make drastic cuts in labor while at the same time raising prices. If there is any real estate owned, sell it and lease it back. Cut expenses to the bone. Make sure lots of press releases are sent out saying how there are big plans to improve the business. Milk as much of the cash flow as possible and pay dividends to the investors.

Better customer experience in-store and better links to customers that activate store visits are the next step in Staples’ success. Activating supplier information to provide product features and benefits that enable the comparison shopper, endless aisle, inventory visibility with ship-to-store or home/office and better wayfinding should be top priorities. The Genius Bar/Geek Squad approaches to sales support and activating service revenues are bigger changes that will generate more revenue through improved service and customer experience. In their change management framework, immediate wins can be realized by implementing more digital experiences which will serve to better engage suppliers in the retail partnership. Staples has nowhere to go but up in this robust retail category.

I hate being the negative guy here but I do not see real long-term success for Staples under the ownership of Sycamore Partners. Staples may have had only $1 billion in debt, but once they complete the deal, Staples will have that $1 billion plus the $6.9 billion Sycamore paid for the company. As with many private equity firms, they will strip out assets wherever possible and turn them into cash. I would expect to see Sycamore Partners sell the Staples Framingham home office complex with Sycamore pocketing the money and Staples possibly moving or, either way, having to pay rent. So what do I see? The usual private equity takeover. The stockholders are elated because they make a killing, but in time if sales do not reach the goals (and often they’re unattainable) we’ll eventually put Staples on the list along with Sports Authority, Gordmans and others where the only people who come out ahead are those at the private equity firm.

As Marc Benioff once said, speed is the new currency of business. If Staples understands this and doubles down on its B2B focus, they could bridge the gap between physical retail and digital/tech support through a hybrid in-store/remote tech support service similar to CDW. SMB owners and endusers could essentially pop in for services to the stores instead of paying for an internal IT staff, which could be cost prohibitive. This would entail a large transformation and clearly one more easily achievable with private ownership.

The reboot of Staples offers the opportunity to focus on the two retail fundamentals of traffic and conversion, with emphasis on leveraging their large existing base of shoppers. These priorities should be seen as the building blocks of brand development. Telephone calls should go out to Headcount so that the base of analytics and dashboards can be refined, while briefings on digital experience can be requested from firms deeply rooted in providing in-store digital promotion and merchandising and engagement capabilities such as Reflect Systems, Cineplex, Stratacache, Maxmedia and others. Staples can leapfrog category competitors and implement approaches quickly by drawing on provider expertise.

Going private is a major first step toward buying Staples the freedom it needs to make the changes necessary for not just survival, but profitable growth. And Shira Goodman is as good an analytic thinker as you can find running a retail organization. That said, I would like to see that freedom and that analytic power addressing a more creative positioning than traditional “B2C” and/or “B2B.” The world has changed significantly and, frankly, the business services space is about as crowded as outsourced tech support and repairs. What Staples needs is a bold redefinition of mission. Why fight for the right to be the lowest cost provider of printer paper or ink — whether to individuals or corporations — when you could be using your new found freedom to reinvent the rules of the game? Staples’ executives might ask themselves provocative questions such as, “What could an office products retailer be if it wasn’t focused on traditional retailing of office products, on or offline?” It seems old rock ‘n rollers go to Memphis to live… Read more »
1
|
0
-   Share

This may be too tactical, but when all reasonable ideas fail, sell coffee. In this case, there may be some potential to try to get more home office workers to visit and stay a while. Hate having to run out for paper, ink and other office supplies so I usually order them online. Could easily be persuaded to visit a physical store for a break from the daily routine if it was more than to pick up a necessity.

Find a way to create enough open work/meeting spaces to draw some visitors for a few hours who would then pick up the necessities and a few extra items – and perhaps a coffee.

It’s hard for me to understand what Sycamore is after here. The traditional explanation is that a company was “underperforming” and so the new owners turn things around and sell the new and improved entity for a profit. Sometimes that’s a reality, and sometimes it’s just a fable — the “new improved” model has been stripped under the hood, and is sold to unsuspecting buyers.

But what evidence of “underperformance” is there here? It seems — to most of us, I’m sure — that the paper and ink business is in a long-term death march, and even worse, everyone knows it. Perhaps Sycamore doesn’t believe that, and maybe they have the numbers to support their faith, but it’s hard to see it from the outside.

Staples has an opportunity to innovate with long-term vision as a private company that they could not risk as a public entity.

Given their high proportion of ecommerce revenue vs store revenue, this should be a warning sign to management that something is amiss with stores.They should rethink the in-store experience and refocus it on the business customer they are serving online. This should allow them to develop new services focusing on their increasing technology sales. The difficulty for Staples will be in what Sycamore really wants to get out of them. Typically this sort of purchase results in many assets being sold (especially real estate) to produce more cash.

Ultimately, Staples should emerge a better retailer with the right mix of online and physical sales with both feeding each other not competing for the customer.

Braintrust
"Staples should embark upon a segmentation study of the B2B customers it intends to focus on, in order to learn how to best serve their needs."

"I hate being the negative guy here but I do not see real long-term success for Staples under the ownership of Sycamore Partners."

"This may be too tactical, but when all reasonable ideas fail, sell coffee."