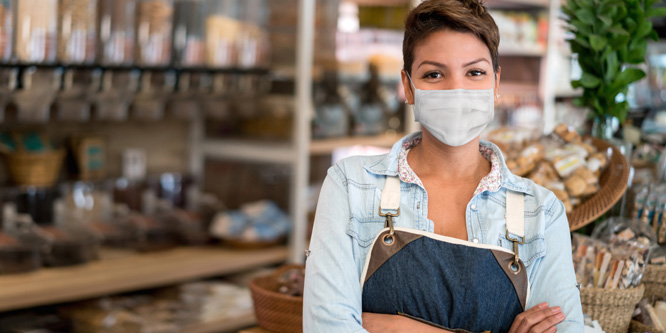 The job has become increasingly tech-savvy. Blue Yonder’s “Voice of the Store Manager” survey from 2017 found order fulfillment and limited staffing tied as the biggest challenge for store managers, cited by 29 percent; followed by inventory visibility, at 24 percent.

Having the right attitude and being open to feedback, however, is a core trait of managers that are a cut above.

“Great store managers consistently focus on the simple things, they do them well and every single day,” wrote the Australian Retailers Association in a blog entry. “Apart from being great role models, which is imperative to gain and maintain respect, they hold their team accountable for their performance. They communicate frequently and clearly ensuring all the team know where they and the store is at, whether they work full time or only for a few hours.”

An article from NOBL Academy observed how Apple Stores communicate to associates as adults. The article stated, “Retail store managers have made a point of empowering employees, but never lose sight of the end goal of delivering a better experience for the customer. Managers repeat this value over and over to employees in a way that elevates daily responsibilities and avoids condescension.”

While some might be naturals at motivating their teams, others require training and support.

“Maximizing productivity isn’t easy, especially for retail store managers who have to deal with achieving high sales targets with store staff that might be inexperienced, part-time or seasonal,” wrote Kevin Graff, president, Graff Retail and a RetailWire BrainTrust panelist in a blog post.

Bob Phibbs, CEO of The Retail Doctor and a BrainTrust panelist, believes in the benefits of working alongside teams and daily coaching. He said in a blog entry, “Great managers give their team more of a say in how they can contribute and do their jobs; they offer opportunities to learn and grow. Great managers encourage employees to suggest improvements and then listen to what they say. Those employees want to get to work because of the time their managers have put into making their day.”

DISCUSSION QUESTIONS: What are the hard and soft skill sets that make a successful store manager today? Has the store manager role become any more or less complex in recent years?

Please practice The RetailWire Golden Rule when submitting your comments.
Braintrust
"The most effective action I saw firsthand in my family’s supermarkets growing up was the store managers working with each new team members on their first day."

"I also believe that the people who run great stores are those who believe the store belongs to them and they run it like it was their own."

14 Comments on "What makes a great retail store manager?"

“Put me in, coach!” The leader is a great coach that inspires employees to do their best work. Ongoing reinforcement from the manager/leader lets employees know they are doing a great job. “Teaching opportunities” make employees feel good versus feeling criticized. Managers shouldn’t create fear with their employees. They should instill confidence.

Being a coach and a mentor makes a great store manager. Being a great listener and soliciting feedback is essential. A store leader must lead by example. Knowing your numbers, explaining the numbers to your department leads and disseminating those numbers to department associates is crucial to running a store successfully. I really believe that being strong in emotional intelligence (EQ) is crucial to managing so many different personalities and being a successful and respected store leader.

Having been a store manager for years I will tell you, there are two types: 1.) a “back room” manager who runs the store perfectly and is flawless about operations but is not so great on the floor and 2.) a “sales” manager who loves being out there, talking to customers and ringing the register, but is somewhat sloppy in terms of operations.

The combo of 1 and 2 is VERY hard to find and, I would say, almost impossible to ask of someone. Having said all of that, I can also tell you that it is #2 who gets promoted most often and sometimes to the home office as a future executive. Why? Because the end result of #2’s actions is a sales culture that drives more business. Operations flaws are excusable, but a lack of sales? Not so much.

Store managers are handling more tasks than I did in the 1980s, so organization, prioritization and decision skills are paramount. Additionally, managers should be on the sales floor the vast majority of the time. Get out of the back office and see what’s happening in your store. Get uncomfortable and engage your shoppers in the aisles. Ask what they’d like improved. Record their comments to analyze trends. And, most importantly, exhibit behaviors that you want your staff to emulate.

The most effective action I saw firsthand in my family’s supermarkets growing up was the store managers working with each new team members on their first day. This took the form of collecting carts and bagging with front end personnel, working with the department manager and the new employee to stock the shelves and even helping support service departments and backdoor receiving. The one-on-one interaction set the tone that the manager was willing to do everything that the new worker would be tasked to do. It also helped the manager further gauge the capabilities and passion of the employee.

As someone who spent many years managing grocery stores I have a clear point of view on this. While it’s become more complex since my days, being a retail store manager is still hard work: long hours, lots of interruptions, conflicting demands. Through all that the manager has to be aware, adept, available and, most of all, has to have built a team that is empowered to serve. Empathy, compassion, decisiveness, proactivity, responsibility – these are just a few of the skills needed to be successful.

Early in my career I was a store manager for several chains, most notably The Gap. This was before planograms and POS, and even fax machines; store managers did everything except buying and payroll. It’s a tough job and I give those who run stores a lot of credit.

I agree with everything Kevin and Bob said in the article but I also believe that the people who run great stores are those who believe the store belongs to them and they run it like it was their own. There is a difference in ambiance in stores like this and customers can feel it.

It’s definitely an increasingly complex role now. People skills will always be foremost when managing teams and customer service but today’s retail store managers need a certain level of skill with technology and must be open to constant change. I’ve seen too many stores where the store managers aren’t willing to upgrade technology because they don’t understand new sales channels. You don’t need to know how to execute everything but you can’t manage what you don’t understand.

Soft skills are important for all managers, store managers being no exception. Hard skills are important insofar as they allow managers to lead others and show how things need to be handled or managed. However it requires employee motivation to push them out of the break room and onto the floor, behind a counter, or into the stock room. Successful store managers build successful stores – and in most cases must have the focus on ensuring good operations through motivation and situational awareness. The complexity of the role varies tremendously by sub-vertical and each chain has its own nuances. What can be said is that COVID-19 threw a wrench into the difficulty of the role, with new policies to enforce, new tasks to train, and new ways of engaging customers.

To sum it up in just a few words.

With all the moving parts in today’s modern store operations, store managers have a tremendous challenge ahead of them! They need to motivate store associates, help them understand the store’s goals, corporate goals, and what all of that means to them when helping customers. As other have stated, acting as both coach and mentor makes all the difference in the world to the work attitudes employees carry with them all day while greeting and helping customers. Shoppers notice the difference between a store with happy employees and one without. Add to this mix the need to understand new technologies, and the store manager’s job has become more and more complex. Training is essential, and not just for the technology but on how to balance all of the operational requirements, people requirements, and operational requirements with all of that technology. Retailers that recognize these needs and act on them will produce better store managers as well as a path for other employees to follow to become those managers. Ultimately, treating store staff the right way will… Read more »
1
|
0
-   Share

Is store management a demanding job? A typical supermarket generates about $29 million in annual sales, and employs 100 or more associates, according to FMI Supermarket Facts. That means a store manager must have proficiency with both “hard” (financial and operational) and “soft” (people management) skills. The time-management challenge is simply enormous.

The addition of digital ordering and in-store order fulfillment has added greatly to the complexity of the job recently, creating new merchandise management requirements and new job descriptions.

That means it is incumbent upon top management to provide better decision-support tools and automate repetitive back-of-the house activities so that store managers and their key employees can be more available to handle shopper-facing activities in the front.

It may also be valuable to assess the management and leadership habits of the most successful store managers, document their best practices, and propagate them as chain-wide standards.

I totally agree with all the fantastic comments. The only thing I would add is that in today’s crazy environment, store managers who are are calm, focused and steady through constantly changing and difficult circumstances, model strength and resiliency to their teams which helps them get through it also. More than ever before, store managers need to be the voice of reason and strength that their teams can rely on.

The ability to identify and hire good talent is still the top requirement in my experience. They need to be able to find people who get it, want it and have the capacity to do the work. Then they need to develop them to help them get even better. An excellent store manager has to have a passion to deliver results. Be effective at delegating and following up to ensure the store is operationally excellent.

Braintrust
"The most effective action I saw firsthand in my family’s supermarkets growing up was the store managers working with each new team members on their first day."

"I also believe that the people who run great stores are those who believe the store belongs to them and they run it like it was their own."