What is Amazon’s ultimate Alexa strategy? 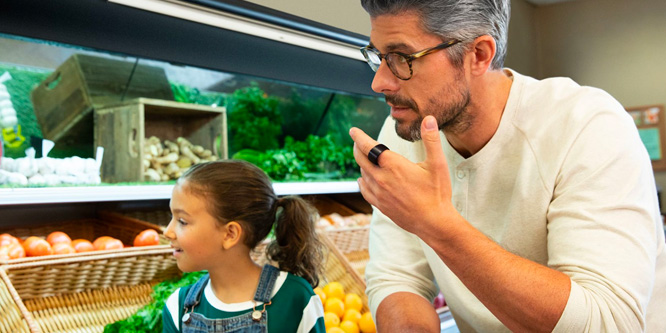 At its hardware event in Seattle last week, Amazon.com introduced a whopping 15 new products linked to its Alexa platform with the apparent goal of being a voice-command away from consumers at any time. Not everybody, however, is seeing the commerce connection.

Much speculation ensued on why Amazon launched so many items, including wireless earbuds, smart glasses, a smart ring and a multifunction oven that can double as a microwave and air fryer. Also being increasingly debated is whether Amazon needs to make money directly on Alexa-linked hardware devices and whether the ultimate benefits may extend beyond voice commerce.

In a blog entry following the event, Loup Ventures, a venture capital firm that publishes research on consumer technology, writes that Amazon’s Alexa ecosystem is “a bit of a head-scratcher” because voice shopping hasn’t taken off.

“It makes sense that Apple sells HomePod as part of its hardware + services model, or that Google gathers information from Google Home to sell ads,” Loup Ventures said in the blog entry. “But the buying experience on Alexa remains prohibitively challenging. So, it’s not clear what Amazon is really driving through voice other than low-margin device sales.”

In a note, Macquarie Research’s Ben Schachter wrote that he believes the Echo business model is “still evolving,” and that one way to monetize the platform will be taking a cut from developers of apps or “skills”. Mr. Schachter wrote, “We don’t think Amazon intends to make significant money from hardware sales directly, but rather from increasing touchpoints to the overall ecosystem and app store-like models.”

Daniel Newman, principal analyst at Futurum Research, wrote for MarketWatch, “The expansion of the Amazon line will power the company to another level of customer insights, which will lead to greater spending by you and greater earnings for the e-commerce giant.”

“With an increasing push to get its Alexa voice platform absolutely everywhere,” commented Navneet Alang, technology writer, in a column for The Week, “Amazon’s plans finally seem to be coming into focus: The company believes voice will supplant the smartphone as the next big platform.”

"Ever since Siri, marketers and technologists are thinking voice is the next big interface. Maybe so, maybe not, but it is too big of a risk for Amazon to not go all-in on this"

"Amazon is looking to create dependency on Alexa and voice-activation as a modality. The current roster of items on offer is geared to promote their gee-whiz tech halo."

15 Comments on "What is Amazon’s ultimate Alexa strategy?"

I think it is clear that Amazon sees tremendous potential with voice-activated technology. We’re getting closer every day to living like the Jetsons and like in the world of Star Trek. I see Amazon aspiring to be the leader of a company driven by technological conveniences. Apple has Siri, but Amazon is determined to take Alexa beyond what any other company is offering. Moreover, the public seems to be in favor of it as millions of consumers use Alexa every day for all kinds of things making their lives easier with fun and convenience. I see the trend continuing and, eventually, more companies following Amazon’s lead.

Alang mostly nails it, “Amazon believes voice will supplant the smartphone as the next big platform.” I would add that Amazon understands and continues to innovate both mobile and voice platforms – and understands that the two are not mutually exclusive. Amazon’s commitment to innovating is why they have disrupted multiple industries.

The downside is — have you seen the movie WALL-E?

I’ve been arguing against the naivete around Alexa for a long time. There is far from significant money in selling Echo devices and/or a supporting ecosystem of home automation hardware in comparison to the ongoing MASSIVE investment it takes to make VUIs (Voice User Interfaces) and make their underlying AI work in a reasonably human fashion. Amazon is a smart company. They would never go down that road unless two things were driving it: deeper data collection and voice commerce. Yes — voice-driven commerce. That is where the money is for Alexa. Comments about voice commerce not being well-received or not having taken off yet are ridiculous in light of the fact that in 1995 the same could be said about the internet and in 1999 the same for e-commerce. It — takes — time. The other crucial lost point among many is that voice alone is a limited interface for commerce, except for known goods, such as reordering one’s favorite ________ . In fact, each single interface modality has shortcomings. Humans are multi-sensory for… Read more »
4
|
0
-   Share

Very helpful in putting focus on the bigger picture and the longer-term time frame!

I continue to be amazed by Amazon’s ongoing investments in hardware while the platform desperately needs major investments in software. The concept of skills is a fatal flaw in the Echo ecosystem. The need to memorize skills is an insurmountable roadblock to adoption (let alone actually shopping anything but replenishment orders from Amazon), and until Amazon finds a way to make voice interaction as easy as “Googling” they are merely capitalizing on cheap device sales. I am mystified why they continue to expand the hardware ecosystem without addressing the skills challenge.

Amazon believes that Alexa will be its next big stepping stone into the future as we move to a voice-based input system for our device controls. So far, this has yet to be borne out in usage or demand. Alexa is a solution for a problem that has yet to appear. As such, Amazon has to be considering other alternatives in order to ensure that they are prepared for the future on all fronts.

Voice and mobile go together like peanut butter and jelly. Amazon doesn’t have a phone, so it needs to create multiple hardware solutions to be able to connect with consumers outside the home environment. There’s been a lot of emphasis on voice, but Amazon’s goal is to get in early and be the de facto driver for voice commerce, which is tough to do without a mobile device of its own. I suspect most of these devices will go the way of the Dash button, but Amazon has always been willing to invest to learn. This is one more example.

Amazon’s ultimate goal with the Alexa platform is to monetize voice search. As voice search becomes more pervasive, brands will be very interested in paying to get their ads on the top of the list. Currently, their Alexa advertising policy has strict rules against Alexa voice ads, but that may change…

Alexa’s purpose is to get intimate with consumers.

Embedding voice devices into our homes and everyday habits normalizes the technology. (Like Maria Conchita Alonzo’s apartment in The Running Man, where her voice turned on the lights, TV and coffee machine. It’s next-level convenience.)

It’s also a continuum of trust: As voice devices reliably help consumers with low-risk functions, like playing music, and checking the news and weather, we become more comfortable. Eventually more consumers will feel comfortable enough to use voice devices to shop to maximize efficiency and convenience.

While I am all for technology, I still have issues with the privacy aspect of Alexa.
I definitely would not like Alexa devices listening to my children or conversations with my wife and then getting emails or recommendations on items or services from Amazon learned from family conversations. If there was a more clear delineation of policy concerning conversations heard on Alexa devices (or any VA peripherals) maybe there would be a faster acceptance?

To take a line from The Terminator about Cyberdyne Systems’s SkyNet, I think Amazon’s ultimate Alexa strategy is total world domination. Seriously though, we are becoming more and more dependent on Alexa. It’s almost habit now to ask Alexa questions, even when I am nowhere near a device. There are plenty of us out there, myself included, who have not ordered product yet via voice, but I know that it’s coming. And soon.

Ever since Siri, marketers and technologists are thinking voice is the next big interface. Maybe so, maybe not, but it is too big of a risk for Amazon to not go all-in on this. So there are both offensive and defensive elements to Alexa. If Alexa is a source of information on how people live their lives at home or in their car (yes, Alexa is built into some models), then it adds to the segments they can offer for targeting. The ad tech side of Amazon is already north of $10 billion of 50 percent margin business. In addition, if voice activation can make buying easier, it adds to their advantage vs. other online retailers. Amazon has always been in the business of “simple” and voice/AI can be thought of as an extension of implementing that winning strategy.

Voice technology is the next big frontier for tech companies, Amazon included. By launching multiple products in multiple formats Amazon is effectively testing the market to see which products will resonate the most with consumers. Like many of its other initiatives, Amazon is going all-in on voice and is determined to offer the best and most compelling selection of products. And of course a byproduct of their aggressive push into the voice marketing is that they also bring more customers into the Amazon fold where they will continue to spend money on Amazon products and services, including their marketplace.

I’m with Georganne. These folks can afford to bomb on as many devices and interface ventures as they can dream up. They’ve proven that for years. But when one “sings”–and one will–they’re going to “own voice.” And they’ll get our voice purchases because it will be so easy. So many people still see Amazon as a commerce business and I do not agree: they are in the data business. They gather and use data in ways that lure us into giving up a LOT for the convenience they offer. They bought Whole Foods for data, and they’re now fueled to keep getting more and more of our lives in bits and bytes. Rumors are flying that they are going to buy Zillow and they have an active health practice going as well–which I think will be about healthcare. And when that happens, we’ll wearing body monitors for cheap healthcare. I know this sounds alarmist, but didn’t we once say, “Oh, Amazon could never sell more than books”? I just finished reading “The Four: The Hidden… Read more »
0
|
0
-   Share

Voice activation is as frictionless as it gets. Say it, buy it. Alexa is great for impulse buys and restocking too. Amazon is looking to create dependency on Alexa and voice-activation as a modality. The current roster of items on offer is geared to promote their gee-whiz tech halo.

"Ever since Siri, marketers and technologists are thinking voice is the next big interface. Maybe so, maybe not, but it is too big of a risk for Amazon to not go all-in on this"

"Amazon is looking to create dependency on Alexa and voice-activation as a modality. The current roster of items on offer is geared to promote their gee-whiz tech halo."