What happens when you put a c-store on wheels? 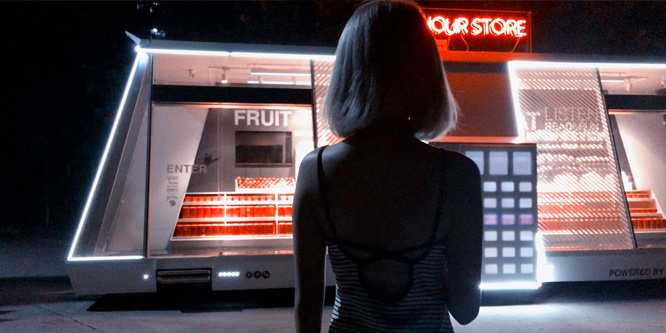 Automated checkout and drone delivery may one day change how we shop. And now, Swedish tech startup Wheelys has partnered with a Chinese university to create a mini-convenience store concept on wheels meant to make use of both technologies. Further, the “mobile c-store,” called Moby Mart, currently being beta tested in Shanghai, is being designed to one day drive itself to customers.

A promotional video for Moby Mart explains that customers can search via an app to find the store nearest to them, then ask the store to drive itself to the customer’s location. When the store arrives, shoppers can use their app to unlock the store, scan what they want and check out automatically. The video shows items such as fruit, bread and pastries as well as shoes available on the Moby Mart shelves.

The beta does offer some of the most important features, although, according to a Wired article, the existing version of Moby Mart is still human-controlled. And yet, given the rate of innovation with self-driving technology, it’s not hard to imagine Moby Mart soon hitting the road without training wheels.

While Amazon Go might be the most obvious point of comparison, other companies have also been working on technology that bears some resemblance to Moby Mart. For instance, Google patented a self-driving delivery truck last year that is fitted with individual lockers from which customers can collect packages.

While the intent may be to offer the convenience of autonomous drones and checkout-free grocery at once, Moby Mart may be susceptible to the technological challenges that both incipient models face.

A collision involving an entire store on wheels could be disastrous. And while it’s not entirely clear how Amazon Go will prevent shoplifting, the potential concern would be even greater with Moby Mart given that someone could lure the entire store somewhere in order to rob it.

DISCUSSION QUESTIONS: Do you see a Moby Mart-like concept as being viable in the U.S.? Does the concept solve any of the problems that nag drone delivery or does it create more?

Please practice The RetailWire Golden Rule when submitting your comments.
Braintrust
"It attempts to address gaps that current online-only retail experiences do not fully fill; those of browsing ability and impulse purchases."

"it does tap into the new belief that technology should be used to bring the world to me, rather than me experiencing the world as it waits for me."

"Are we so lazy now that we can’t drive to the convenience store?"

16 Comments on "What happens when you put a c-store on wheels?"

The Fuller Brush door-to-door salesman and the milkman must be laughing in their graves at the concept of store delivery to the door or neighborhood, since the physical store put them out of business. How the pendulum swings.

Do you remember the touch screen c-store in the Seoul train station hype? Turns out that was just a mock up by an ad agency. I get that same feeling with Moby here. It’s hard to imagine this beast wandering the streets of the suburbs or up and down North Ave. in Chicago. I’d stick with a human-operated version for about 1,000 reasons.

By itself it doesn’t solve anything. But it does tap into the new belief that technology should be used to bring the world to me, rather than me experiencing the world as it waits for me. However, drones and Moby Mart-like concepts have too many difficulties to overcome, as outlined here. The delivery concept mostly likely to stay is in the Amazon Fresh lane, where issues of shoplifting and collisions are not factors. Automated delivery just isn’t realistic. Yet.

This seems to be a very exciting concept. On the face of it, it attempts to address a gap that current online-only retail experiences do not fully fill; that of browsing ability and impulse purchases, which are difficult to get across through traditional online/app channels.

How this concept works in reality is another question. In addition to the concerns raised in the article about theft there is also the issue of congestion, particularly in urban areas. Perhaps when you request a Moby Mart you will have to build in some waiting time.

I’ll add to Lyle’s throwback thought — ice cream trucks. I can see the Moby Mart going from neighborhood to neighborhood, honking its horn or ringing a bell. Residents could come out (are lured out) and buy whatever impulse item suits them. That to me is the opportunity to generate even more revenue. But in this scenario, I think there would have to be an attendant for the Moby Mart. Yes, I know that ice cream trucks are still around. All the more reason why my scenario seems viable to me.

Joan we had the exact same initial thought! Part of our DNA now I guess!

A friend of mine has just launched a mobile skin cancer clinic which I think will be huge. So why not this?

If it comes soon enough there are lots of Baby Boomers who are still conditioned to salivate at the sound of the ice cream truck so maybe the Moby Mart can tap into that conditioning. The key will be the nature and variety of stuff it carries.

Interesting concept but I expect it to be a long time, if ever, before a self-driving c-store becomes a reality. Technical issues aside, the video carefully showed one driving down an empty street. In the real world you would have to “call” the store to your location and then wait for it to show up. Then there are all the issues of having one trying to make a stop in an urban environment; problems such as simply trying to find a parking space for something that large.

Are we so lazy now that we can’t drive to the convenience store? I really don’t know the stats on the c-store business these days but I do know it is a first stop for a lot of yard and construction workers to pick up their food for the day and, of course, a place to pick up that milk you just ran out of. This concept seems like overkill for those. The construction workers I see every morning come from various places and arrive together. It is far more convenient for them to come at one time together rather than wait for the mart to come to them. I suppose having a local c-store roll into the neighborhood like an ice cream truck, at a set time daily, might drum up more business for them though. Just not sure about the ROI.

It’s interesting that you bring up the construction workers and the coffee truck concept as this concept has legs and may be on to something bigger. I can see this model competing with food trucks to bring condiments and QSR to office parks and under-served urban areas.

It is quite possible to create a flat concrete space to which autonomous vehicles can self-drive so that on Monday a mobile c-store drives itself there, on another day a self-driving fashion truck is headed to the location and so on. There is an interesting opportunity with this concept that may be more interesting than Amazon’s drone delivery model.

Tencent WeChat already have a real working model in China called BingoBox and the YouTube video demonstration is pretty impressive. My first impression is that the ice cream truck is going to be replaced by Moby Mart offering kale and trail mix. The kids will not be happy.

I’m not certain what will happen when a thousand people ask the same “store” to drive to their location, however I do see an opportunity to bring the goods to the shopper. “Location, location, location!” — right?! Hey, crazier things have worked.

We are living in a time when technologists are exploring every possibility for solutions that will save us time or make our lives easier. I think it’s important to remember that just because a new tech solution is introduced, in this case Moby Mart, it does not mean there was a problem to solve in the first place. If we continue to seek out retail solutions that allow us to get everything at our beck and call while not moving far from our desks, we risk becoming a bit more sedentary and robot-like each day. The convenience store business itself is undergoing massive evolution right now, and the changes taking place as stores transform into meeting places that offer quality foods should be enough to engage consumers. Why we need to have an app-controlled vending machine roll up to our door is a mystery to me. I still prefer, as do many humans, a trip down the hall or across the street to get some fresh air, talk with a colleague and grab a hot… Read more »
2
|
0
-   Share

The interesting thing about this concept is that it combines the benefits of automated merchandising (“vending” for those of us who still remember cigarette machines in gas stations) for on-demand availability and mobile for on-location availability. Combining the two benefits is undeniably attractive. Is Moby Mart the ultimate execution? Of course not. What execution is the “ultimate” in this world of constant innovation? But something will be. And it won’t take as long as most of us think.

Anyone who doesn’t live and breathe the retail industry must be watching this video thinking technologists are desperate to eliminate every aspect of the “shopping experience” because surely people hate to shop and hate to have to go anywhere to shop for anything! Could this work in the US? Sure it could. Just as much as drone delivery and Amazon Go style checkout experiences. Does this solve a current problem? I don’t think so. But it does introduce a whole new set of issues to contend with! What happens when 100 people ask for the store at the same time? Or if 100 people show up at the store’s location — they can’t all fit at once! And when was the last time the local c-store was overcrowded? As an exploration of new ways we will buy products in the future, it’s an interesting video to analyze. While some parts of this will find their way into mainstream retail, it’s hard to imagine this working at large scale.

Delivery is one thing, but bringing the entire store to the customer… well, isn’t that convenient! Let’s see how this works. I can see having a store on location for peak hours in a specific area (business, industrial park, neighborhood, etc.), then moving to another location for their busy times. Or, maybe it’s like the ice cream truck that has a set route that delivers delicious ice cream treats to busy neighborhoods. Moby Mart is all about customer convenience. Let’s see how this works.

Braintrust
"It attempts to address gaps that current online-only retail experiences do not fully fill; those of browsing ability and impulse purchases."

"it does tap into the new belief that technology should be used to bring the world to me, rather than me experiencing the world as it waits for me."

"Are we so lazy now that we can’t drive to the convenience store?"