What happens if Amazon warehouse workers vote to unionize? 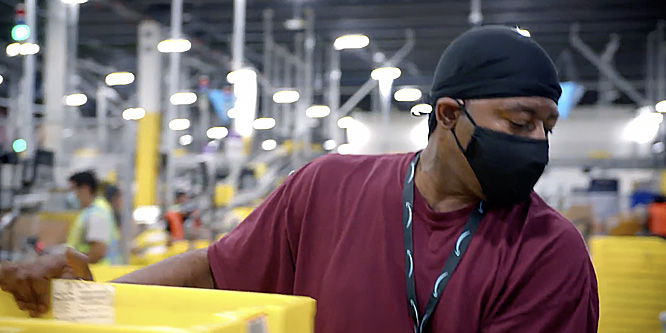 Employees at an Amazon.com warehouse in Bessemer, AL, will begin receiving ballots next week from the National Labor Relations board to vote on whether or not to be represented by the Retail, Wholesale and Department Store Union. The New York Times reported last month that more than 2,000 workers at the facility signed cards calling for the vote.

Amazon, which pays a starting wage of $15.30 an hour in a state with no minimum wage, also offers a dental, medical and vision insurance as well as a retirement plan and other benefits. The company contends that the 5,800+ workers at the warehouse do not need to be represented by any union. Voting for one, it contends, would essentially take money out of workers’ pockets in the form of dues, according to a Washington Post report.

On paper, it appears as though Amazon has made a strong case for itself. What management may be missing here is that employees complain that their job performance evaluations are based on unrealistic company-set goals. Some complain that they do not have time to take needed bathroom breaks.

The Post reported that the RWDSU’s organizing efforts have not been built on wage or benefit pitches alone. The union has focused on workers’ perception of unrealistic performance demands while advocating that collective representation can create the conditions for a workplace notable for the “respect and dignity” given to employees.

RWDSU president Stuart Applebaum told the paper, “We see this as much as a civil rights struggle as a labor struggle.”

Nelson Lichtenstein, a labor historian at the University of California, Santa Barbara, told the Times that a vote to unionize in Alabama “would have a huge ripple effect” that could extend to other Amazon facilities and other non-unionized companies.

Even if the Bessemer workers vote to unionize, there’s no guarantee of short-term improvements with many expecting that it will take years for Amazon and the RWDSU to negotiate a labor deal.

Another extenuating circumstance in this particular case is that the warehouse is located in a “right to work” state, which means that, even if a majority vote to be represented, workers will still have the option of not joining the union. The Wall Street Journal reports that some workers it interviewed said they would likely not join the union, even if their coworkers choose to do so.

DISCUSSION QUESTIONS: What effect would a successful vote to organize the warehouse in Bessemer, AL, have on Amazon at the facility and in the other locations where it has hourly workers? What are the implications for non-union retailers aside from Amazon?

Please practice The RetailWire Golden Rule when submitting your comments.
Braintrust
"Unionizing one warehouse will encourage Amazon to look at all their employee practices at all warehouses to help prevent further warehouses from voting to unionize."

"Workers don’t vote to form a union, they vote against management."

"Hmmm — so Amazon pays no federal income tax and its CEO is the world’s wealthiest man, but warehouse workers are penalized for going to the bathroom? What am I missing here?"

11 Comments on "What happens if Amazon warehouse workers vote to unionize?"

If the employees at the warehouse in Bessemer, AL vote to unionize, this will force Amazon to look closer at its work environments and policies. Amazon’s minimum wage and benefits are probably not a big concern for its employees but the right to be treated with dignity with fair performance measurements is important. Unionizing one warehouse will encourage Amazon to look at all their employee practices at all warehouses to help prevent further warehouses from voting to unionize.

Benefits are a HUGE concern for those of us that work under the Amazon umbrella. Amazon is notorious for hiring employees as “seasonal workers” that work 30+ hours per week (considered full-time hours), but not providing benefits because they are not “regular” workers. I fall into that category. I was hired as a “seasonal shopper” and always work 37.5 hours per week, again full-time hours, but I am not eligible for any benefits. My “contract” ended in December, yet I still work there and was told that my contract will not end unless I choose to leave. When year-end bonuses were given out “regular” workers received $300 and “seasonal” only received $150. This practice takes place all the time, and not just for shoppers – all store personnel and I am sure it takes place in warehouses too. Bottom line, Amazon tries to get away with hiring employees that work full-time hours, and taking advantage of them because they are “seasonal.” This is one of many reasons why I would like to see Amazon unionized.
2
|
0
-   Share

Amazon’s reputation for its employee management has not been great. I remember a pretty serious report by the New York Times about that in 2015. The response from Amazon has been what you would expect of a typical corporation and then some. Amazon is insisting on in-person ballots and does no want mail-in voting. Can anyone smell irony?

Workers don’t vote to form a union, they vote against management. In this case the underlying issue seems to be performance expectations. I am in no position to determine if the company’s expectations are justified or not, but given that this is not something that just recently happened, Amazon was negligent if they were not listening in terms of attempting to address this issue. Should the workers join a union, Amazon will certainly work to address any performance grievances workers have at its other warehouses.

Good point Steve! I once worked for a $5 billion private manufacturing company and they paid the factory workers well above industry average with a generous profit sharing program and working conditions were good. The company’s philosophy was that “companies that get unionized deserve it.”

I helped grow a retail company from 35 locations to 1,200. Our chairman’s mantra was, if you want good people threat them good. Worked well for us.

Hmmm — so Amazon pays no federal income tax and its CEO is the world’s wealthiest man, but warehouse workers are penalized for going to the bathroom? What am I missing here?

Interesting that you mentioned being penalized for using the restroom because this is, in fact, true. I work as an Amazon Prime Grocery Shopper. We use an iPhone to manage our orders. If we need to use the restroom, we must change our status from “Available” to “Performing Other Tasks.” However our “metrics” are monitored, and this includes our availability. Every time we use the restroom and change our status to “Performing Other Tasks,” our metrics decrease and we are penalized.

Amazon has some interesting characteristics for its warehouse workers and unionizing the warehouse would upend that given unions are designed with things like minimum hours guaranteed and other things.

One thing at Amazon which is interesting is what they call a “flex shift.” You basically sign up to work via an app and just take shifts as shifts become available in the app; shifts could just be 4 hours long, etc. They use this in the Amazon Fresh operation as well.

As far as employees complaining about not being able to take needed bathroom breaks — that is not good, but not exactly uncommon; go talk to a cashier in any retail store. They’ve been there too. Or a commuter stuck on public transportation that gets delayed or held up. Not discounting that being unable to get to the bathroom is problem, but that is not really a reason to call for a union representation.

It is one thing to “get stuck on a bus or train” and not being able to use a restroom. It is another thing to be “penalized” by your employer for needing to use a restroom. Yes, if the basic right to use a restroom while working is denied, then it does warrant the need for union representation. What next, am I supposed to wear a catheter!

The claim that Alabama “has no minimum wage” is a bit misleading: obviously it’s subject to Federal Law (which has one). That having been said, if Amazon is the worker’s paradise it claims to be — or even something close — we should expect to see the effort go nowhere. If it succeeds, well….

Braintrust
"Unionizing one warehouse will encourage Amazon to look at all their employee practices at all warehouses to help prevent further warehouses from voting to unionize."

"Workers don’t vote to form a union, they vote against management."

"Hmmm — so Amazon pays no federal income tax and its CEO is the world’s wealthiest man, but warehouse workers are penalized for going to the bathroom? What am I missing here?"