What happened this holiday selling season? 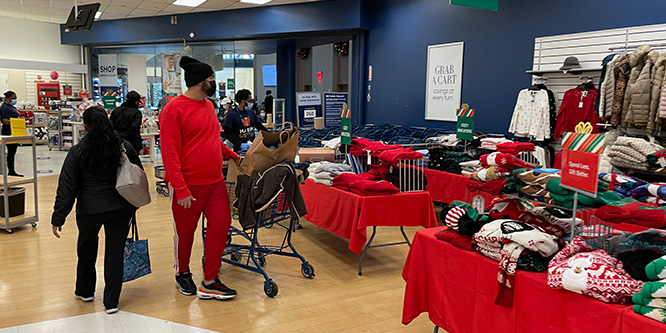 In the first major post-holiday report, Mastercard has projected U.S. retail sales grew 3.0 percent in the expanded selling season from Oct. 11 through Dec. 24, short of 2019’s four percent gain, but ahead of a forecast for 2.4 percent growth.

Mastercard SpendingPulse tracks online and in-store spending with all forms of payment.

The Wall Street Journal noted that Mastercard’s data showed U.S. retail sales rose only 2.4 percent for the two-month period — Nov. 1 to Christmas Eve — below the 3.6-to-5.2 percent growth predicted by NRF. The publication indicated a “more complete picture” of holiday spending won’t arrive until the government’s December figures and retail’s quarterly results arrive.

DISCUSSION QUESTIONS: How would you rate how the holiday selling season likely performed for most retailers versus plans? Which changes in holiday shopping behavior will clearly be considered to be pandemic-related when looking back in the years ahead?

Please practice The RetailWire Golden Rule when submitting your comments.
Braintrust
"If sales were up, I'll guess that great prices were an important reason."

"From data we track from retailers, I think this underestimates growth."

"...in general, the season proved to be quite positive considering all of the uncertainties and new challenges faced by both consumers and retailers this year."

12 Comments on "What happened this holiday selling season?"

I believe we didn’t know what we didn’t know going into an unknown event this season.
A lot of retailers did start early. Many retailers adapted quickly, adding BOPIS, curbside pickup and home delivery to their purchase options. Local seemed to receive extra emphasis this year (which was a great thing). Some of what we saw will become the norm again next holiday season – I believe the contactless transaction will become more refined and more seamless.

The big macro, average numbers tell us that the economy survived, but the swings out of apparel and into home will tell wildly different stories at the individual retailer level. I was shocked at how many empty fixtures I saw in some apparel stores (Macy’s) the week before Christmas. And in other stores it was obvious that fixtures had been taken off the floor (AEO). I don’t think that’s a bad thing. They planned conservatively and now don’t have an abundance of clearance to deal with. Let’s convert to forward seasons and get on with life. And I’m betting that new lessons were learned about inventory to sales ratios pre-Christmas and the profitability of lower levels of post-Christmas clearance to chew through.

As today’s other discussion points out, there is a lot of selling to be done during the week after Christmas — at least in a normal year, when clearance sales and promotions on “basic” categories help offset customer returns. So there is an incomplete picture of the 2020 season if you only count November 1st through Christmas Day.

That being said, the reported 2.4 percent increase ought to be viewed overall as a success under the most unusual circumstances that retailers have experienced in their lifetimes. (The NRF forecasts were overly optimistic, as usual but especially in 2020.) Once individual retailers report their results, the “winners and losers” are going to be very apparent:

We won’t know if these are anomalies or long-term trends until we get through a more “normal” 2021, but the movement toward online sales seems irreversible.

From data we track from retailers, I think this underestimates growth. Total core retail sales in October were up by over 10 percent, in November the same figure was up by around 8 percent. Initial data for December suggests that sales increased by 4 to 5 percent. Put this together and you end up with a pretty robust holiday season. However the spoils were not evenly distributed. Grocery drove a lot of growth as did home-related sectors. Outside of these categories, the performance was much more subdued and some segments like apparel and department stores saw strong declines.

Sales seemed to fall in line or slightly below where most folks expected (except NRF, whose predictions I always just multiply by 0.6 to get what the real number is likely to be). Spikes in COVID-19 and shipping delays likely explain the slight shortfall. Of course we must remember that we really don’t know what the holiday season looks like until returns get sorted out (which are likely to be higher this year than in the past) and gift cards get redeemed (which are also likely to be higher than past years). Overall it’s likely pretty solid, but as I point out in my recent Forbes article, it’s a tale of two cities.

Commenting purely as a consumer — there were astonishing deals this year, including $10 sweaters from a major department store and plenty of offers of 70 percent off. If sales were up, I’ll guess that great prices were an important reason.

Rating the holiday results vs. plans is highly dependent on the quality of the plan put in place. It goes without saying that there were massive shifts in demand and shopping behavior this holiday and the more adaptive retailers with proactive plans, better channel strategies and advanced inventory and demand analytics probably fared better than their competitors. As others have pointed out, a fairly “normal” macroeconomic number looks much different once you zoom in on different retail verticals where some retailers had a much steeper challenge than others. It remains to be seen what the final numbers will say but, in general, the season proved to be quite positive considering all of the uncertainties and new challenges faced by both consumers and retailers this year.

Early results suggest that we’re likely going to see the continued pattern of “winners” and “others” through the holidays. The stores that were doing well before the holidays extended their gains, the stores and categories that were struggling had a tough time. I will be interested to see the impact of deep discounts in apparel and home and how consumers responded. And to see if it was enough to move through the glut of inventory they’ve been dealing with.

This holiday shopping season was surely an anomaly for retail sales. In the end, online should be outpacing in-store sales just because of the logistical issues brought about by the pandemic. As the next COVID-19 surge hits following the post Christmas period, we will see even more changes in shopping as more of the nation undergoes stricter lockdowns.

This may end up being a holiday sales season of extremes. There will be strong winners, and some losers, largely category dependent. It appears retailers were successful in getting consumers to shop early and spread out those sales. E-commerce took a front seat but it’s not clear from the data yet how successful retailers were at replacing in-store sales with online sales. I find MasterCard data tends to reflect a slightly inflated view of the season, though not as overly optimistic as NRF. I suspect we’ll see large mass merchandisers tell a story of big sales gains, mostly from e-commerce and curbside pickup, with categories like apparel in the specialty segment not performing as well as they had hoped. Home goods and electronics likely did well. We’ll also need to see what happens with returns and gift card purchases to get the complete picture. What is clear is that in certain regions, in-store traffic was way down and we’ll have to see final data to know if digital sales compensated for that (they didn’t for… Read more »
1
|
0
-   Share

At this point I would question exactly what “plans” we’re (even) talking about: the ones created at the beginning of the year? Or the revisions in March? July? November….

Right now anyone who’s still in business should feel a bit relieved — at least — and perhaps a bit proud too (to the extent that their efforts helped that to occur). More serious analysis should wait a few weeks, at least, until all the returns are in (in every sense of the word).

This year was a year filled with unknowns. Customers and stores were navigating the tensions around coming into stores and staying home. Some jurisdictions had capacity controls. Stores were also unsure would shoppers come or not, and so inventory was much lower, and stores also pushed great deals and prices, which may have also reduced spending.

Consumers were dealing with conflicting messages about stimulus being extended or not, and with that uncertainty may have decided to hold back. While they may have not spent that money on travel, it doesn’t sound like that necessarily translated to the customer taking that savings to buy extra nice gifts.

To me the biggest question is where will margins hit, and for those stores that had lower margins, is it the continuation of eroding margins (for example in the Department/Specialty store sector). The margins, I believe, will tell the story about long-term viability.

Braintrust
"If sales were up, I'll guess that great prices were an important reason."

"From data we track from retailers, I think this underestimates growth."

"...in general, the season proved to be quite positive considering all of the uncertainties and new challenges faced by both consumers and retailers this year."