What does GameStop’s wild stock ride mean for retail? 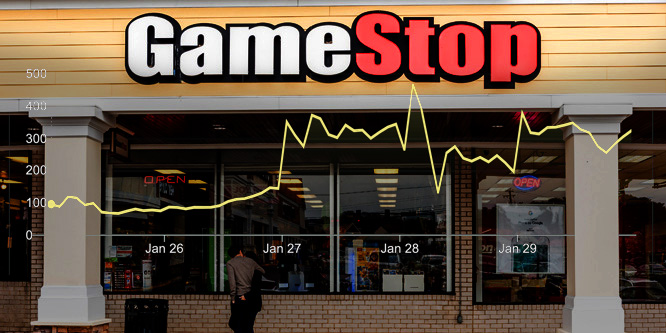 GameStop, like many retailers struggling in recent years due to digital disruption, has become the poster child of a short-squeeze battle pitting amateur retail traders against Wall Street short-sellers.

Day traders on Reddit joined together to drive the video game retailer’s stock price up over the last two weeks in an effort to capitalize on hedge fund short-sellers betting GameStop would follow the path of Blockbuster.

From just under $20 a share on Jan. 12, shares of GameStop skyrocketed as high as $483 last Thursday, Jan. 28. That day, the stock trading app, Robinhood, and other online brokerages clamped down and curbed trades. GameStop crashed to $112.25 but recovered to close at $325.00 on Friday as some restrictions were removed. Institutional investors have lost billions in a matter of days as they were forced to liquidate their positions.

GameStop’s shares are expected to eventually crash and return to trading multiples of its retail peers and in line with its fundamentals. GameStop just finished its second straight year of double-digit declines and traded as low as $2.57 in 2020.

The retailer may gain a fresh look from investors after the frenzy. The stock’s surge came after Chewy founder Ryan Cohen last year began accumulating GameStop’s shares and pushed for an accelerated online push. Some analysts see potential for GameStop to regroup around hardware and accessories that aren’t exposed in the way digital downloads are and take advantage of shortages of Xbox and PlayStation consoles. Yet GameStop could be perceived as another Enron as investor losses are chronicled.

For the broader market, near-term volatility is expected with American Airlines, AMC Entertainment and BlackBerry among other names seeing roller coaster rides. Regulators and legislators are promising crack downs to reduce investor risks. Last Thursday, Southeastern Grocers, the parent company of Winn-Dixie, canceled its initial public offering due to the market’s instability.

DISCUSSION QUESTIONS: Does the current system and the practice of shorting stock have concrete negative effects on retailers targeted by hedge funds and other, typically, institutional investors? What advice would you have for GameStop and other retailers with stock that has become vulnerable as a result of short squeeze speculation?

Please practice The RetailWire Golden Rule when submitting your comments.
Braintrust
"There are multiple angles to the GameStop phenomenon. But one thing is clear: it does not have much to do with GameStop being in retail. "

"I’m just praying that the newbie individual traders who think they made money last week actually take their money and run."

"My advice to the retailers is to concentrate on their business, not the value of their stock."

15 Comments on "What does GameStop’s wild stock ride mean for retail?"

There are multiple angles to the GameStop phenomenon. But one thing is clear: it does not have much to do with GameStop being in retail.

Any stock that is expected to crash would catch the fancy of short sellers. This time, the counterweight came from a totally unexpected group of individuals. If you see the conversation in the Reddit group, it has the makings of a movement. Whether this movement will sustain and spread to other stocks needs to be seen, but it is less likely. That is because the architecture is like a Ponzi scheme and someone will get caught holding a worthless stock at the end of the ride.

In this round, it appears the retail investors have not blinked yet, i.e., did not sell their stock. Once they start taking profits the tide will reverse.

The market capitalization of a company should, in an ideal world, reflect the current and future potential of its economic fundamentals. Shorting and other such maneuvers can divorce the valuation from reality, especially when done at scale. That said, people are entitled to take positions and transactions as they see fit, even if it does cause turbulence.

However I do think it is completely hypocritical for Wall Street hedge funds to bemoan the actions of casual investors for simply doing what many of them have been doing for years. This is a free market economy, not a cozy cartel of people who work on the Street of Dreams.

Market manipulation is nothing new — think back to the Dutch tulip mania and its subsequent market crash. What makes the GameStop trade (and similar events) different is the use of technology, and the emergence of small investors as a mass “us vs. them” force.

There may be some populist sentiment in support of those small investors, and in opposition to hedge funds betting on failure, but the underlying question is the health of the GameStop model. If its business prospects are as dim as the short-sellers believe, then its hyperinflated stock price is bound to crash soon. It’s hard to see a bright future for a brick-and-mortar retailer whose demand has been displaced by streaming technology and online gaming.

Shorting a stock as a reflection of an investor’s opinion regarding the future performance of the business is a valid position to take. But market makers have been gaming the system for decades. So cry me a river hedge funds. Turns out that when lots of small investors have the same idea, and a platform to enable that idea, the gaming can work in both directions. It’s pretty quickly obvious when a stock ceases being an investment and starts being a roulette wheel. Play at your own risk. It has nothing to do with business or market fundamentals and predictability is out the window.

The short answer is nothing. Typically, the stock’s price has to do with the market perception of the value of the company. In this case it was a game for those who drove the stock price up. One for which many will pay a hefty price.

Unfortunately, nothing could be done to prevent a future GameStop-like short squeeze speculation. Retailers and brands should focus their efforts on the business fundamentals, execution, and meeting their brand promise. In an ideal world an even playing field value of the stock should be a clear reflection of the company’s value.

While this Reddit-fueled short squeeze phenomenon may be short-lived, larger and more powerful hedge fund operations have fundamentally done the same thing for decades. In a free market retailers may find themselves caught up in the chaos, and it could cause some challenges for both the company and its investors.

While short term speculation may reap some rewards for the individual investor, this short squeezing strategy may not be as successful with other companies.

“Shorting” has concrete negative effects on any company – regardless of industry – whose stock is seen as vulnerable. As to advice, by the time short sellers fix on a stock the company is almost always already in trouble, so advice is only marginally helpful. To be honest, I’m surprised it’s taken this long for people to counter the exploitative tactics of Hedge funds. The Achilles’ heel – manipulating the manipulators – has always been there, though social media clearly makes it a lot easier.

I agree that what happened with GameStop has nothing to do with being in retail. I think the fallout will be focused on Robinhood and how it stopped trades for a while, knocking out the entire egalitarian perception (it was never egalitarian) of stock trading. I’m just praying that the newbie individual traders who think they made money last week actually take their money and run. While the hedge fund short sellers could handle the need to cover their investment, it would be so sad to see those who thought they made money not have anything to show for it in the end.

As a bystander, the reaction of the involved hedge funds is the most interesting to observe, exposing the manipulation and dichotomy of the “free market” economy controlled by the few. Gamesmanship and power beat out the little guy/gal until now.

For investors, the GameStop story is a little scary. For retailers, it should be business as usual. When the price of the stock becomes more important than the business itself, the business is in trouble. There are plenty of outside events that will impact the stock price that have nothing to do with good or bad earnings. Focus on the business and long term the stock price will represent the success or failure of the company.

Great free advertising, but will have nothing to do with the real value of GameStop and its ability to survive as a retail operation.

I somehow expect that for the long-term investors, these massive stock movements will be short term blips along otherwise slower/steadier trendlines. Can this market though really be a place for “investors” to methodically build portfolios and at the same time host momentum traders?

The sad irony is many companies are taken private to avoid nonsense just like this — well, OK, it’s at least a reason — which then often leads to its own set of shenanigans.

GameStop’s volatility has nothing to do with being a retail play. This volatility would exist no matter what industry GameStop was part of. It has to do with many short sellers getting caught in a short squeeze by long investors.

My advice to the retailers is to concentrate on their business, not the value of their stock. The stock market will go where investors push the stock based on the supply and demand for the shares.

Braintrust
"There are multiple angles to the GameStop phenomenon. But one thing is clear: it does not have much to do with GameStop being in retail. "

"I’m just praying that the newbie individual traders who think they made money last week actually take their money and run."

"My advice to the retailers is to concentrate on their business, not the value of their stock."