What does Alexa’s holiday win mean? 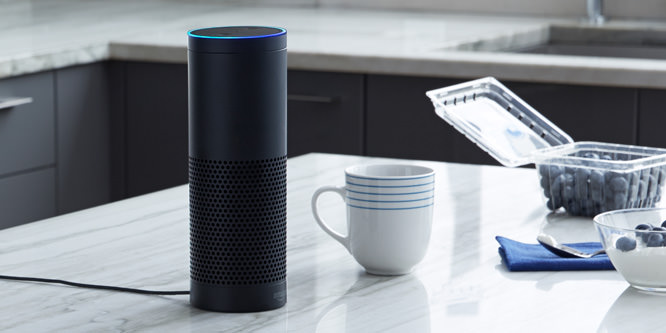 Was Alexa’s breakthrough success this holiday season largely a victory for Amazon? Or was it a broader win for smart home devices?

The top seller across categories was the smaller Echo Dot, which was launched earlier this year and offered over the holidays for $39.99, a 20 percent discount. Equally impressive were strong sales for Amazon Echo, which costs $179.99. Launched in 2014, Echo was estimated to have sold more than 5 million units before the holiday.

Besides the sales gains, Alexa continued to add more “skills” or tasks that furthered its lead over digital assistants such as Google Home. Said Jeff Wilke, CEO Worldwide Consumer, Amazon, in a statement, “From turning on Christmas lights and playing holiday music to shopping for gifts and asking for help with cookie recipes, Alexa continues to get smarter every day.”

At the same time, however, Alexa appears to have led the charge to introduce artificial intelligence into homes and raise awareness about connected devices.

Writing for Fast Company, Jared Newman suspects that in 2017 virtual assistants will start appearing in alarm clocks, lamps, TVs and possibly fridges, “letting you search Google or order items on Amazon from anywhere in the house.”

Mr. Newman said that while refrigerators aren’t yet able to reorder groceries, such technology is advancing and Amazon’s simple one-click Dash buttons already underscore the potential of connected shopping. He wrote, “The only question is whether Amazon will remain unchallenged, or other retailers will catch on.”

DISCUSSION QUESTIONS: Do you see Alexa’s holiday sales traction as a bigger win for Amazon or for the overall smart home opportunity? Do you see Alexa and other digital assistants greatly altering shopping habits in the year ahead?

Please practice The RetailWire Golden Rule when submitting your comments.
Braintrust
"Although Amazon has a great lead, the future is still unwritten. It’s still the early days and there is plenty of opportunity for innovations. "

"“Alexa continues to get smarter every day.” That’s the opportunity, but also the potential problem."

"I recently had a retailer tell me to stop talking about Amazon. My reply was, “how?”"

13 Comments on "What does Alexa’s holiday win mean?"

Even though “millions sold” during the holidays, we are still at the beginning of the digital assistant revolution. That said, Echo’s sales were a clear win for Amazon. As the company expands the device’s capabilities, and more products are able to link with it, consumers will come to rely on Alexa to perform tasks, order goods and organize their lives.

Short-term this is an Amazon win but, ultimately, it’s the tip of the iceberg for new consumer interactions with digital. I chuckle at (often older) pundits who react with disdain when I talk about “tired old click and touch interfaces” because they can’t see anything beyond what has become mainstream over the last 20 years. The reality is that AI and complimentary interface technologies like voice, machine vision and emotional sensing are rapidly moving towards commonality and again changing how people interact with things, brands and one another. Just like radio scoffed at the advent of TV, this is absolutely where digital is headed. So for now, Amazon has big early mover advantages. In fact, they opened up the Alexa ecosystem to be brand and developer’s first choice and to maintain that for as long as possible.

That said, although Amazon has a great lead, the future is still unwritten. It’s still the early days and there is plenty of opportunity for innovations and new business models in this arena.

“Alexa continues to get smarter every day.” That’s the opportunity, but also the potential problem. The presence of a listening device in the home may not seem like an issue to many Americans, but the moment it’s hacked, and/or people realize what it’s sharing, they may change their minds.

I’m not an early adopter of smart home technology, but I’m intrigued by Amazon’s new devices and I’m sure plenty of other consumers are, too. I see it as another win for Amazon despite competition from Google — because Alexa is wired into the Amazon ecosystem, not just the Internet of Things at home. It’s hard for Google or anybody else to compete against that.

Amazon’s ability to bring together different technologies that redefine convenience and raise consumer expectations — and to do it at scale — is losing the surprise factor. This is dangerous for Amazon, as it becomes more difficult to meet rising expectations, as well as for competitors who may cede the battle. But it is surely an enviable position to be in as it continues to generate its own tailwinds.

Nevertheless, what we’re seeing in this case from the holiday spending is the trust consumers have placed in Amazon and their appetite for “gadgets” that add convenience and reduce effort/friction in doing what they want to do. Voice may be viewed by many as a marginal technology application in the artificial intelligence arena, but it has tremendous potential to disrupt user interfaces and brand experience. Amazon bringing AI technology into the consumer mainstream brought practical applications and use cases.

Full disclosure: we love Alexa in our house.

Of course we are in the early days of IoT. But my bet is on Amazon for one very basic reason. Google and other digital ecosystems help you find things. That’s great. But the Amazon ecosystem helps you DO things. Necessary things, like remember milk or to order more pods for the Nespresso machine (Santa came from Spain this year!) Google or other challengers (can Samsung and Nokia be far behind?) will make inroads — particularly with home automation for things like lights, music and HVAC control. But if you have an appliance that holds “stuff,” say, a refrigerator, then you wanted it connecting to the place you buy stuff — and that’s Amazon.

I am usually not an early adopter or accepter of new technology. Alexa has me intrigued. It just might become my wife’s birthday present.

Alexa by itself is great. But there is so much more (as we know) to Alexa. “She” is a great opportunity for Amazon and other retailers, but also a great opportunity for a customer to have a great experience. Setting the temperature on a thermostat, turning on and off lights, buying movie tickets, ordering a pizza or purchasing product from Amazon … This is just the beginning. Just as Amazon’s website changed retail, so will Alexa (and Alexa-like) technology.

I think some folks are missing the forest for the trees. To me, it is Alexa’s voice-activated nature that is intriguing, not whether or not you now have one more way to turn your houselights on and off. Smart home technology is advancing, with or without Amazon.

With all due respect to the Fast Company article that was mentioned, grocery reordering technologies have been around for over 20 years, they just aren’t commercial yet. So the question isn’t whether Alexa-related sales give Amazon an edge in smart homes but rather whether or not Alexa devices give Amazon an edge in voice-activated technologies and if that edge is sufficient to help them gain even more traction as part of consumers’ personal digital ecologies. Build an attractive enough digital mousetrap, bait it with the simplest interface — voice activation — and why should a consumer look beyond Amazon to satisfy his or her shopping needs? And of course, smart home technologies are part of that digital ecology, but they aren’t the drivers.

When do I start to worry that Alexa, having consulted with my medical records, refuses to order the ice cream I wanted and won’t place my pizza order? I halfway expect Google Maps to park my car on the side of the road for a reroute time-out the third time I don’t follow directions.

I recently had a retailer tell me to stop talking about Amazon. My reply was, “how?” What other retailer had the foresight to put a device to help you with (fill in the blank) inside your home that will oh-by-the-way also quickly get you anything you need … from them? Right — none.

I may be wrong about this, but I would hope to see Walmart and any other retailer capable of competing with AMZ get on the ball and follow suit. Otherwise, if your main competitor is in everyone’s home and you aren’t, how long till they clock you for good? Right — not long.

Home automation has long been a tantalizing idea, with very low adoption and traction because of the lack of standards and the high costs of outfitting the home with the necessary technology components. We’re now seeing a tipping point approaching as big consumer players (Amazon, Apple, Google) race to stake a claim and get consumers locked into their respective platforms. The Echo products, powered by the Alexa virtual assistant, create a low-hurdle starting point for consumers. The assistant’s ability to easily facilitate commerce transactions is compelling, but it’s only part of the story. The hooks in the system to assist with music, movies, and other daily activities will continue to be a big driver of adoption. Component manufacturers (Sonos, Philips, etc) will benefit from the adoption of the virtual assistants, creating a jumping off point for consumers to incrementally add more home automation elements and expand their usage. I am interested to see if tech services companies like Geek Squad will make it easier for consumers by providing programs for in-home installation, training, and support… Read more »
0
|
0
-   Share

Amazon Echo, like Google Home and other first-wave voice-controllers, clever as they may be, are really just transitional technology. When your thermostats, lights, door locks, security alarms, entertainment centers, major appliances, window blinds, robot cleaners and even the cars in your garage are all web-connected things, we humans require a universal way to connect with them too. Touch-screens and keyboards are too clumsy. Voice seems like the way to go. The sales surge this holiday season is a reflection of the moderate entry-level price points and sunk investments already made by early adopters in various IoT devices for the home. Listening devices like the one inside Echo Dot are likely to proliferate or even come built into other IoT devices. The hardware is already a trivial trick, limited only by the designer’s imagination. The heart of these systems is a voice operating system that can be configured to control just about anything. If the prospect of an always-listening mic in the family room is too chilling for you, I think you can still get by… Read more »
0
|
0
-   Share

Braintrust
"Although Amazon has a great lead, the future is still unwritten. It’s still the early days and there is plenty of opportunity for innovations. "

"“Alexa continues to get smarter every day.” That’s the opportunity, but also the potential problem."

"I recently had a retailer tell me to stop talking about Amazon. My reply was, “how?”"