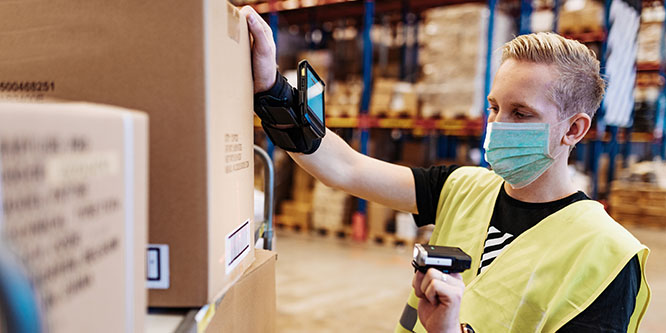 Forty-nine percent of supply chain leaders have accelerated spending in digital technologies to make their operations more responsive and forward-looking during the pandemic, according to “Innovation Driven Resilience” an annual industry report from the Material Handling Industry (MHI) trade organization.

The survey of over 1,000 manufacturing and supply chain leaders from a range of industries done in collaboration with Deloitte found 83 percent believe digital supply chains will be the predominant model within just five years versus only 22 percent that believe they are now.

Many technologies are expected to reach widespread adoption over the next three to five years, including:

A survey last fall of 450 supply chain decision-makers in the U.S. from Interos overwhelmingly agreed (97 percent) that better visibility into their suppliers is imperative, but less than half (44 percent) currently have a single solution for monitoring their entire supply chain. Ninety-one percent agree that a streamlined way to continuously monitor the entire supply chain for risks would have helped their supply chain to be more resilient against the disruption caused by the pandemic.

A new study from Gartner stressed the importance of focusing on long-term goals and adapting to structural shifts, such as new technologies and changing competitive dynamics, in overcoming supply chain disruption.

“Disruption is not a short-term situation, but a long-term trend that will most likely accelerate as we face climate change impacts, global power balance shifts and more,” said Simon Bailey, senior director analyst at Gartner, in a statement.

DISCUSSION QUESTIONS: Which emerging digital technologies cited in the article will be most beneficial in managing future disruption across the supply chain? Which do you think are less practical?

Please practice The RetailWire Golden Rule when submitting your comments.
Braintrust
"Investments that eliminate data silos to provide a consistent, real-time view of what is happening end-to-end are the single biggest benefit area for supply chain. "

"We’ll continue to see more robotics in warehouses (co-bots in particular that work alongside people), and more retailers looking for best-in-breed tools..."

"I would put sensing and technology like the ability to build a digital twin to do what-iffing and scenario modeling to be very important."

All of the digital capabilities are beneficial to improving the efficiencies of supply chains; however I think IoT and robotics will see a significant increase in adoption in the next few years. With new innovations and reduced costs of RFID and other technology the ROI on IoT and robotics is becoming very compelling.

It is important to look at what business capabilities matter and then look for technology that enables it. Digital technologies by themselves do not matter. For instance, blockchain is transformative for medical devices, luxury goods, or high-end electronics manufacturers where a chain of ownership is critical to assure trust in the product. For low-value products, not so much.

Perfect response Suresh. I strongly advocate for a capability-based approach to technology enablement.

Any technology that can enhance visibility but, more importantly, add intelligence into the supply chain will be the most beneficial. Industrial IoT combined with AI and analytics will provide the most value to companies and their supply chains in the next five years. And for certain industries, blockchain will have a huge impact. As stated, a single view is critical and being on a blockchain can provide that.

I’m a big fan of predictive analytics and the impact that can have on supply chain efficiency. The incredible advances being made in the AI space, and the related impact on predictive analytics is astounding. Having said that, there are several other technologies that come together to feed the requisite data into these systems, and cloud based interoperability will be the common denominator to all of them.

For the last 10 years I have been saying that inventory and supply chain visibility is the single biggest supply chain issue for retailers. Visibility is the enemy of low inventory/high availability. Data silos are the enemy of visibility. Visibility is foundational in that without it advanced planning, AI and machine learning are unlikely to deliver their potential. Investments that eliminate data silos to provide a consistent, real-time view of what is happening end-to-end are the single biggest benefit area for supply chain. This is not about “rip and replace” or adding in a new shiny AI driven supply chain planning solution (that may come later). This is about connecting the existing inventory and other supply chain data silos and leveraging in-memory caching technology to provide the realistic and real-time perspective. Delivering this requires universal connectivity that can rapidly and flexibly connect across different systems – irrespective of heritage, whether in the cloud or on-premises – in order to determine the real perspective. From there it can be deployed to where it is needed –… Read more »
3
|
0
-   Share

Supply chains will get even more complex driven by technology as outlined in today’s discussion. All the tools suggested are happening. Businesses and companies that innovate and take advantage of tools will be the leaders for the next decades.

Perhaps the most critical will be the sensors that can track each component from country to country on where the components are in the process and further, prepare the next step of the process to be ready for what is coming or adjusting for what is not.

Each element on the list has a vital role in shaping future supply chains and many – if adopted – could significantly change how logistics function today. But if I were forced to pick a few from the list, it would be AI, cloud computing, and blockchain technologies. That said, in order to optimize any of these technologies you need a suite including sensors, 3-D printing, etc. As to which are the least practical, I think that’s the wrong question. Many of these are actually directly related. Sensors for example have to be in place for the Industrial Internet of Things to work. Again, in a B2B setting, I’d say wearables might head the “nice to have” list unless you count things like Google Glasses. Interestingly, I also am bullish on B2B applications of augmented and virtual reality which didn’t make the list.

What retailers won’t say “I’d love to see more about my supply chain”? But I’m concerned that there’s a rush to execute many of these without considering whether they are really helpful.

There was a column in the past week in The Times (London) about Timpson’s and how when they buy shops, they disconnect the electronic tills and have stores do their totals by hand. They find tremendous reduced cost AND that the store managers understand their numbers, and their significance, far better.

We must stop believing that it is always good to automate. Automation quite often eliminates the opportunity for a human being to do something exceptional — entrenching mediocrity as a result.

Imagine you are driving and there is a big pothole on the road ahead, which can be potentially lethal. What do you need to navigate that safely? I would say managing supply chain disruption is something similar. Yes, you can say that fix the pothole, figure out a different route, etc., but what is the guarantee that you won’t face a different pothole?

What is needed is three things- good visibility reasonably far away, the ability to quickly sense danger, and the ability to respond and take appropriate action quickly. I would classify all the digital technologies under these three classifications and ensure they are put in place to navigate around any future disruption.

The supply chain design is at the heart of the ability to divert, adapt and succeed in real time.

Without the infrastructure to capture and analyze the data that describes the movement, location, and velocity of assets including inventory and transport assets, none of the other capabilities for supply chain management are possible.

I would put sensing and technology like the ability to build a digital twin to do what-iffing and scenario modeling to be very important.

The most beneficial tools are the ones that follow Lean Principles—creating more value, less waste. We see customers most excited about automation features that streamline processes, and don’t replace people but enhance their roles to enable them to focus on the most rewarding work (for both them and the company).

We’ll continue to see more robotics in warehouses (co-bots in particular that work alongside people), and more retailers looking for best-in-breed tools that drive automated processes.

Looking at the list of applications, none of these single handedly will cut the mustard with the fundamental supply chain design changes that are ahead. For anyone suggesting they will, either single-handedly, or in combination, they are part of the endemic problem of the paralysing “Amazon Effect,” or trying to sell an irrelevancy. If I was reading a glossy brochure from the 2010s with this list of applications, I would suggest we need significant disruption to occur to shift the needle on how agile thinking and execution needs to be adopted across businesses within the consumer driven ecosystem. These tools are merely an expression of a fixed paradigm of doing what we have been doing (sometimes well, but more than often, within retailing, rather poorly as we claim to be lean and optimised) for ages, even during the pandemic with a limited and single dimensional view of how supply chain network can be developed into highly flexible adaptive open systems of collaboration and natural transparency. The proof of a failure to comprehend supply chain as… Read more »
0
|
0
-   Share

Braintrust
"Investments that eliminate data silos to provide a consistent, real-time view of what is happening end-to-end are the single biggest benefit area for supply chain. "

"We’ll continue to see more robotics in warehouses (co-bots in particular that work alongside people), and more retailers looking for best-in-breed tools..."

"I would put sensing and technology like the ability to build a digital twin to do what-iffing and scenario modeling to be very important."