What can smart shelf tech do for Kroger’s business? 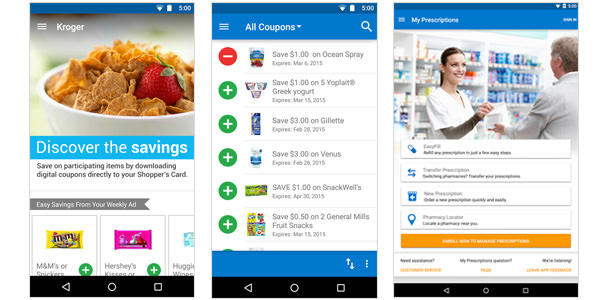 For many Americans, the name Kroger is synonymous with groceries and supermarkets. Those who follow Kroger closely know that the company continues to excel at its core business, in part, because of its innovative use of technology, which has helped to up performance across departments within the organization.

The most recent example of Kroger’s willingness to put technology to work includes a test of smart shelves that automate pricing and product information changes while promising to display nutritional information on demand in the future.

Kroger’s test of the technology has grown from a small number of shelves to 2,200 throughout the center store at a location in Ohio, according to The Cincinnati Enquirer.

Advancement in the shelf technology, along with Kroger’s mobile app, "has the potential to reinvent brick-and-mortar retailing," Brett Bonner, vice president of research and development at Kroger, told the paper.

One of the most immediate benefits of the smart shelves is that it reduces the amount of time spent on labor to replace price tags. That found time can be spent helping to serve customers.

A few highlights of Kroger’s tech focus in recent years include:

If fully adopted, what sorts of advantages might smart shelf tech give Kroger over the company’s competitors? How does Kroger’s use of technology compare to its peers within grocery and the broader retailing industry?

Please practice The RetailWire Golden Rule when submitting your comments.
Braintrust
"For me there were several telling comments in the Cincinnati Enquirer article. The first is that when one of the two customers interviewed for the article was asked about the tags, her comment was "This is the first time I’ve noticed them.""

"First, I have to be clear: most of this stuff is OLD technology, going back to at least 2001. At that time we heard that the unions were fighting tooth and nail against digital price tags and it became a major sticking point."

9 Comments on "What can smart shelf tech do for Kroger’s business?"

If the smart shelf tech reduces costs, then the benefits will be bottom-line for Kroger. This is not a competitive advantage per se, at least not to the shopper. A better app (not just a new app) may be useful, but again its benefits may be short-lived. Here in Atlanta, Publix already has a pretty good app. Kroger would be playing catch-up.

Not sure that this will be a great competitive advantage but time will tell. If it is then others will quickly adopt it. For me there were several telling comments in the Cincinnati Enquirer article.

The first is that when one of the two customers interviewed for the article was asked about the tags, her comment was “This is the first time I’ve noticed them.” This from a person who had shopped in the location for the past five years. The second was regarding the advertising being show in the cereal aisle, “some parents weren’t thrilled to have to pull their kids away from multiple performances.”

First, I have to be clear: most of this stuff is OLD technology, going back to at least 2001. At that time we heard that the unions were fighting tooth and nail against digital price tags and it became a major sticking point. Interaction with their app is painstakingly obvious. So when I hear phrases like “the potential to reinvent brick-and-mortar retailing” or the word “innovation,” I don’t know whether to laugh or feel remorse for the industry.

Sure, there are obvious benefits for Kroger until the industry catches up, assuming that they (like Apple does with new technology) educate their customers on how and why to use it. And as for the phrase “smart shelves,” there is a ton of intelligence and user experience left to be exploited in shelving/displays.

They are supposed to save many labor hours typically spent on re-tagging shelves, and they may support planogram compliance. The narrow, touch-sensitive screens will allow shoppers to check product information. They are also expected to deliver motion and still-image promotions—a potential source of revenue to Kroger.

This is In-Store Implementation innovation crossed with the Internet of Things—combining labor savings, planogram compliance, and in-store digital media in a single technological mashup. The key missing elements are shopper trackers and shelf sensors that would tell the replenishment system when it’s time to re-order.

Is this the future for supermarket merchandising systems? The devices can’t come cheap, and they will require skilled installers, periodic maintenance, continuous content management, and access to a power supply. To work effectively, Kroger will need to compile and maintain precise data about each store’s layout and shelving.

But they have potential to help illuminate the retail environment. This is an experiment worth watching.

I believe smart shelf tech like Kroger is implementing will soon be a game changer at brick-and-mortar retail. This will allow retailers to utilize dynamic pricing in stores that they already do online. Pricing can fluctuate easily between regions, neighborhoods and even the time of day. Similar to prices changing for different ecommerce shoppers, there could be a day where the digital prices change for a shopper as he/she passes the shelf with their Kroger app open. The industry built around ecommerce pricing intelligence will soon need to account digital pricing in the brick and mortar world. This will also create new challenges and opportunities for retailers and suppliers to track the competitive pricing landscape in stores.

One of the greatest, not immediately observed benefits here is yet another set of data points around consumer purchasing behavior, which can be optimized towards.

Furthermore, the implementation of smart shelves certainly adds to the larger notion that Kroger cares about its customers and satisfying consumer needs.

Kroger has managed to stay ahead within the grocery and food industry by implementing new technologies and, perhaps more importantly, understanding what tech will be most advantageous. Although obvious, it certainly seems like a good decision for Kroger to test smart shelves before rolling them out across a large number of stores. With the continuous advent of new technology, retailers must find what will work best in a particular situation.

Kroger and its Innovation Team is way ahead of any competitors leveraging in-store technology. Their stock has recently quadrupled in 4 years—much faster growth to the top line than any other grocer. Their customer service objectives and success have surpassed any competitor in the industry.

Smart shelf technology will give Kroger (or any other retailer) analytics that will help predict inventory needs, popularity of products and much more. It will help spot trends in products. It can be used to test price elasticity, and much more. Someone once said, “You can’t manage what you can’t measure.” This will add another level to measurement and analytics that we haven’t had before.

Electronic shelf tag technology has been around for some time and while it certainly can provide cost savings it is not what I’d consider to be revolutionary.

Kroger does have opportunity to leverage their new shelf edge display tech to transform the shopping experience, particularly being able to display shopper-specific promotions when the shopper is in front of the product or to highlight certain products that the shopper may be interested in.

Beacon technology, that is still nascent in supermarket retailing, can provide several of the benefits mentioned in the article such as reminding a shopper that they just passed by a product that is on their shopping list or that they have a coupon for.

We are seeing a steady increase of new innovation coming into the industry that is transforming the shopping experience both by providing retailers and brand manufacturers greater insights to shopper behavior and enabling new services and experiences in store for shoppers.

Braintrust
"For me there were several telling comments in the Cincinnati Enquirer article. The first is that when one of the two customers interviewed for the article was asked about the tags, her comment was "This is the first time I’ve noticed them.""

"First, I have to be clear: most of this stuff is OLD technology, going back to at least 2001. At that time we heard that the unions were fighting tooth and nail against digital price tags and it became a major sticking point."