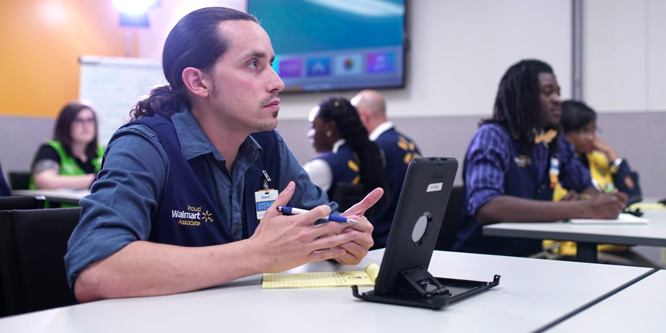 Walmart was at the center of two active shooter events last week in the U.S. Those incidents, one in El Paso, TX and the other in Southaven, MS, resulted in 25 deaths and dozens of people injured. As awful as the carnage was, Walmart says it could have been worse, particularly in Southaven, had it not been for active shooter training that the retailer requires all associates to go through.

In Southaven, a disgruntled former employee took the lives of two Walmart workers and a police officer. Store associates were able to direct customers to the proper exits and to safety as the confrontation took place.

Walmart puts all store employees through its active shooter training when they are hired and then four times a year on computers. As Reuters reports, Walmart began requiring quarterly training in 2017 after 58 people were murdered at a country music festival in Las Vegas and 26 others lost their lives to a gunman at a church in Sutherland Springs, TX.

The reality is that mass shootings have become part of the American way of life, and those carried out by domestic terrorists, most espousing white nationalist propaganda, are a concern to the FBI, according to recent testimony given to Congress by Christopher Wray, director of the agency.

So-called soft targets, such as retail stores and malls, are frequently picked by people with murderous intent in order to inflict the greatest harm possible.

“No retailer is immune to a violent act,” Randy Hargrove, a Walmart spokesperson, told The Associated Press. “That’s why we take training so seriously.”

Robert Moraca, vice president for loss prevention at the National Retail Federation, told the AP that most retailers have active shooter training programs in place.

Please practice The RetailWire Golden Rule when submitting your comments.
Braintrust
"It is sad that such training needs to be given, but Walmart is right to give it and to prepare staff for the worst. "

"If training can save one life, it is worth it. The aftermath is a whole different story."

"Prevention almost seems impossible. However, the support services, counseling, and empathy are critical if such a horrendous event happens."

Every mall in America should have this training quarterly as well as any business. You can’t pretend an active shooting event will not happen to someone or in someplace you don’t know.

It is sad that such training needs to be given, but Walmart is right to give it and to prepare staff for the worst. That said, I suspect nothing can truly prepare anyone – staff nor customers – for the aftermath and impact of such a terrible event. Counseling, compassion and understanding are the only things I can suggest Walmart can offer its staff in the aftermath of a shooting in-store.

Swell. I feel like I live in a Third World country now.

Imagine how the employees feel who know it’s happened at other of your store locations.

I can’t imagine any of it. The Uber Eats driver bringing food to my house last night was afraid to come on the property because he couldn’t see the address. He was afraid he’d get shot if he was in the wrong place. He was Latino. Can I imagine that? Nope.

That’s truly a sad reality, Paula. I guess people in his situation will need to text customers “I’m in front of your home with your food. Please don’t shoot!”

Sad, sad, sad. I am not sure what “prepare” means. It certainly doesn’t mean stop it. Focus on the aftermath. That is where the retailer can do the most good.

I went through active shooter training with a client about a month ago and it was a total eye-opener. Some of my takeaways:

Many of the participants in the training I went to had never heard a gun fire, let alone touched one. Their shock at the noise was clearly unnerving to them.

This is great info Ron. I would imagine having any kind of preparation or training would lend some order to an otherwise chaotic event and that, in itself, could save lives. When someone looks and acts like they know what to do, others do tend to move together better. For my 2 cents.

It’s a sad, sobering and depressing state of affairs. There is no need to overly politicize this, yet we live in a world where mass shootings in every public place are a possibility. Malls, places of worship, schools, concert venues, and places where people congregate, including Walmart, have become potential targets. We live in a world where bulletproof backpacks have shockingly become a back to school item.

The new and nightmarish norm requires every organization, including retailers, to reexamine their standard operating procedures. Prevention almost seems impossible. However, the support services, counseling, and empathy are critical if such a horrendous event happens.

Jeesh — this is what we’ve come to. If training can save one life, it is worth it. The aftermath is a whole different story. My daughter’s good friend was shot at the Yoga Studio shooting in Tallahassee, FL last fall – she is beyond messed up. Counseling is a must have offering for retailers that experience this type of event.

Most retailers see these events as something that happens to others, but not to them. I question Mr. Moraca’s statement that most retailers have active shooter training classes in place. That may be true for its 18,000 members but that is only a fraction of all the retail companies in the U.S.

As the article notes the retailers and locations that should be especially concerned and prepared are those where large number of people are likely to be present. I applaud Walmart for having a training program in place and for holding quarterly training sessions. I hope that the unfortunate recent events will get other retailers, malls, etc. to do the same.

What a sad thing that this is becoming more of the norm. I am not going in to my reasons for the increase. But the truth is we still believe it won’t happen where we are. Yes, it can. I applaud Walmart for taking the steps to train their employees. CNN interviewed a Walmart employee who ushered customers into safe areas possibly saving more lives. It is time for less rhetoric and more action by Congress to put some meaningful controls in place. Hopefully that will help. But I am not sure of it at this point.

Here’s a link to the Department of Homeland Security’s “active shooter” booklet.

This is one of the most important and disheartening topics of our age in the retail business. Of course Walmart and other retailers must provide “active shooter” training to employees. At very least the knowledge and awareness may help preserve some lives. Since there are more Walmart stores, employees and store visits than any other retailer, it’s statistically likely that these violent acts will happen more often on their premises than any other chain. Like it or not, that puts the company “in the cross-hairs” with respect to taking a lead on defining new safety practices. I wonder if Walmart — or other retail and mall operators — have considered creating “safe room” type spaces within their premises. How about adding reinforced walls and doors to back-room areas where staff and shoppers could shelter in place? What about a “panic button” app on their store-issued mobile devices to more rapidly inform authorities? I’m no security expert, but the example of the El Paso Walmart employee who shepherded dozens of shoppers to shelter within steel shipping… Read more »
1
|
0
-   Share

It’s unfortunate that in 2019 Americans are suffering from this absurdity and the racism that seemingly is the fuel for it. Since it’s our reality though, it’s obviously great that for the sake of customers and employees, Walmart is offering training that one day may save lives.

But the corporate hypocrisy has to be called out. They are a major gun seller and, although they seem to have better than average purchase requirements, any one of those guns may one day kill innocent shoppers. Why not remove the category from stores and send a strong message against gun violence instead of potentially profiting from it? Employees seem to agree and are staging a walkout this afternoon.

I noticed there is no evidence of calling for the police depatments to redeploy their resources away from speed traps and into the neighborhoods and commerce areas they are needed. These men and women have the necessary and ongoing training needed to deal with violence and hate crimes.

Criminal violence and crimes of passion need all of our attention now. Let us consider how to better utilize the means and now people we have in order to implement safer communities. We might also start recognizing that false accusations or innuendo are themselves a crime of passion and/or hate. Thus they are an integral part of the problem(s).

So borrowing from the fable of the frog in boiling water/heating water … are we cooked yet? (BTW, the frog fable is false … google it.)

Most retailers don’t plan for this crisis of this magnitude. However, training should be part of orientation with annual reminders — along with what to do if there’s a fire or any other crisis type incident.

When an event like this takes place, there is plenty of need for counseling. The company needs to step up and help employees get through the incident. Nobody can ever forget what happens. Some are more resilient to the post-traumatic stress. Not everyone will deal with this the same way.

Braintrust
"It is sad that such training needs to be given, but Walmart is right to give it and to prepare staff for the worst. "

"If training can save one life, it is worth it. The aftermath is a whole different story."

"Prevention almost seems impossible. However, the support services, counseling, and empathy are critical if such a horrendous event happens."