Walmart to end price matching in some stores, but not really 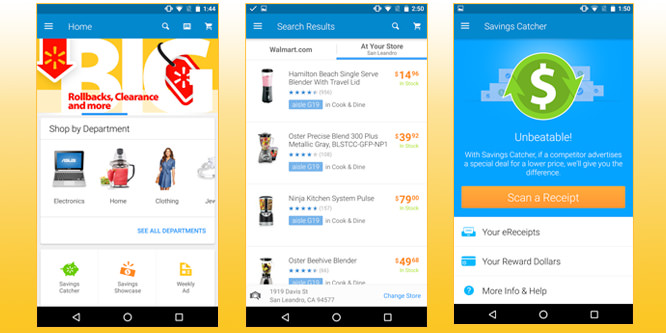 When Walmart announced it was going national with its Savings Catcher price match program in 2014, the move was widely seen as the chain’s attempt to solidify its low price leadership position, particularly related to dollar stores. In the roughly two years since that announcement, something has changed because Walmart has confirmed that it is ending Savings Catcher in 500 stores on June 9.

Until now, Savings Catcher has worked by allowing customers to receive the lower price at the checkout if they show a competitor’s ad on the same item. While it’s true that Walmart no longer plans to manually match competitors’ ad prices in its stores, the chain will continue to offer Savings Catcher on its mobile app. That version of the program automatically compares items purchased to competitive ads in the local market and gives customers a gift card for the difference.

For those customers in the affected stores who do not have Walmart’s mobile app, the chain is rolling back prices on thousands of items.

Please practice The RetailWire Golden Rule when submitting your comments.
Braintrust
"Walmart would be smart to ensure that shoppers who participate see meaningful savings. Walmart must message "We've got you covered.""

"Are shoppers who carry around competitors’ ads really the ones you want?"

"If you are not going to make it easy for the customer, don’t do it."

10 Comments on "Walmart to end price matching in some stores, but not really"

This is nothing but the continuation of Walmart’s confusing ad matching program. It has never been constant between stores, nor its employees. Customers have learned which cashiers or supervisors will truly ad match and those that don’t. Competitors will advertise saying the price is contingent on using a loyalty card. That was Walmart’s way to opt out. Unless of course you got an employee to override it. Generally Walmart has been good about taking competitors’ ads and then lowering their prices in the stores, so there would be no point in ad matching at the cash register. Large-ticket items are often slightly altered for Walmart so the “exact” item is not sold in any other store. In my opinion the ad match game is rigged and a waste of time.

Not sure it is a brilliant move, as Business Insider wants to label it. But having sat behind someone at a register while they contested prices on five items, I can understand wanting to move the process out of the checkout lanes. I wonder if this program really needs to be kept around.

Walmart knows how to play the game better than anybody but they have never matched any of my meat deals, as our customers have told me over the years. They pick and choose how they want to do this, and it is not truly a price match at all. Nonetheless the stores will be packed for the weekend and the money will continue to flow into their coffers.

From an administrative and efficiency standpoint, directing price matching through Walmart’s app makes nothing but sense.`Doing so speeds up the process and mitigates confusion, inconsistency and potential confrontations over matching criteria. That said, the switch puts Walmart completely in charge and turns price matches into a passive experience for shoppers. Walmart would be smart to ensure that shoppers who participate see meaningful savings. Walmart must message “We’ve got you covered.”

Walmart has long-positioned itself as a price-led retail option. Therefore, cloaking savings or making it difficult for shoppers to compare prices is a slippery slope. My advice is to keep it simple, keep it transparent, and make it part of the ongoing value proposition. Moving ad matching from the checkout to the aisles may prove more of a challenge than Walmart realizes. Time will certainly tell on this strategy.

I agree with Al McClain that “low, low prices” that are competitive is a solid approach if in-stock condition and service levels are always reliable and consistent.

A thought: What if Walmart got out ahead of negative feedback on this move by offering a new feature and benefit to the Walmart credit card? It would simply message that since Walmart rolls back its prices so often, now your credit card account would be auto-monitored and if Walmart dropped prices on any of your credit transactions within 30 days of shopping, they would auto-credit your account. They wouldn’t have to offer price match against competitors because they could promote this feature as one that reflects Walmart making many pricing changes continuously while monitoring competitors, so now, you the cardholder can benefit from the price changes without having to do anything.

Walmart has historically had a strong price image. Anything that makes price matching less transparent and more difficult in the mind of the consumer isn’t a positive in reinforcing that price image. While this may make cashiers more productive, this may not translate to strengthening a “low, low prices” image.

My husband and I take advantage of the Savings Catcher program.
We’ve saved a ton of money and I’m grateful. However, we have have met in our local store older folks who are not tech savvy and do not have smartphones. They have relied on the matching
for savings and rather than running around town trying to find the best prices,they have depended on one-stop shopping at Walmart to save their dimes.

I personally am very disappointed in the push for using the app only. It is not all-inclusive.

Braintrust
"Walmart would be smart to ensure that shoppers who participate see meaningful savings. Walmart must message "We've got you covered.""

"Are shoppers who carry around competitors’ ads really the ones you want?"

"If you are not going to make it easy for the customer, don’t do it."