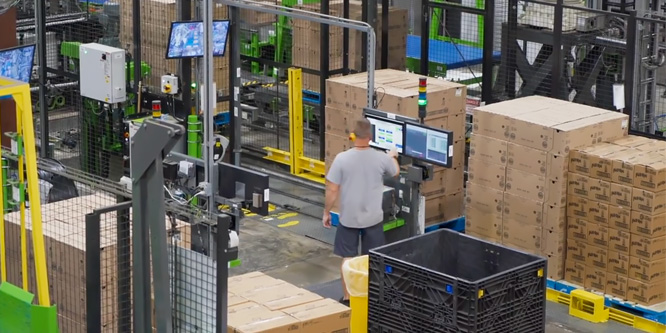 Walmart announced earlier this week that it is adding robots to its regional distributions centers that sort, store, retrieve and pack freight onto pallets. The initiative is designed to move products from DCs to stores with a greater degree of accuracy and speed than ever before.

The retailer, which began testing the technology from Symbotic in 2017, is deploying the robots in 25 of its 42 regional warehouses across the country.

Joe Metzger, executive vice president of supply chain operations at Walmart U.S. wrote in a company blog that, until now, the retailer’s system was to cross-dock or warehouse product that arrived at DCs until it was needed in stores. This process was handled manually by warehouse personnel. When stores were ready for the merchandise, DC workers would have to figure out how to efficiently pack a 53-foot trailer, which would be manually unloaded when arriving at a store.

The new system uses “first-of-its-kind tech” that works off “a complex algorithm to store cases like puzzle pieces using high-speed mobile bots — operating with a precision that speeds the intake process and increases the accuracy of freight being stored for future orders. By using dense modular storage, it also expands building capacity. And by using high-speed palletizing robotics to organize and optimize freight, it creates custom store- and aisle-ready pallets, which take the guesswork out of unloading trucks.”

Mr. Metzer wrote that the new system is nothing short of “a game changer” for Walmart.

The retailer says that the use of automation may change some of the jobs that workers perform in its warehouses, but there are benefits attached to that.

“Along with saving time, limiting out-of-stocks and increasing the speed of stocking and unloading, we’ll also have the chance to train associates on how to use the new equipment, creating new skills and preparing them for jobs in the future,” Mr. Metzger wrote. “And because the technology decreases the need for our associates to handle freight, it removes one of the toughest aspects of supply chain work in material handling.”

DISCUSSION QUESTIONS: What do you think Joe Metzger means when he calls the robotics being deployed at Walmart’s regional distribution centers “a game changer” for the retailer? What will this supply chain development mean for store operations at Walmart and for those companies competing with it?

Please practice The RetailWire Golden Rule when submitting your comments.
Braintrust
"Given its scale, Walmart will potentially raise the associate skill bar across retail to the ultimate benefit of its competitors."

This is a great use case for robotics. Supply chain efficiency is a key differentiator and Walmart’s strategy to use robots to increase the speed of loading and unloading trucks at distribution centers could be “a game changer.” Distribution centers and stores with large inventory storage are prime opportunities to leverage robotics to improve the efficiency of repetitive tasks and it also helps avoid employee injuries.

This technology means another piece of the distribution puzzle is more efficient, making for a speedier and more strategic warehouse-to-store process. Consumers have faced too many stockouts throughout the pandemic, so it is encouraging that this technology can minimize that frustration. However there are other elements of the logistical equation that will need to be in order for this to truly be a game changer. Since this is algorithm based, the inputs to the algorithm must be extremely accurate and match real-time demand as closely as possible. I look forward to seeing data on how this improves stockout and markdown metrics. Also, how will returned items factor into this system?

As David said, this is a great use of robotics. Keep associates working with people or in higher level jobs.

The use of robotics to perform repetitive tasks that require accuracy speeds up at least two tasks in the process: stacking the pallets and unloading a truck at the store, the latter being as or more critical than the former. Also note that this is not an off-the-shelf solution; the robots were designed with and for Walmart.

This is just GREAT for Walmart! It’s Tetris with robots handling the configurations. With Walmart leading the way, other retailers and 3PLs will watch for success and impact on the bottom line. Then we will see this deployed to all levels of retailers which, in turn, strengthens both the brick-and-mortar and e-commerce experience for the consumer.

Bezos is reading this in space thinking, “yeah, I know.”

It was only a matter of time before Walmart jumped on the robotics wave, and it looks like it has taken a thoughtful approach to getting it right. The “new skills” piece jumped out at me as it signals a massive retraining effort that will set a new standard across retail. Given its scale, Walmart will potentially raise the associate skill bar across retail to the ultimate benefit of its competitors. It will also allow Walmart to compete head-to-head with Amazon for retail talent. As is usually the case with Walmart, this is one move with enumerable benefits.

Like it or not, robotics will increase the advantage gap dramatically for Walmart and the other major players. Humans are no match for the spatial planning for loading trucks that they’re using here. The real game changer that I see here is micro-fulfillment centers (MFCs). John Lert left Symbotic Systems, the Walmart vendor mentioned above, to start Alert Innovation also used by Walmart for MFCs. John is the real deal, an MIT bred genius who will revolutionize the store with robotic pick, pack, and pickup or delivery.

As George notes, some warehouse workers’ roles will shift from managing products to managing tech. It mirrors the shift in grocery stores as former cashiers now assist shoppers with self-checkout. Robots symbolize how retail and tech are now unmistakably entwined.

Walmart’s investment in robots will help it in two labor intensive areas – its DCs and its delivery process. There is a severe commercial driver shortage in the U.S. and making deliveries more efficient may allow Walmart drivers to handle more in the same timeframe.

It is a game-changer for them even in a literal sense, because the warehouse workers were playing a human game of Tetris while moving and storing products in their DC or while loading up a truck to meet the store demand. By automating that process smartly, they could win more games by packing more products into their DCs, into their trucks while minimizing material handling.

This must be part of their $14B supply chain transformation and is a great idea to improve efficiency and responsiveness. If it’s not so much a game changer, it certainly will improve competitive position relative to Amazon who has since 2012 been using robots like this and has 350,000 of them today.

What will this supply chain development mean for store operations at Walmart and for those companies competing with it?

You may have seen the recent Sam’s Club test of “scan in store and ship to home” test news. Versus Amazon, robotics in the distro centers should help Walmart deliver a super-efficient buy anywhere/anytime model. So whether you shop in store or buy online and have product shipped or pick up in store, product availability is almost guaranteed.

For competitors, the theme is automation and scaling with as much intelligence as possible the processes connecting demand to supply.

No kidding and surprisingly, is it really true that Walmart is this far behind embracing AI and Robotics in DC automation. Say it isn’t so! Amazon, Kroger, Target and others have serious head starts recognizing the business value months, even years ago.

Braintrust
"Given its scale, Walmart will potentially raise the associate skill bar across retail to the ultimate benefit of its competitors."