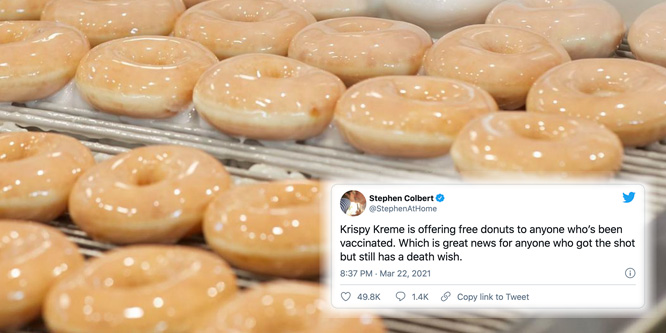 Krispy Kreme’s announcement last month of a promotion offering a free glazed doughnut, available through the end of the year, to anyone receiving a COVID-19 vaccine was not viewed as a positive in some circles.

Dietitians, doctors and others pointed out that regular consumption of sweet, nutritionally deficient treats like doughnuts is directly tied to the nation’s obesity epidemic and associated ills. Others saw it as trivializing the serious nature of the pandemic that has taken over half-a-million lives in the U.S. since last year. Still others didn’t see much upside, looking at the issue from a purely business perspective.

Krispy Kreme, for its part, maintained that its show of “sweet support” for those protecting themselves and others from spreading the virus was meant as a simple gesture of thanks to its customers. No doubt, the chain expected extra traffic into its shops and add-on sales as a result of the promotion. The reluctance of some to receive the vaccine and the disinformation spread about it could just as well have backfired against the doughnut chain, however, if it was seen as taking a side in what most see as a public health issue but others view as a political matter.

Whether the promotion has moved the sales needle for Krispy Kreme is not publicly known at this point. It’s also a response that may not be fully quantifiable as vaccinations and the lifting of social distancing restrictions are no doubt contributing to greater traffic at the chain’s shops, even without the giveaway.

New research from Morning Consult doesn’t speak specifically to Krispy Kreme’s case, but it does suggest there is little downside for companies offering free products to Americans who have gotten vaccinated against COVID-19.

Forty-one percent of consumers surveyed said that they would feel more favorable toward a brand offering vaccine incentives. Forty-two percent said it would not affect their thinking one way or the other.

Nearly six in 10 Americans in the survey thought that offering rewards for vaccinations was a good way to encourage people to get them. Forty-four percent thought not.

A key finding is that 73 percent of those receiving the vaccine said they would likely take advantage of these promotional offers if they came from a local retailer. Men, Millennials and those identifying as Democrats were most likely to view these promotions favorably. Boomers, independents and Republicans felt differently.

DISCUSSION QUESTIONS: Where do you come down on the business case for retailers offering promotional rewards to people getting COVID-19 vaccines? Does the Morning Consult research tell you that it’s safe to get behind such programs, or are they to be avoided?

Please practice The RetailWire Golden Rule when submitting your comments.
Braintrust
"If it gets people out to get vaccinated what’s the big deal about a donut? "

"This bothers me in so many ways. It is taking something deadly serious and turning it into a donut."

"Anything that moves us closer to herd immunity should not be dismissed out of hand. Krispy Kreme should be heralded not derided."

16 Comments on "Vaccinated Americans like getting retail thank you freebies"

There are tech solutions to take the guesswork out of connecting generic data to in-store hard data received in real-time.

The data from Morning Consult, and it’s the same for any other data intelligence, are generic. And so through some hoops and assumptions a retailer can surmise how it relates to their own in-store activity. However an in-store immediate feedback survey, such as TruRating, takes the guesswork out. Stores can create their own questions and the customer answers just one while they are waiting for the product to be bagged. So get the vax, get the donut, answer the question, repeat.

If offering a freebie persuades people to get vaccinated then it’s no bad thing. I don’t believe that such offers trivialize the significance of the pandemic; honestly, that’s just the misery brigade trying to create issues where none exist. As for donuts being unhealthy: yeah, they are if not eaten in moderation as part of a balanced diet. It’s the responsibility of the individual to manage their consumption of foods.

This bothers me in so many ways. It is taking something deadly serious and turning it into a donut. And I can’t imagine those who have sworn off the vaccine being convinced by any in-store promotion. I wonder if those retailers would also be monitoring social distancing?

Maybe I am all wrong and in-store promotions would send someone who previously said no to get the vaccine. If so, that is a statement on our society that is embarrassing.

If it gets people out to get vaccinated what’s the big deal about a donut? The businesses get a lift from more customers in their store, and the customer gets a treat for taking care of their health.

The downside risks appear to be few in support of vaccination, so why not offer an incentive that will drive traffic? At this stage of the pandemic we can all use a little bit of a treat, so even if you’re not a donut fan it might get you into a Krispy Kreme store.

It is a smart move by retailers, especially if they can provide something tangible beyond a typical promotion and bring new customers in the door. One of my favorite promotions that is less well known than the Krispy Kreme promotion is the Staples program to laminate your vaccine card for free. This is a great promotion because it provides pandemic-related services and also introduces customers to print and marketing services. In general, retailers trying new marketing ideas should consult internally with various age groups, genders, and their diverse workforce to ensure that it will resonate and be true to the brand and not have a potential negative impact. Creative COVID-19 related marketing ideas are no exception to this rule.

Although it’s a marketing ploy and blatant attempt to entice people back into brick-and-mortar, it’s also a lighthearted way to connect with customers in a shared glimpse of light at the end of the tunnel. “See, we’re going to get through this, here’s a donut.”

We need to stop politicizing every action that may affect the critical objective of getting people vaccinated. Anything that moves us closer to herd immunity should not be dismissed out of hand. Krispy Kreme should be heralded not derided.

If receiving a reward or bonus from a retailer encourages those who are on the fence about getting vaccinated to make the decision to get one, then more power to them! I am not sure this sort of promotion is enough to convince anyone on the fence, but if it convinces a small number of the population who otherwise would not get vaccinated then we are all winners as a result.

Free is part of marketing 101- this is just latching on to current day events. We’ve had free samples with and without special events for as long as I can remember and any attention driving initiative, well designed, will add to potential product sales and further brand awareness. Just attend any conference and the amount of free swag is unusually high. The general public will know it for what it is and they’ll make the call on whether they want the token items being offered. Even our government gave out free pins, “I got vaccinated.”

Face it – people like free stuff, especially tasty treats! Krispy Kreme is known for supplying promotional product to the public for various causes, so offering people a sweet gift after their jab seems like a good deal all around.

To all of those who are warning me not to go to Krispy Kreme to get a free free donut, thank you. I and millions of others probably didn’t know that it is not the most healthy snack to have. Now taking my tongue out of my cheek; Krispy Kreme has always given me, and my fellow donut purchasers, a free donut when we have to stand in line. But to the point, I see no harm in this free donut program. I think it is an extremely smart positioning act that customers will remember favorably. And it is probably attracting new fans. Welcome to the world of business!

Free has always been a great motivation for consumers to take action. For many their mantra was and still is, “if it’s free, it’s for me.” In this case the action taken is beneficial to the consumer and has long term benefits for Krispy Kreme in getting people comfortable in being back in their and other’s locations I believe if you are going to offer something as an incentive, it has to be something people want. Krispy Kreme did just that.

Look at this as not only a reward for getting vaccinated but also a way to build traffic and increase your business. For example, if you were a restaurant and you offered a free dessert or appetizer for having gotten the vaccine shot, you would be rewarding your customers but also building traffic.

Restaurants and QSRs were the most impacted by COVID and also will benefit the most when people vaccinate. When they incentivize people for vaccination, they are benefitting in many ways, ranging from garnering goodwill and publicity to getting traffic back in their stores. I don’t have a sweet tooth, so I might not even take advantage of this incentive, but one thing is for sure — I will remember Krispy Kreme for their generous offer for some time to come.

Braintrust
"If it gets people out to get vaccinated what’s the big deal about a donut? "

"This bothers me in so many ways. It is taking something deadly serious and turning it into a donut."

"Anything that moves us closer to herd immunity should not be dismissed out of hand. Krispy Kreme should be heralded not derided."