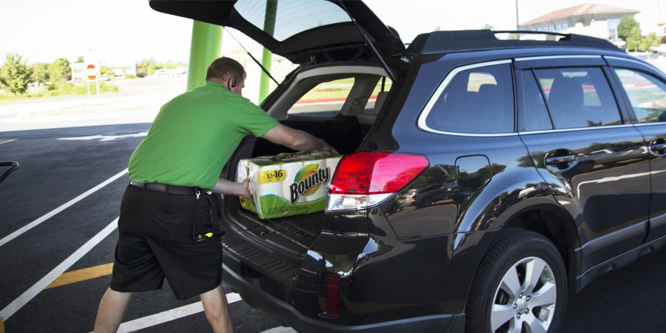 Walmart’s groceries won’t be getting rides from Uber or Lyft anymore. The retailer has ended its relationship with the two companies after using them to deliver online grocery orders failed to catch on with consumers, according to Reuters.

The decision to end the deal with Uber seems abrupt. The partnership between the two companies, which began in 2016, appeared on strong footing as recently as March when Walmart announced it was expanding grocery home delivery of online orders to more than 40 percent of the country.

At the time, Tom Ward, vice president, digital operations, Walmart U.S., said, “Ninety percent of Americans live within 10 miles of a Walmart store, and we serve more than 150 million customers a week, which gives us a unique opportunity to make every day a little easier for busy families. Today, we’re expanding this promise by helping even more customers save time and money without leaving their homes.”

The retailer appears to be maintaining its commitment to online grocery, which includes both delivery and store pickup options. Walmart has put more emphasis on store pickup, which reduces costs and offers the opportunity for add-on sales. The chain is looking to have pickup available at more than 2,200 stores by the end of next year.

Walmart uses its own personal shoppers, who go through a three-week training program, to pick customer orders. Delivery is handled by outside providers, which will soon no longer include the two ride-sharing services.

For now, it appears as though Walmart will lean on other delivery partners to meet the needs of its customers. Molly Blakeman, a spokesperson for Walmart, told Reuters that the retailer’s ability to deliver grocery orders will not be affected as it transitions from using Uber and Lyft to other partners including Deliv, DoorDash and Postmates, which have experience delivering food.

Walmart CEO Doug McMillon has identified the importance of the chain’s online grocery shoppers, who spend nearly twice that of customers who shop only in its stores.

DISCUSSION QUESTIONS: Are you surprised by Walmart’s decision to stop using Uber and Lyft to make grocery deliveries? How do you see Walmart’s home grocery delivery operation evolving in the future? Is it wise to use third-party delivery services rather than bringing the entire operation in-house?

Please practice The RetailWire Golden Rule when submitting your comments.
Braintrust
"Walmart would do better to brand its home delivery service, rather than live under sometimes shady and largely uncontrolled brand images..."

"...so far this year 100+ Uber drivers have been accused of rape. And I am supposed to let one in my home to drop off my grocery order?"

"The decision appears to be less a matter of Walmart making a call and moreso about closing the PR loop following Uber’s decision to sunset Rush."

Home delivery is not an option for Walmart to offer. It’s now a customer expectation, and Walmart knows that. After all, its direct competitors are offering delivery. In the era of convenience, Walmart must be, at least, as convenient as its competition.

Does the customer care if Walmart uses Lyft, Uber or any other delivery service? No! What they do care about is a service that meets expectations.

While I can’t speak to Walmart’s decision to use outside/third-party delivery services versus an in-house operation, I can assure you that Walmart is looking at every option. They didn’t become this successful by not understanding what their customers want, need and expect.

If the service isn’t catching on with consumers, then I am not surprised Walmart discontinued the partnerships. One other possible reason for the shift could be to partner with companies that are better prepared to handle food — especially perishables. Finally, while their higher priority right now is encouraging in-store pickup of online orders, I am guessing Walmart is aggressively working to find the right delivery strategy and partners before that part of the business begins to really expand.

A maturing business model will always be subject to review and change. Using a third party at the outset does not seem that surprising and then as the size of the business grows for it to then be reviewed again is not a surprise.

This does not signal an end to Walmart’s home delivery ambitions. Rather it signals a desire to do more fulfilment in-house, where Walmart has much greater control. Given the scale of Walmart, this makes perfect sense. That said, no matter who delivers it, the profitability of home grocery orders still leaves a lot to be desired!

This seems to be a service sourcing issue more than anything else. Many drivers operate under multiple banners (Uber, Lyft, etc.) and it seems opportune for Walmart to benefit from local driver organizations while building its own extended labour force. This reduces their service vulnerability should relations between an Uber-type service and its drivers become strained.

Having your purchase arrive by any guy in his car doesn’t instill a lot of confidence. I would expect outside services that can easily be seen as professionals is the only way to go for a big brand.

I am with you 100 percent here, Bob. Letting “any guy in his car” into your home to deliver groceries isn’t a smart move.

When I first read George’s article, I thought Walmart might be jumping the gun. Then your comment “any guy in his car” struck me as hitting a strong cord. But the others in this relatively new cottage type industry are not much more than “any guy in his car.” As this cottage industry grows, controls should be put in place to make us feel comfortable both getting in the car and letting “any guy in his car” in our homes.

I understand that the home is the last private refuge, but how is there any more concern for letting “any guy in his car” drop off a delivery at your house (like every delivery service) than there is for the business model of people willingly getting into said “any guys” car and letting him drive you where you want to go?

If there was concern on the vetting process, Walmart could have easily put into place a “Walmart Delivery Certified” program or background check that Uber and Lyft drivers needed to pass.

I think this move was solely a financial one.

Whether it’s wise to bring in-house or not is a financial decision, not a smart/dumb business move. Walmart needs to have home delivery of groceries if they want to play in that still relatively small space. If they have a cheaper way to do it that works as well as Uber or Lyft, more power to them.

One under-reported facet of grocery/restaurant delivery and other “alternative” use cases for Uber (and Lyft) is that the economics are worse for drivers compared to typical fares.

I don’t have insight into whether perhaps Walmart’s partners were struggling to provide prompt service at scale via a network of independent contractors, but it’s a possibility.

The mindset of Walmart has changed dramatically over the past five years. Similar to many traditional retailers, Walmart of the past was chasing the customer, desperately trying to meet expectations. Walmart of now has been nimble and innovative which translates into being ahead of the customer. Pioneers who lead may introduce concepts that take more time for customer to adapt to, especially if the initiative is outside the core competency of the brand. This is the case for fresh food delivery from Walmart. There should patience on the part of Walmart to allow their customer to catch up to them and comfort in knowing they may be finally ahead of the customer.

Shep is right, home delivery is not an option now. I do think it interesting that I remember reading that when Uber joined in with Walmart on this program, they made a statement that it was going to be an experiment, a learning process. I am not sure of the lessons either party has learned that lead to the split. I do believe that a grocery delivery service is more demanding and complicated that it appears to most, and that those companies who specialize and are proficient in delivering perishables, etc., have positioned themselves to be incorporated for this demanding service. That being said, it will be told that Walmart is making a better move for their customers with a dedicated, experienced and professional grocery delivery service.

Not surprised by the elimination of the passenger-focused delivery options. Transporting passengers is one thing, groceries another. However, despite Walmart’s investment and desire for the click & collect option to the final mile, some customers still desire home delivery.

I see Walmart, like Amazon, continuing to test various options. In fact, I believe the current relationships with Deliv, DoorDash and Postmates, which have experience delivering food, will continue. Each of these focused delivery services provide additional insight into the process should Walmart decide to build its own option or acquire one or more of the options it is currently using. In the end, this could be similar to Walmart’s acquisition of Jet.com, purchased for its talents and insights into an area in which Walmart had limited experience.

Walmart would do better to brand its home delivery service, rather than live under the sometimes shady and largely uncontrolled brand images of Lyft and Uber. Shoppers need to have trust in the fact that Walmart knows and cares about who is showing up on their doorsteps.

I know that there are many trustworthy Uber drivers out there, but so far this year 100+ Uber drivers have been accused of rape. And I am supposed to let one in my home to drop off my grocery order? It’s easy to see why Walmart would want no part of that conversation.

Personal shoppers at Walmart go through a 3-week training program to ensure that they choose the perfect fruits, vegetables, meats, etc., so choosing partners who screen and train drivers on how to properly deliver food just makes sense. There is a lot at stake for the retailer.

I agree with Bob Phibbs here. Having my grocery order delivered by someone who has just pulled up in their personal car just doesn’t feel right.

The decision appears to be less a matter of Walmart making a call and moreso about closing the PR loop following Uber’s decision to sunset Rush.

If Walmart wants to stay in the top echelon of grocery sellers in the US, they’ll need full home delivery — and not just in urban centers, either. Nailing delivery logistics outside of urban centers seems to be the exposure point for DoorDash, Postmates, Deliv, etc. right now. Though, I’d be very surprised if no one starts to figure out that space in the next year or so (and expect to see investment activity, partnerships, etc. imminently to get there).

Having to rely on the availability of a driver and having to rely upon that person’s presence as an extension of Walmart’s image could be problematic. One of the hallmarks of a good experiment is knowing when it did not work. Walmart, however, still needs to find a solution to household delivery. More experimentation is in order.

Braintrust
"Walmart would do better to brand its home delivery service, rather than live under sometimes shady and largely uncontrolled brand images..."

"...so far this year 100+ Uber drivers have been accused of rape. And I am supposed to let one in my home to drop off my grocery order?"

"The decision appears to be less a matter of Walmart making a call and moreso about closing the PR loop following Uber’s decision to sunset Rush."