Uber Eats delivers dinner with a side of blush 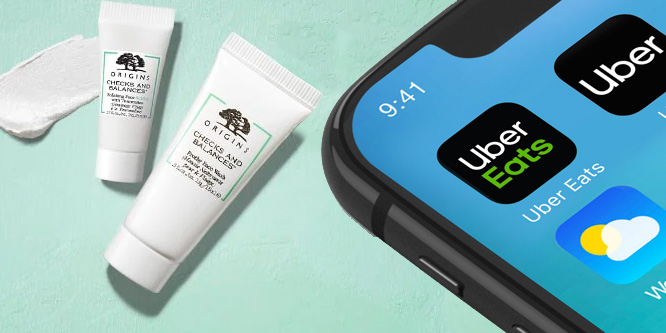 People ordering restaurant meals from Uber Eats might find makeup on the menu in some markets thanks to a new deal between the rideshare delivery service and Estée Lauder.

Uber Eats is making products from Estée Lauder sub-brands Origins and Jo Malone London available when ordering from 60 U.S. store locations, according to an article on Happi. The items from the two brands, the first beauty products made available through Uber Eats, are also being offered through Uber-owned delivery service Postmates.

Uber Eats has previously cut other deals to deliver CPG and non-food items, partnering to enhance its delivery of what it calls “home essentials.” Earlier in May, Uber Eats and delivery start-up Gopuff announced a partnership to fulfill orders of products like toothpaste, over-the-counter medicine and other food and non-food convenience store fare, CNBC reported.

Both Uber Eats and Gopuff are backed by Japanese venture capital firm SoftBank. Gopuff holds its own inventory in micro-fulfillment centers. Those who order convenience items as well as meals from Uber Eats at the same time will have each side of their order fulfilled by a different driver. All orders will, however, be managed through the Uber Eats app.

Previous to the Estée Lauder/Uber Eats deal, Postmates already had a variety of skincare and makeup brands available through its platform, including M.A.C Cosmetics, which the service began delivering late last year, according to Forbes. M.A.C. Cosmetics is owned by Estée Lauder.

A recent post on the blog Ridesharing Driver tells of drivers working for Postmates being pushed to sign up through the Uber Eats app rather than the Postmates Fleet app to continue delivering to customers.

In July, around the time of the announcement of Uber’s acquisition of Postmates, Uber CEO Dara Khosrowshahi characterized Uber Eats and all of its restaurant delivery competitors as being interested in moving into adjacent categories.

DISCUSSION QUESTIONS: Do you see customers purchasing beauty products through Uber Eats or is the Uber Eats market too different from the Estee Lauder market? Does the move say anything to you about the viability of the restaurant delivery model?

Please practice The RetailWire Golden Rule when submitting your comments.
Braintrust
"Why not? In today’s environment offering new and creative ways to deliver products to customers is critical, whether it will be viable long-term is the concern."

"With just one cosmetics retailer on the menu, it’s too hyper-specific for Estee Lauder to really catch on through Uber Eats."

"It feels like the Uber Eats team is just throwing darts at a wall to see what sticks. If they aren’t losing money on the attempt, go for it..."

Where is the appeal to the customer? Just because Uber has a huge fleet of delivery vehicles does not mean that these two categories would be ordered together.

Uber is in a super-app category, blending ride-hailing, restaurant delivery, and now regular retail categories. We should expect it to enter multiple categories – perhaps concert tickets, movie tickets, and events, which will converge with rides, dining, last-minute gifts, and event tickets – all in a seamless experience.

Why not? In today’s environment offering new and creative ways to deliver products to customers is critical, whether it will be viable long-term is the concern.

I mean, I get the idea of including “adjacent categories” on the Uber Eats menu, but I am not convinced makeup is adjacent to a double-double with fries. I am assuming there is enough target market overlap between the Uber Eats customer and the Origins/Jo Malone London customer to make this worth trying, but I am not yet convinced that people think of buying makeup at the same time they’re deciding whether or not to hold the onions.

I’m with you, Dave. I don’t really want my face moisturizer arriving with a side of baked ziti. 🙂

Good to know you feel this way, too, DeAnn! I’m afraid I am not in the target market for either, so I was treading lightly with my opinions!

That was my point. We agree. On the other hand, delivering legal marijuana with one’s meal is what I call “adjacent categories”: get the munchies, then eat!

Uber Eats and Doordash and Instacart are all racing to capture the “convenience now” market in e-commerce. I would say Instacart has the advantage here because they have the best advertising platform of the three, which means higher margins and more investment opportunities.

The challenge is make sure the “what” you offer convenience on matters. Do people need blush now? Perhaps. If Walgreens and CVS and Rite Aid are already on the other platforms, are people going to come to Uber Eats for a single brand?

I can get (no not for me) an Origins product on Amazon tomorrow. No delivery fee.

Love your comment Rick. Beauty shoppers are more dialed in to the shopping experience than other sectors. How they buy is almost as important as what they buy. There is a reason why beauty products aren’t typically sold in convenience stores. 7-Eleven is trying it with their Simply Me beauty line, but they are investing significantly in store design and geographical personalization to make it work.

It feels like the Uber Eats team is just throwing darts at a wall to see what sticks. If they aren’t losing money on the attempt, go for it, but I don’t think the majority of its customers will see the appeal. I usually want my food ASAP, and any incremental time spent picking up other supplies just increases the likelihood of me getting hangry (and nobody wants that!) If the supplies are already in the drivers automobile, that greatly limits what they can offer the customer and doesn’t really scale to challenge the realm of Amazon and other home delivery. Meanwhile, I can’t wait until Amazon starts delivering food…

While it may appeal to some consumers, the actual administration and delivery are two separate entities connected (right now) as a brand. Expect Uber to continue to try to grow into an anti-Amazon delivery behemoth.

I see this potentially appealing to shoppers who are already familiar with a product and just want to restock something quickly, but otherwise I’m not sure what the goal is here. If you are ordering a restaurant meal for a family or group, you likely don’t want your beauty product added to the mix. Gopuff has had some success partnering with local restaurants like Cheesecake Factory, but that’s for delivery of other convenience store products. There is such a thing as too much convenience. The delivery companies are likely the only ones who are going to profit from this.

At the end of the day, it is still a delivery vehicle for product. I see more extension of product lines for them. I believe Gruhub now delivers hardware as well as food. Hammers and hamburgers – why not?

There is a certain urgency to meal delivery. Ladies — does that exist for cosmetics?

This collaboration is probably not as much about cosmetics as it is about measuring the elasticity of Uber’s marketing capability. Their subsidiary in the Middle East (Careem) has been playing with the super app business model for some time. People who have observed how OTAs evolved over the past 20 years, how FinTech digital banks are evolving compared to traditional financial service providers, etc. anticipate that consumers will ultimately adopt one or two primary portals (apps/websites) through which they do 60 percent to 80 percent of their shopping. The operators of such marketplaces will command enormous influence over consumers AND brands in the future. Mobility operators are in a great position to win customer attention because people need mobility two to 10 times every day (and that frequency is much higher than the supermarket or other retail channels). Even self-driving car developers are eyeing the opportunity to command eyeballs during short trips and commutes to let customers take care of other needs during this captive period of time.

Marketers get permission to make a product from management. Permission to sell a product comes from potential customers. Just because you can deliver beauty products with a meal does not necessarily mean it is something you should do.

Uber Eats is hurdling forward to a rebrand. It was cute when Uber deliver Christmas trees, but Jo Malone long-term isn’t looking for adjacency to restaurant delivery. “Uber” can be a pre-amble to most anything. Personally, I would be excited to see them rebrand to something like “Uberfast.” When is my makeup arriving? “Uberfast.”

With just one cosmetics retailer on the menu, it’s too hyper-specific for Estee Lauder to really catch on through Uber Eats. It’s a fun little side perk, sure, but they’ll have to sign on quite a few more cosmetics brands for it to become a real destination.

It also bears saying that Estee Lauder still isn’t cruelty-free. While they have a following with more mature consumers, the brand won’t be able to catch on with next-gens until they become so. Until then, sustainably-minded consumers will keep going to Clarins, Hourglass, or other –– more ethical –– cosmetics companies.

Why be a holdout when it comes to animal cruelty? Purpose-driven business and B-corps lead the way in the Post-COVID retail landscape.

Adjacent categories? Sure, but that’s not the real point here. Look at this as an experiment to see how consumers will react to using Uber (Eats) as a destination for ordering anything they need to be delivered NOW. It’s the start of making Uber be the next mega-app platform for all your immediate delivery needs (alongside Instacart, GoPuff, DoorDash, and others!).

Braintrust
"Why not? In today’s environment offering new and creative ways to deliver products to customers is critical, whether it will be viable long-term is the concern."

"With just one cosmetics retailer on the menu, it’s too hyper-specific for Estee Lauder to really catch on through Uber Eats."

"It feels like the Uber Eats team is just throwing darts at a wall to see what sticks. If they aren’t losing money on the attempt, go for it..."