The retail apocalypse didn’t happen last year, despite the coverage 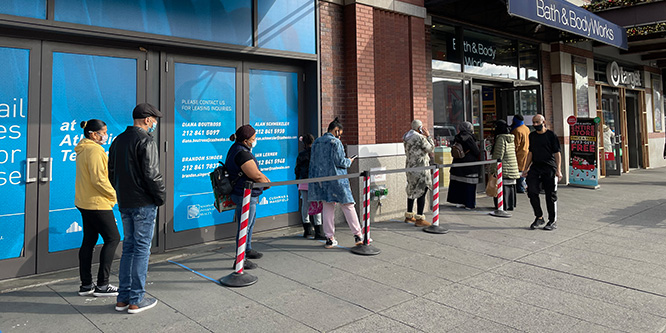 If there was a retailing equivalent of a swear jar (put in a dollar for every curse word) then it should be used for the phrase “retail apocalypse.” (Dang, there goes a George.)

As a recent article written by Bob Phibbs, AKA the Retail Doctor and a RetailWire Braintrust panelist points out, the offending phrase was never accurate and it still isn’t after almost a year during which U.S. retailers had to deal with the effects of the novel coronavirus pandemic.

The article contends that much of the financial and trade media went into Chicken Little coverage mode early in the pandemic. An early forecast by Coresight Research estimated that up to 25,000 stores would permanently close due to the pandemic.

Coresight’s forecast, it turns out, was vastly overstated, which means the worst year ever predicted for retail never happened. An article last month by Deborah Weinswig, founder and CEO of Coresight, acknowledged the estimate “based on our analysts’ experience in tracking store closures and our substantial historical data sets” was wrong.

The reality, according to Coresight, was that 8,721 stores were permanently shuttered in 2020, fewer than the 9,832 that closed in 2019. That’s not to discount the large number of stores that closed last year but only to point out that many of those were on shaky ground before the pandemic.

Mr. Phibbs cites dozens of statistical sources for how one piece of content shaped the narrative about the death of retail and supporting his belief that 2021 will be a better year for retailing than the one that just passed.

Mastercard SpendingPulse reported that online and in-store transactions it tracked were up three percent during the holidays, exceeding its own 2.4 percent forecasted gain.

Looking ahead, the Congressional Budget Office estimates that the U.S. economy will grow 4.6 percent his year, the fastest increase since 1999. The prospect of vaccinated Americans and other protective measures makes it more likely than not that good times are ahead for the retailing industry.

Online sales grew from 13 percent in 2019 to 20 percent last year, according to Mastercard’s numbers, not 30 percent as was widely shared in a McKinsey report. That means, Mr. Phibbs explains, that 80 percent of all sales took place in stores. Don’t be in a rush to turn out the lights and lock those doors just yet.

DISCUSSION QUESTIONS: Do we place too much emphasis on what might happen and less accountability on what did when it comes to retail predictions? Do you expect a good year for retail in 2021 and in-store experiences?

Please practice The RetailWire Golden Rule when submitting your comments.
Braintrust
"As the saying goes: you can’t stop the waves, but you can learn to surf them. And that’s exactly what strong retailers will be doing in 2021."

"No definition of retail apocalypse should be based on store counts...The U.S. could close 25 percent of all our retail space and STILL have more per person than anywhere else."

"Call it a paradigm shift or a Jurassic moment or whatever, but to not recognize it is denying what’s taking place."

44 Comments on "The retail apocalypse didn’t happen last year, despite the coverage"

The “retail apocalypse” term has been overused for several years. Rather, what we have seen is a normal attrition of underperforming stores and debt ridden chains closing in recent years. This is a normal fact of business. There are always winners and losers. Retail weathered the pandemic much better than most suspected it would and there is still some pent up demand for fashion and luxury segments that should prove to have a better year in 2021 as more social and entertainment functions resume, albeit in a slightly revised fashion.

Predictions are only guesses, so we can’t be too hard on prognosticators. These are opinions and it’s up to readers to decide what they believe will be true. What these results show is just how resilient brick-and-mortar retailing really is. And notwithstanding the fact that there have been many retail business failures this last year – many being attributed (rightly or wrongly) to the pandemic – it’s not all bad news and there are many examples of great success. I expect a solid bounce-back in the latter half of 2021 — and perhaps sooner if the pandemic can be brought under control.

Clickbait headlines and catch phrases are an easy sell. It is harder to do primary research and then look for corroborative evidence. I am not specifically pointing at anyone, but it’s just the nature of the news and opinion cycles. For business news, it is even harder as there is always a lag of one or two quarters before official numbers are available. That means there is always a huge chance of underestimating or overestimating the impact.

As I note in the full article though, those initial claims that 25,000 could close were never updated and only revealed in a casual email.

We always have apocalypses because that makes for a more compelling story than a few stores having issues. We see this too in predictions for the future. I’ve said before and I still believe that mostly we want to be back to normal after the pandemic, which for most of us means going to stores to shop. That desire will override our use of online.

Just looking at the “majors” is like NRF declaring sales were up for the holiday season because they include grocery and don’t include restaurants.

It was a God awful year. Don’t kid yourselves.

Agreed. 2021 will be kind to those retailers who have resources and can grow their e-commerce capabilities. Retailers that decided last year to try to milk the last dime out of legacy systems won’t fare so well.

As someone who has made a living on making predictions, I definitely agree that people are more interested in what *might* happen than what actually happened, and also simultaneously people are not interested in your accuracy as a gauge for whether they should listen to you talk about what might happen (see: political conspiracy theories). I can tell you from our own aggregated customer performance that store sales were down about 8 percent to 9 percent in 2020, which hides a huge quarterly swing. March and April were down over 50 percent, which means retailers (and remember these are mostly non-essential) made it all up in later months. They were up 5 percent to 10 percent year-over-year coming into the pandemic. But that’s just looking at stores. For retailers with strong online operations, their sales will be up that 2 percent to 3 percent, and for retailers with strong omnichannel operations where they can flex between online and stores for both demand and inventory, they will be up more than that. I think a store… Read more »
9
|
0
-   Share

Thank you as always for your considered response, Nikki.

Some sectors and areas of retail did suffer. Restaurants had a very tough time. Department stores saw footfall plunge. Apparel sales were pretty weak. And some retail balance sheets were severely damaged.

However others areas thrived. Mass merchants, home improvement stores, and grocers had their best ever years. Online surged and many retailers adapted by introducing new services like curbside collections and ship from store. And even apparel retailers managed to improve margins as they reduced inventory and pulled back on discounting.

This polarization has been in play for a long time and one of the issues is that, very often, it is the negative that gets amplified. Good retailers will look for the positives and the opportunities.

As the saying goes: you can’t stop the waves, but you can learn to surf them. And that’s exactly what strong retailers will be doing in 2021.

No doubt that “apocalypse” was overly dramatic but as Paula points out, there are a lot of closures and even more that were prevented due to PPP and other relief mechanisms. And let’s be mindful of the vast number of Chapter 11 Bankruptcy filings that we’ve seen and the bailouts/infusions that saved countless other reorganizations.

How about Retail Darwinism as a better descriptor?

Yes, Retail Darwinism. That is how it should be.

I’m good with that.

I gotta agree with Bob. “Apocalypse” is a total exaggeration. To me it brings to mind 90 percent or more, maybe even 100 percent of all retail going away. But it surely is a good word for the media. One wonders who those articles were written for. It strikes me that is not something a consumer would pay much attention to. Maybe it was written for us? But we know better. Back to reality — will a huge number of store closings continue? It started before the pandemic and will continue for years. Will retail ever grow beyond the rate of population growth plus inflation? Not likely, but it will surely continue to move from brick-and-mortar to online. And, even faster than the rate of store closings, the rate of square footage will rapidly diminish. If people get more money and jobs, there will be a nice bounce in 2021. But expect shoppers who have experienced the ease and convenience of online to suddenly spend a lot of time in stores.
1
|
0
-   Share

It seems store closures by Coresight’s own measures average about 10,000 so isn’t that really the norm?

It’s true that many of the stores that closed multiple sites in 2020 were already in trouble, or were unable to adapt to new ways of shopping. (It’s also clear that the big box stores with the most robust omnichannel or biggest breadth of assortment fared the best — think Target, Walmart, and food retailers.) But more than one thing can be true at the same time.

There is no denying that thousands of independent retailers closed their doors last year — mostly because they had to shut down for an extended period of time, or couldn’t maintain their payroll given lack of demand. “Apocalypse” may be too strong a word (closer to the truth for the restaurant business), but 2020 was a difficult year for many. In every city where panelists live, I’m sure there are plenty of examples of retailers lost to the pandemic.