The politics of sick leave 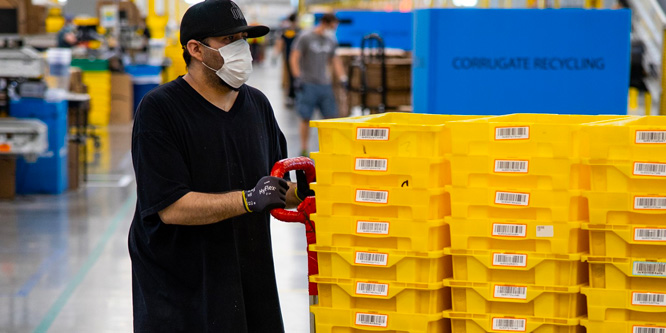 Paid and unpaid sick leave policies are facing wide scrutiny amid reports of infections and deaths among retail, warehouse, factory and delivery workers.

For employers, generous sick leave policies may be open to abuse even as greater protections are being demanded by workers for the new risks they are facing.

Many retailers have recently rolled out emergency measures that have extended paid sick leave time to 14 days — the period public health officials recommend for quarantine when someone tests positive for COVID-19. Legislative action, unions and worker concerns were among the factors driving the measures.

In order to claim paid sick leave, however, employees in many cases have to test positive for COVID-19, a challenge given the continued lack of widespread testing. Employers sometimes require a doctor’s note for individuals who say they are forced to self-quarantine because a household member tested positive. Some chains are now allowing paid sick leave if symptoms are evident, although those decisions are made on a case-by-case basis.

Critics charge that possibly-infected workers may be showing up for a paycheck due to the challenges of getting testing and proving symptoms. Part-time workers also often aren’t eligible for paid sick leave.

Amazon.com in March became one of the few companies to offer unlimited, though unpaid, time off to hourly workers. On Friday, however, Amazon announced that starting May 1, it will instead ask workers who want to stay home to use their regular accrued time off or request a leave of absence.

The change follows reports of high rates of absence at Amazon’s warehouse due to worker concerns.

Amazon’s absence policy will still “cover COVID-19 circumstances, such as high-risk individuals or school closures.” But warehouse workers quickly expressed concern that the loss of the unlimited unpaid time off will force them to choose between protecting their own and their family’s lives or their livelihood.

An Amazon warehouse employee told Business Insider, “I think it means they want people who don’t want to come to work to start quitting.”

DISCUSSION QUESTIONS: Do you see more benefits in lenient versus strict paid leave policies amid the coronavirus pandemic? What steps could retailers take to limit employee abuse of paid and unpaid leave?

Please practice The RetailWire Golden Rule when submitting your comments.
Braintrust
"It's not in the best interest of public health or employee morale to exclude part-timers from paid leave given retail's outsized reliance on them."

"Our country’s economic dichotomy is now on full display. Kudos to savvy retailers who are attempting to bridge the gap."

9 Comments on "The politics of sick leave"

The problem for Amazon isn’t the “lenient vs. strict” paid leave policy, but the workers’ perceived lack of proper protective precautions, which leads to “sick outs.” It’s not in the best interest of public health or employee morale to exclude part-timers from paid leave given retail’s outsized reliance on them. The industry standard will have to change. Employees will take advantage of “lenient” policies as long as they feel they have been treated unjustly. Once they adjust to the new normal, I expect businesses will earn their loyalty and engagement.

No easy answers here. Only a large scale roll out of antibody testing will prove that someone asymptomatic got the virus in the past, and is now safe from it. To reduce the abuse, the benefit eligibility can be fine tuned based on the incidence rate within the neighborhood of a particular worker, and incidence of the virus in the immediate family.

Additionally, guaranteeing that someone can come back to work at least for the same duration that they took unpaid sick leave — giving the workers an opportunity to earn back the lost dollars — would alleviate some of the concerns.

Our country’s economic dichotomy is now on full display. Americans who are well-off can use sick leave and company-furnished health insurance as needed without much disruption to their lives. In contrast, most hourly workers who get sick must either forgo wages or continue to work while ill. Kudos to savvy retailers who are attempting to bridge the gap.

You’re exactly right, Cathy. I’ve never believed that health care should be dependent on the type of job or one’s employer. This pandemic (again) surfaces this issue.

Pre-pandemic many retailers had pretty draconian sick leave policies that assumed the employee was faking it. Those policies were based on a history of abuse and the need to have a one-size-fits-all approach. Better to be a bit more lenient to serve the majority of workers, and weed out the abusers. It takes more time for management, but will create a stronger team with fewer problems long-term.

In today’s connected world, events that drive retail sales also drive retail politics. COVID-19 is an event, a serious and scary event. But it will most likely prove to be a controllable virus to the same extent that others have been in the past, which is to say that we won’t ever eliminate it entirely and it will continue to affect public health in the same way “common flu” does every year. The question is how we are reacting with policies that will likely become permanent. Should retailers and other businesses provide a more generous sick leave policy? Should we try something completely different than our current system? Those questions are valid and I certainly don’t have the answer. But is the current flurry of legislation and protest a knee-jerk reaction to an election year and a classic example of the “never let a good crisis go to waste” philosophy? The answer to that one is clear. Action driven by fear, emotion and opportunism seldom makes for good strategy, policy or government.

There is no question that the right thing to do at a minimum is to allow someone who has COVID-19 symptoms the recommended 14 days leave. The question is, can the company afford make this a paid leave? If the answer is yes then regardless of the employee’s employment status and the company’s policies before this pandemic, they should do so.

Retailers need to not only define specific, reasonable benefits during this temporary crisis, but this also reminds us that we need to be agile enough to manage through the emergencies of the future. Look around at several retailers around the world, and don’t be too proud to borrow the best ideas you see working worldwide. Expand your views so you can find the real innovation.

I opted for the “somewhat strict,” but there’s no obvious answer. Certainly we don’t want sick people at work, or even people who might reasonably seem to be sick. But “reasonably” is the key word here: the dishonest, or just neurotic may be few in number, but there are still enough of them that a policy of unlimited PAID sick leave would bankrupt most any company.

Braintrust
"It's not in the best interest of public health or employee morale to exclude part-timers from paid leave given retail's outsized reliance on them."

"Our country’s economic dichotomy is now on full display. Kudos to savvy retailers who are attempting to bridge the gap."