The latest NBA power move is selling ads on jerseys 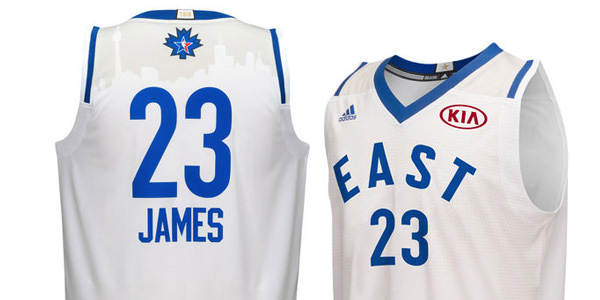 The thought that either of my favorite sports teams — the Green Bay Packers or the New York Yankees — would mar their iconic uniforms with the logo of a sponsor horrifies me. The same goes for selling the naming rights to either Lambeau Field or Yankee Stadium. And yet, that’s where the world of sports marketing is going these days. The latest evidence is the news that the National Basketball Association is joining NASCAR and professional soccer leagues around the globe in selling sponsors the rights to advertise on team jerseys.

My personal aversion aside, it’s clear that sponsors believe there is marketing value in putting their brand names on jerseys as well as on the facades of arenas and stadiums.

Last year, the NBA granted Kia Motors the rights to put its logo on player jerseys for its 2016 and 2017 All-Star Games. The NBA Store, as well as retailers including Dick’s Sporting Goods, sold replica jerseys sporting a 3.25-inch-by-1.6-inch patch with the Kia name. The NBA Store website currently has a Lebron James All-Star Game White Eastern Conference Swingman Jersey from Adidas on sale for $81.99.

According to the latest announcement, individual NBA franchises are engaging in a test that will allow them to sell 2.5-inch-by-2.5-inch patches on their team jerseys. The NBA commissioner, Adam Silver, believes the 30 teams in the league could generate up to $100 million annually through the sponsorship program.

“I think the greatest impact will be on sort of this amplifying effect of a company choosing to associate directly with a team’s jersey, then going out and promoting that relationship in the larger market,” Mr. Silver told The Associated Press. “I think that will lead to greater engagement of our fans with these teams.”

The NBA will be watched closely by other leagues who may considering following suit on sponsor logos. Jerseys, unlike the All-Star version, will not sport sponsor logos except when sold in their own team stores.

Please practice The RetailWire Golden Rule when submitting your comments.
Braintrust
"First, how will the sponsor feel when one of the players linked to their name does something that casts him and, by association, them in an unfavorable light?"

"There is huge revenue in it for the teams. Personally, I abhor it."

"The sponsorships are something the teams should certainly pursue. There is money in it and brands are willing to pay it. This is hardly breaking new ground."

Like George, I’m a purist when it comes to sports uniforms, but I fully expect most teams to jump on the opportunity to realize additional revenues. After all, players have been paid to wear sponsors’ shoes for many years. Ads on uniforms give brands and retailers a great avenue to generate impressions with fans. Let’s hope the interested brands run the ROIs before getting stars in their eyes and taking the hefty monetary plunge.

I can understand the teams need to raise money given the huge salaries they pay players, but I wonder about a couple things.

First, how will the sponsor feel when one of the players linked to their name does something that casts him and, by association, them in an unfavorable light? Unfortunately we all know this is not a rare occurrence.

Second, is this the first step in the NASCARization of sports uniforms?

It will work until people (fans?) get sick and tired of it. There is huge revenue in it for the teams. Personally, I abhor it. If I go to a sports event it is to see the event and the players play. The advertising is unwanted noise. And by the way, the same goes for selling the naming rights of the sports venues to businesses — awful, impersonal, annoying. What happened to naming the venue after the team, or an iconic historic star of the team, or the neighborhood on which it stands?

The NBA is a for-profit business and is always looking for ways to expand revenue and markets. We already see these sponsorships in other sports so the move by the NBA is not a pioneering one.

Investments in sports marketing is more risky as it tends to be longer-term and is closely linked to the prospects of a specific team or athlete and not an entire league. Additionally, having at least a national market, if not a global one, is probably needed to justify the investment.

At this point, I think a wait-and-see approach for most retailers is appropriate. Global brands are probably more likely to test the waters.

The sponsorships are something the teams should certainly pursue. There is money in it and brands are willing to pay it. This is hardly breaking new ground. Adidas, Under Armor and Nike pay millions for their logos on college jerseys. Under Armour is even paying for logos on high school jerseys. Please don’t give me the argument of the purity of sport. This is all business. With regard to ROI for the sponsors? I can’t see how it works. They pay millions. I could not tell you which college teams have what sponsor, except Notre Dame with Under Armor. That is because I read the article on how much Under Armor paid, not that I ever noticed the logo on the uniform. I believe it is all hubris and ego. Back in my brand days, we had opportunities to get involved in the sponsorship of athletic events and it never projected to pay out. Imagine the reaction if you are the new brand manager and you write a recommendation … “We just did a thorough… Read more »
0
|
0
-   Share

Yes. This is an avenue that is now open and should be utilized for those retailers/brands looking to create long-term brand affinity. This branding opportunity can be a very effective way to engage and influence the fans of today to be brand loyal for life. Watch for team names being for sale next.

World football, i.e. professional soccer, has been selling ad space on jerseys for years. I’m surprised that American sports has held off this long!

George, I am not ready to put my personal aversions aside. As Paula so succinctly said, NO. I too am a purist even though I accept the Designated Hitter rule in Baseball.

I am wondering how the potential conflict between a team sponsor and the athlete’s personal sponsors will really be worked out. These men are mega millionaires and are the ones running the league. If they say no, it is not going to happen, is it?

Why not? It’s visible real estate. Highly visible! When it makes sense, naming rights, logo rights, etc., are great ways to connect with a targeted audience.

I think if it’s part of a comprehensive branding program — Nike or Adidas, for example — where the products are actually connected to the sport, then it can work … indeed it can work quite well. But if it’s a bank or car or something along those lines, then no (and get your ^&*% ugly logo off of my team’s uniforms, thanks you!).

I think this is an interesting idea at the high school level due to budget constraints and also allow retailers to have more community inroads as a result.

Braintrust
"First, how will the sponsor feel when one of the players linked to their name does something that casts him and, by association, them in an unfavorable light?"

"There is huge revenue in it for the teams. Personally, I abhor it."

"The sponsorships are something the teams should certainly pursue. There is money in it and brands are willing to pay it. This is hardly breaking new ground."