The Container Store cleans up with a Netflix series 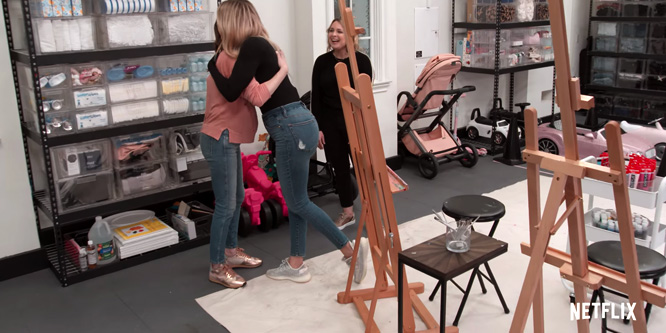 The Container Store experienced record sales over the past few months and the revenue spike is being attributed to a partnership with Netflix that has paid off big time.

The Container Store’s products are featured on Netflix’s series — “Get Organized with The Home Edit” — aimed at helping viewers get their homes in order, according to Cheddar. In September, when the show debuted, the retailer experienced a sales increase of 17.8 percent  and elevated sales continued into October.

The show features the two founders of The Home Edit, Clea Shearer and Joanna Teplin, helping clients, including celebrities, declutter and organize their homes. Ms. Shearer and Ms. Teplin use a line of home organizing products by The Container Store created specifically for the show. The Container Store’s e-commerce business was up 86 percent in the second quarter.

Some critics have been less than thrilled with the show itself and its product marketing focus, which New Yorker writer Kyle Chayka says turns the program into an “elaborate infomercial” rather than entertaining television.

If the show is an elaborate infomercial, it is one that seems to have appeared at the right time. People are spending more time at home than ever due to the novel coronavirus pandemic and, in some cases, have more time to spend on addressing long put-off home-related tasks and projects.

“Get Organized with The Home Edit” isn’t the only Netflix series geared towards home decluttering to have an impact on U.S. consumer habits.

In early 2019, the series “Tidying Up With Marie Kondo” had fans of the show looking not so much at what brands they were using as which ones they were not. Promoting the “KonMari” method of home organization, Ms. Kondo encouraged viewers to rid themselves of clutter in the form of products they owned that did not “spark joy.” This led to a nationwide spike in donations to thrift stores and speculation that categories like fast-fashion, built around disposable, short-shelf life products, would take a hit.

Ms. Kondo is also getting her own product line in another Netflix/Container Store tie-in, according to the KonMari website. The Container Store x KonMari collection will consist of 100 organizing tools made of premium, sustainably-sourced materials like bamboo and recycled fiberboard. The assortment will be released online and in stores in January 2021.

DISCUSSION QUESTIONS: How important is product placement for major retailers like The Container Store? How might social media outlets provide content creation opportunities for retailers and brands unable to swing a production deal with the likes of Netflix?

Please practice The RetailWire Golden Rule when submitting your comments.
Braintrust
"I am fine with product placement in television and movies as long as it’s not in your face. I don’t expect to pay for a show that rivals QVC in subtle sales techniques."

"I really wouldn’t care if anyone criticized the effort as “an elaborate infomercial” if it throws off 17 percent and keeps growing."

"I think this makes great sense, but I have to believe that COVID-19 and the reduction of safety in our cities has a lot to do with this."

Home organization, home decor and home improvement are the categories that can benefit greatly. The industry already knows this, that’s why we see so many magazines on these topics. A Netflix show is a logical extension to those. It makes a great before/after comparison and has a motivational and aspirational aspect to it. I remember Home Depot’s slogan: You can do it, we can help.

I think you have said it. And the ability to produce professional-class “how-to” videos for public consumption, and for free, is an extremely powerful tool to help such companies compensate for the downturn in in-store shopping.

I am sure that the show has helped to drive some sales for The Container Store, but this is more about creating visibility and raising the profile of the brand than actually creating underlying demand. The sales increase is mostly due to the pandemic-induced stay-at-home trend. People have done more home organization, more cleaning of closets, created more workspaces, cooked more, and are generally using their houses more intensely. As such, the demand for almost all of the products The Container Store sells is through the roof!

The Container Store’s tie-in with “Get Organized with The Home Edit” is same type of tie-in that the show Property Brothers has with Wayfair. They too have created a Property Brothers collection the is featured on their shows. The main difference between the two is, as opposed to the New Yorker’s assessment of Get Organized, the Property Brothers shows are entertaining. These are not the only show to work extensive ties-ins. This approach has been taken by several car companies. Based on the reported sales lift the conclusion is it generates sales.

Product placement has had a long history in the entertainment media space, with many success stories and quite a few misses. Like all forms of marketing, it’s a matter of ROI on the spend itself. How much is the placement going to cost my organization, how well is my brand being represented, what is the target audience for the media, how many impressions will I be getting, and what sort of new customer growth or revenue will be generated? Specifically for The Container Store, this has been a great win because of the massive spike in home organization and DIY home improvement during 2020. It’s a leading, respected brand in that space, and it provides the answer to the question, “Ok, but how can I do that for MY home?” for many home improvement show audience members. I expect to see additional collaborations between brands and the streaming, more agile content providers going forward.

I think this goes beyond simple placement. It goes beyond presenting the “what.” It demonstrates the “how” and “why.” Light bulbs go off. New ideas and actions go into motion.

At the beginning of the pandemic, how many people made lists of what they would do now with so much time at home? (Some people still have those lists, but with a few things crossed off.) Straighten the playroom, fix the closets, organize the kitchen, make the garage reasonably neat, etc.

The big challenge, of course, is when you see the mess, you are completely overwhelmed and don’t know where to start or for that matter where to finish. My guess is that the series covers almost every challenge on that list with solutions, products and how simple it is to get them at The Container Store.

The series is appealing and compelling (I watched it twice) and such a terrific advertisement for The Container Store’s clear plastic organizers. Oh, and they’re expensive.

I am fine with product placement in television and movies as long as it’s not in your face. I don’t expect to pay for a show that rivals QVC in subtle sales techniques.

I watched a couple of episodes of Home Edit before I gave up. The Container Store partnership didn’t strike me as anything over the top, but I couldn’t get past organizing things according to the ROYGBIV colors of the rainbow. Sure it’s pretty but good luck finding that book.

I think this makes great sense, but I have to believe that COVID-19 and the reduction of safety in our cities has a lot to do with this. People are cocooning, stocking up, and become preppers and this raises the need for home organization. So I think their sales would have boomed anyway but a product placement deal at the right time would turbo charge that boom into a sales explosion.

I really wouldn’t care if anyone criticized the effort as “an elaborate infomercial” if it throws off 17 percent and keeps growing.

If the point — or at least the M.O. — of the show is to showcase ONLY CS products, then I think the description of it as an informercial is entirely correct, and it should have a disclaimer run coincident to it. It sounds like an ethically grey area … and as was the case with Amazon’s surveying foray last week, I find myself weighing what’s “good” for a business versus what’s “good” for everyone else.

An insightful partnership by both brands. Much can be learned from this venture. Yet, for authentic home-organizing enthusiast, one has to wonder how far/long they can go before they cross the line with product placement vs sounding like an infomercial. They will want to stay true to their brand promise and authenticity.

Either way, it’s good to see some inspiration for the many who have long planned to organize their closets (self included), now…they might actually get to it.

Braintrust
"I am fine with product placement in television and movies as long as it’s not in your face. I don’t expect to pay for a show that rivals QVC in subtle sales techniques."

"I really wouldn’t care if anyone criticized the effort as “an elaborate infomercial” if it throws off 17 percent and keeps growing."

"I think this makes great sense, but I have to believe that COVID-19 and the reduction of safety in our cities has a lot to do with this."