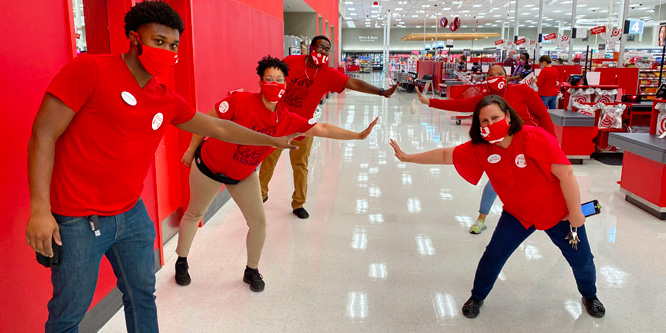 With millions of Americans having filed for unemployment since March, it’s hard to say that the tight job market that favored workers just a few months ago will come back any time soon. Even with the odds seemingly favoring employers at the present time, Target announced that it is raising its starting minimum wage from $13 to $15 an hour beginning on July 5.

The retailer’s decision to raise its starting pay is following through on a commitment it initially made in September 2017. Like other retailers, Target has been paying its frontline workers $2 an hour extra since the coronavirus outbreak. In essence, the new starting wage will keep entry-level associates at the same pay rate as they have been used to getting.

Target also announced that it is paying a $200 bonus to all its frontline workers in stores and its distribution centers as a thank you for their efforts to get through the early months of the pandemic. The retailer said that the newly-announced bonus, which will be paid at the end of July, is in addition to the $250 to $1,500 bonuses it paid out to 20,000 hourly store team leaders in April.

“In the best of times, our team brings incredible energy and empathy to our work, and in harder times they bring those qualities plus extraordinary resilience and agility to keep Target on the forefront of meeting the changing needs of our guests and our business year after year,” said Target CEO Brian Cornell in a statement. “Everything we aspire to do and be as a company builds on the central role our team members play in our strategy, their dedication to our purpose and the connection they create with our guests and communities.”

Target also made public that it will provide some additional perks for workers, including free access to virtual health care visits, regardless of whether employees are enrolled in the company’s healthcare plan. The 24/7 service is being made available to associates through the end of December. Separately, the retailer is also offering team members free mental health counseling sessions.

Earlier this week, Target also said it is adding Juneteenth, June 19, as a corporate holiday. Workers at the chain’s corporate offices will receive the day off with pay, while those working in stores will be paid time-and-a-half. Juneteenth recognizes the day in 1865 when a military decree issued by Maj. Gen. Gordon Granger informed slaves in Texas that they were free.

DISCUSSION QUESTIONS: How will Target’s higher minimum wage and other steps it has taken affect its associate recruiting and retention efforts and worker performance? How likely are Target’s competitors, notably Walmart, to follow by raising their minimum hourly wage to $15?

Please practice The RetailWire Golden Rule when submitting your comments.
Braintrust
"Target employees are consistently cheerful, as they know the company genuinely cares. That’s why Target attracts and retains top talent in an industry known for high turnover."

"Which retailer is winning the hearts of associates and customers? No doubt it’s Target. It’s not just what they do, it’s how well they do it. What a culture!"

"Target workers will certainly appreciate the pay increase and other perks. But this is also a shrewd PR move for Target."

Target employees are consistently cheerful, as they know their company genuinely cares. That’s why Target attracts and retains top talent in an industry known for high turnover. As a result, Target, its employees and customers all win. To sustain its low-cost leadership, Walmart won’t raise its minimum hourly wage.

Treating front line workers well will go a long way to improving the level of service they provide which increases customer loyalty and purchases. Target is a great company that has made a lot of good decisions during the pandemic and raising their minimum wage to $15, which is double the minimum wage in some states, will help them retain employees and compete with Walmart on a pay scale basis. I hope this encourages other retailers and businesses to follow suit, however, many retail segments have not weathered this pandemic as prosperously as discount department and grocery stores and affording higher wages may not be an option.

Target is putting money where it matters. They are thinking long term and it could prove to be very smart investment. I personally like the levels of cleanliness and the bit of upscale finesse in the stores compared to Walmart — which seems to be perennially understaffed.

Target workers will certainly appreciate the pay increase and other perks. But this is also a shrewd PR move for Target. Socially responsible shoppers may lean more heavily on Target for their needs — and the press will be all over this. This will make it tougher for other retailers to roll back the “temporary hazard pay” increases offered in response to COVID-19 as well.

Higher wages and benefits do not make a company an employer of choice. It will get the applicants in the door. Now the retailer needs a system to make sure they identify and hire the best of these applicants to build a winning team. The real key though is retaining them. To do this, it is critical for a retailer to make sure it has great managers. Employees join companies — but they leave managers.

Target has always been a great place to work, not just because of salary and benefits but because the company is fun and engaging. There is a true team atmosphere at Target which is bolstered by the fact the company innovates and invests, which is encouraging for the teams that work there. Enhancing wages and benefits are necessary and will be welcomed. However, Target also has to look at resourcing as, from my informal conversations with many shop-floor associates, there is a feeling that shops are under-resourced to cope with the complexities of omnichannel and all the demands that are placed on store operations.

Target is clearly building on their success and momentum. They are now established as an “essential” retailer that will stay open in a pandemic. That’s huge in and of itself. And now they are proving to be a thoughtful and benevolent employer. That’s an unbeatable combination.

Target already has a positive reputation as a great place to work. The steps Target is taking will reinforce this image and up the game for other retailers. Everyone raves about Wegmans’ excellent associate policies and you feel the positive employee vibe every time you walk into a Wegmans store. Target is well on its way to achieving the same level of associate satisfaction and positive in-store vibe. Looking at this from another angle, the job market will continue to get tighter throughout retail management, including corporate offices. Target is creating a great career path opportunity to advance great associates from the store into the corporate office.

Let’s all agree that the skill sets needed for success are changing, and require a higher level of sophistication than was previously needed. Target’s move elevates associates, encourages longer tenure, and helps deliver better service. Congratulations to Mr. Cornell for leading the way.

Target is winning the retail associate war on perks offered, no doubt about that. Doing what Georganne and I do for a living, we have walked into many Target stores and simply asked random associates how they like working there. Their answers are always positive and better. When a new employee is hired, it is important that we understand that they put on the “attitude and performance” routine that they feel from the other current associates. With such a high associate satisfaction index at Target, which certainly affects customer satisfaction standards, the assimilation the new associates automatically assimilate. So which retailer is winning the hearts of associates and customers? No doubt it’s Target. It’s not just what they do, it’s how well they do it. What a culture!

What was the old adage about, that keeping your employees happy will keep your customers happy? Higher wages, benefits and recognition are all key to attracting top talent. Once you have a top team, then it’s one’s responsibility to train, advance, coach and listen to them.

Great start for Target! But it has to follow through for all employees on free, great benefits and healthcare, better pay ($20 per hour minimum), more paid holidays including one additional day for a paid voting day, a bonus paid birthday holiday, greater employee discounts to encourage more in-store shopping from all employees, one friends and family virtual shopping day per year, educational assistance for tenured employees (full college tuition paid for all “A” grades, partial assistance for all “B” grades), corporate matching for select donations chosen by the employee, store driven committees to improve employee communications and input, and Target daycare placed in all stores for all tenured employees who are working that day.

Changes like these will make Target a great place to work, a place that people want to go to work, and a place for people to stay and work (especially daycare).

I worked at Target 35 years ago and felt valued as a team member, even if I was a part-time teenager. Customer loyalty cannot be built if the employees are not also loyal to the brand. I think this is a smart PR move, but also consistent with Target’s values.

The unemployed will always go for the higher paying jobs, although I doubt Target is having issues recruiting right now. They probably didn’t even need to raise their wages, but it makes for a great story and who knows, they may truly care about their employees and retaining top talent. Walmart will get around to raising wages when it’s convenient or required.

Braintrust
"Target employees are consistently cheerful, as they know the company genuinely cares. That’s why Target attracts and retains top talent in an industry known for high turnover."

"Which retailer is winning the hearts of associates and customers? No doubt it’s Target. It’s not just what they do, it’s how well they do it. What a culture!"

"Target workers will certainly appreciate the pay increase and other perks. But this is also a shrewd PR move for Target."