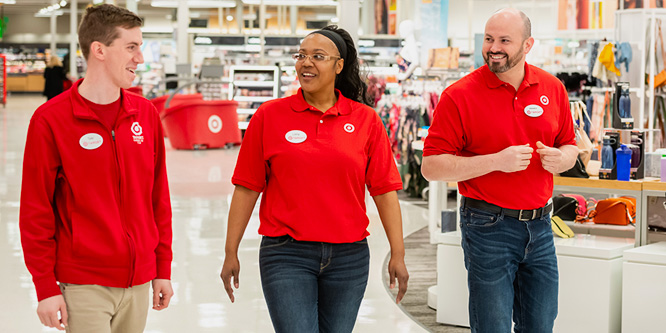 The year 2020 has been great for Target from a sales standpoint. It has not, however, been a banner year for the retailer’s Minneapolis hometown, which found itself at the center of a national movement for racial equality and police reform following the death of George Floyd while in the custody of officers in the city.

A Target store located across the street from protests in Minneapolis was looted, even as the vast majority of those protesting did so peacefully. Target went on to shorten operating hours or temporarily close locations as anger over Mr. Floyd’s death and those of Ahmaud Arbery, Breonna Taylor and others built momentum for change in America.

Target CEO Brian Cornell has pledged that his company will be part of that change in the wake of Mr. Floyd’s death. Yesterday, Target announced plans to increase the numbers of Black employees it hires by 20 percent over the next three years.

“A diverse workforce and inclusive environment not only creates a stronger team, but also provides the perspectives we need to create the products, services, experiences and messages our guests expect,” Melissa Kremer, chief human resources officer, said in a statement. “The next step in this journey is being even more transparent with our progress.”

Target said it will increase its “focus on advancement, retention and hiring” and identified five areas where it will direct its attention:

DISCUSSION QUESTIONS: What will Target’s commitment to the hiring, retention and advancement of Black employees mean to its brand? Do you think having a greater representation of Blacks, Latinos and women in Target’s workforce will change the company in any significant way in the years to come?

Please practice The RetailWire Golden Rule when submitting your comments.
Braintrust
"A continued focus on DEI for Target will allow it to gain market share with today’s consumer and be an employer of choice. "

I’m hesitant to say anything because someone will scream “white privilege” but gee, if half of the workforce is non-white, how much more do they think it should be? And if a quarter of management is non-white, they are well on their way to the one-third representation pure demographics would suggest. Likewise if 42 percent are women, you’re awfully close to halfway – the increase to even these out is unlikely to have that much impact.

Here is what I don’t get – from the numbers, it looks like Target has been putting people and diversity first and I know they have been dedicated to it for many years, but I guess I am confused where they want to go next?

The Chicago Tribune reported on this story this morning. Where the diversity disconnect is, is at the higher levels of the company. 61 percent of managers and 71 percent of company officers and 75 percent leadership is white. This implies that the area the company needs to work on in terms of diversity is identifying individuals in the workforce the can be developed for higher levels within the organization.

Steve – the article above says 24 percent/42 percent, which is where I’m generating the question – if I force the mix to say 30 percent/50 percent non-white/female, how much is that going to change the operation of the company?

Target’s empathy and EQ differentiate the retailer from its efficiency-driven rivals. By putting people first, Target shows a genuine commitment to diversity, equality and corporate social responsibility. If Target promotes more Blacks, Latinos and women to its leadership team, more consumers may feel represented, valued and loyal to the chain.

A continued focus on DEI for Target will allow it to gain market share with today’s consumer and be an employer of choice. A diverse team delivers richer output and keeps both customers and employees more deeply engaged.

I am pleased and surprised at the numbers. From top to bottom, Target is clearly a diverse company. Perhaps that is why they have made so much progress.

McKinsey found ethnic and cultural diversity’s correlation with outperformance on profitability was statistically significant, at the board level and beyond. Additional studies corroborated their findings.

Ethnic and cultural diversity brings different perspectives to solving problems, bringing new ideas. The mixing of these ideas and solutions lead to the best outcomes. Look for Target and other companies that emphasize diversity to outperform those that just talk the talk.

I am African-American and a retiree of Target. I joined Target in 1976 as a store manager when Target only operated 50 stores. When I moved on in my career Target had 1,200 stores and I had advanced to executive VP of a $4 billion division. It’s not about how many of any one group, but about how few if you are not representing the community in which you operate.

Hire the best, prepare them to help your company grow and everyone wins.

Target prepared me to become a CEO of three different companies. And I helped Target grow from a mid-size company to a very large company, enriching all their stakeholders, including me and my family.

Although Target may have better diversity in its workforce overall — possibly even in management, than other merchants and brands, they have joined the chorus of long-established corporations that all of a sudden in the summer of 2020, have a diversity or Black Lives Matter PR statement. Yes statement. Policy is yet to be seen.

Civil rights came to a head in the 1960s and Dr. King was assassinated 52 years ago. While advancing true equal opportunity, diversity, and acknowledgment are great things, no corporation deserves accolades for doing what they’ve had decades to do, without being pressured by extreme events, including hei·nous deaths.

The numbers reported here certainly give the appearance Target is already a very diverse organization — perhaps that is why they have become such a favorite retail brand to so many customer demographics. Where it appears they intend to focus is at higher levels of management where the numbers could still show more diversity. What remains to be seen is exactly how they intend to achieve this.

While it’s refreshing to see more and more companies, like Target, make statements about their newfound dedication to diversity, it still raises an eyebrow that they feel compelled to announce this in 2020 rather than having demonstrated this across previous years. Like so many companies that are suddenly “woke” to the issue of diversity and social justice, there is always a question of “how” they will accomplish this that’s left unanswered.

I will credit Target, given the diversity numbers reported, for having performed better than other businesses in an area that has been long overdue.

Judging strictly by the numbers, it sounds like Target is already diverse … indeed it sounds like POC and women are overrepresented (in relation to the population); so I’m confused what the criteria are for their plan.

As to whether or not it will “change the company,” I suppose a little bit, but it’s mostly responding to customers that changes a company.

Target has a long and consistent track record of commitment to a diverse workforce across all of their operations. I spent almost 30 years in the Dayton Hudson organization and I can’t ever remember a time when this wasn’t the case.
I can also say that they would be the first to acknowledge that they can do better, especially in their leadership ranks. I applaud any company that has the courage be up front about their opportunities and to continue to commit to work harder on issues of racial equity.

Braintrust
"A continued focus on DEI for Target will allow it to gain market share with today’s consumer and be an employer of choice. "