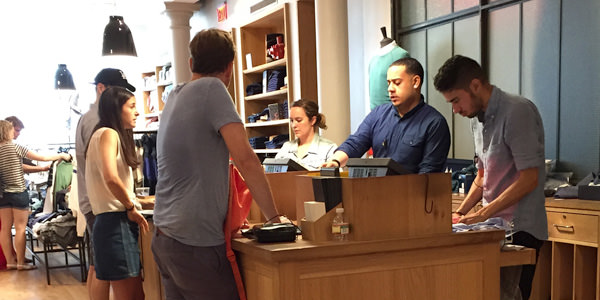 Through a special arrangement, presented here for discussion is a summary of a current article published with permission from Knowledge@Wharton, the online research and business analysis journal of the Wharton School of the University of Pennsylvania.

A university study has quantified that training associates leads to a 23 percent lift in sales.

Marshall L. Fisher, professor of operations, information and decisions at Wharton, and his colleagues began exploring the topic about 10 years ago by collecting millions of responses of customer satisfaction survey data from retailers. What they found was that the difference between stores rating high or low in customer satisfaction could be traced to four factors asked of customers:

Researchers found that while three of the four levers had been studied quite extensively, the value of stores associates’ knowledge had been largely ignored.

Two years ago, however, Prof. Fisher was contacted by Experticity, which develops training modules for brands that are taken by retail associates. Experticity helped gather data from a large department store with around 300,000 sales associates. For a three year period, they looked at weekly sales for each associate and how much training they were receiving.

One surprising finding was that associates specifically trained on the attributes of one brand still led to an aggregate gain across all brands. Said Prof. Fisher, "Apparently, just breadth of knowledge that would let an associate compare across brands was a rising tide that lifted all boats."

The professor, however, added that training should lead to benefits across a number of service industries and with other tasks, such as call centers. He added, "I think that’s one clear implication: that if you measure the value of investing in your people — in this case, training — it turns out to be much higher than people tend to believe."

Why aren’t retailers investing more in training their staffs? What aspects of associate training do you think are most helpful? Have you witnessed a link between training and improved sales?

Please practice The RetailWire Golden Rule when submitting your comments.
Braintrust
"I think it’s incumbent on tech providers to make applications as easy as possible to use because that will be the sales associate’s "reference material."

"Does it really take a study to find that training increases sales? I doubt if there is one BrainTrust member that would disagree with that. The problem is that retailers see staff as an expense, not an asset."

I can tell you having thousands of online learners in my SalesRX.com retail sales training program that for some retailers the focus has shifted back to being more human in an era when technology and becoming more robotic seems to be the norm. They too are enjoying increased conversion in sales for associate.

While training is on the rise, managing people is messy so many retailers give up, cut hours, cut training and pin their hopes on an app.

With 85 percent of sales still being made in a brick-and-mortar store for the foreseeable future, sales training needs to have a serious place at the table in all brick-and-mortar retailers.

When the employee is probably only going to be working for you for eight months you don’t want to invest too much time and money in them. Training staffs is for classier retailers that pay more and have less turnover. Otherwise if you have a low-wage high-turnover labor model, it’s a waste of time and money.

The data in our recent store study was shocking. The majority of retailers allocate less than 10 hours per year for training existing sales associates.

It’s not going to be easy to do; the retail model is built on reducing in-store costs as much as possible. I think it’s incumbent on tech providers to make applications as easy as possible to use because that will be the sales associate’s “reference material.”

Retailers aren’t investing more because labor is already one of the highest “costs” on their P&L. That said, recruiting and hiring replacement staff is perhaps even more costly than training and retaining. I have seen a definite link between increased sales and training that empowers associates to perform at a higher level. (Having personally delivered a number of these training courses, the results can be amazing!)

Is this study supposed to be surprising? Training drives revenue. I knew that when I was a store manager in the ’80s. The challenges are expense and staff churn, as they always have been.

It takes real funding to do effective training, including the time/labor expense of the trainers. That funding is often the first to get cut when business is tough. The other piece is that for most retail formats, staff turnover is high in the U.S., so that adds to the expense. There is no question that training how to serve shoppers and training on product knowledge help drive sales. These are points of differentiation that retailers can leverage if they create a real training program that is cost-effective while addressing their turnover issues. Quite often one will help solve the other. Many employees quit because of a lack of training.

There can be several reasons why retailers are not investing in training their staffs. As was pointed out in the article, training is a “now” expense with a promised future payoff.

For a publicly traded company the pressure is always on for meeting-to-beating the markets expectations for this quarter’s numbers. Selling the future value seems to be something the internet-based companies are far better at than are brick-and-mortar retailers.

Store managers are under pressure to meet certain payroll numbers in terms of hours and dollars. Failure to meet those objectives can mean loss of a bonus or their jobs. Without a separate training budget they have to figure a way to provide some training.

Because it is in the future it also means that if the retailer invests in the employee’s training, there is the question of if they will be part of the staff long enough to earn that future payoff. The counter argument is if they were trained better perhaps they would stay longer. Again, the model is: expense now, payoff later.

There is no question training goes hand-in-hand with both improved sales and retention. This is nothing new. What is surprising is someone paid someone else a lot of money to verify what everyone has known.

As stated already, many retailers are in a catch-22 with labor costs climbing, and this new $15 minimum wage issue is going to put even more pressure on the bottom line. My training is fairly simple, and other stores are more complicated, so costs will be all over the board on this. Everyone I hire has to sit with me before they start on day one, and they know from the get-go what I expect in terms of how we treat our customers. If they cannot engage in a very friendly manner they won’t last two weeks, but if they have an engaging personality, we can train them to do the work and details they need to succeed. I absolutely hate poor service and people who begrudgingly check you out as if they are doing you a favor, or worse yet, you are bothering them if you ask for some assistance, which happens in many retailers. How does someone keep their job with that attitude? Simple things go a long way to make a customer… Read more »
1
|
0
-   Share

Does it really take a study to find that training increases sales? I doubt if there is one BrainTrust member that would disagree with that.

The problem is that retailers see staff as an expense, not an asset. If the carpet is worn they replace it. They give the store a new paint job. They change their logo. They buy the latest and greatest in modern fixtures. Would any of those things increase sales as much as well-trained staff? We don’t need studies to figure this out.

The problem is how they look at their P&L. It is a stupid accounting issue that is driving poor management decisions. (BTW, the accounting is correct, it is the way it is used that is wrong.) Staff is an expense that impinges on margin immediately. “Improvements” get amortized over time.

Another positive of the increased minimum wage is lower employee turnover. This means well-trained associates will stay in their jobs longer. Retailers need to invest more aggressively in training sales staff and management to improve sales and profits. The payback is obvious from this important study.

My first comment: Training doesn’t cost. It pays! Take the time and the dollars to ensure your new hires are on-boarded properly. Second, realize that training isn’t something you did. It’s something you do. In other words, it’s not “one and done.” The best companies realize this. Once you have hired the right people and trained them well, reinforce this training with good follow-up. This could be short “pre-shift” meetings. Some companies do them once a month. Some once a week. And some every day. No doubt that training pays off. Put someone on the retail floor that is improperly trained and it will cost money in the form of lower sales and lost customers. Reverse the trend with training — even a minimal amount of it. As I looked at the four questions, that are the main criteria for success, it is obvious that training is the answer to the first two: Could you find somebody to help you? — Are your people trained to engage and welcome your customers as they walk through your doors?… Read more »
0
|
0
-   Share

While I agree that human contact is important sometimes, I also understand the issues that face retailers when it comes to training folks who may only be there a few months. Got to manage those costs down to the penny.

So I, like Paula, look to technology and tech vendors to create apps that are very user friendly and provide tutorials that the store associate can work through very quickly. How many especially younger folks today don’t know how to pick up an app and use it? How many haven’t used a tutorial?

The trick is giving the store associate the “right” tools. Not just access to what the customer has likely already read online, but the deeper questions and directions that the customer came into the store for.

But that’s just my 2 cents.

The main issue with training is sustainability. A retailer must follow up, reinforce and trade out these associates who do not respond to training tools. Unless a retailer is willing to commit to all of the above, the cost side of training is ALL that will remain.

Braintrust
"I think it’s incumbent on tech providers to make applications as easy as possible to use because that will be the sales associate’s "reference material."

"Does it really take a study to find that training increases sales? I doubt if there is one BrainTrust member that would disagree with that. The problem is that retailers see staff as an expense, not an asset."