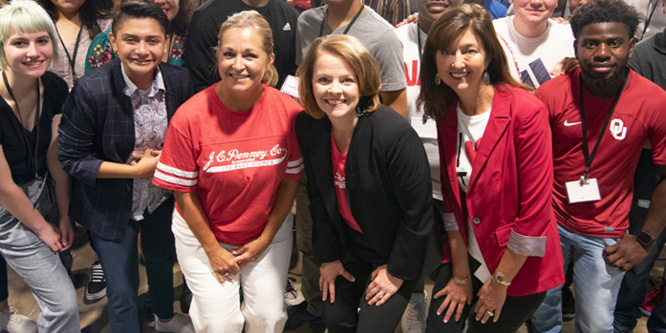 J.C. Penney, Macy’s and Neiman Marcus are three retailers that have at least one thing in common, besides the fact that they have all had to take drastic steps to deal with the hits their businesses have taken as a result of the coronavirus pandemic. All three have paid or are trying  to pay millions in bonuses to their executives after making big cuts to their businesses presented as absolutely essential to keep them going.

A $4.5 million bonus due to Penney CEO Jill Soltau has drawn scrutiny in light of that chain’s Chapter 11 bankruptcy filing and plans to close 152 stores, which will put thousands out of work. The bonus due Ms. Soltau, Bloomberg reports, was part of her contractual agreement signed when she joined the company in 2018 and was not part of a recently devised “pay-to-stay” offer prohibited under U.S. bankruptcy law.

Penney also announced on Wednesday that it is further reducing its corporate, field management and international workforce by 1,000 jobs.

“These decisions are always extremely difficult, and I would like to thank these associates for their hard work and dedication,” said Ms. Soltau in a statement. “We are committed to supporting them during this period of transition.”

Macy’s, according to CNBC, paid out $9 million in stock bonuses to CEO Jeff Gennette and five other executives days after cutting 3,900 corporate jobs. These cuts were on top of the chain’s plans, announced in February, to permanently close 125 stores over a period of three years. Macy’s, which has avoided bankruptcy, furloughed the vast majority of its workforce earlier this year when the pandemic forced it to close stores to customers. An unspecified number of furloughed workers returned to their jobs in the first week of July.

The U.S. Justice Department is contesting $10 million in bonuses that the bankrupt Neiman Marcus Group is looking to pay CEO Geoffroy van Raemdonck and seven other top executives at the retailer. Henry Hobbs, the government’s lawyer monitoring the case, contends that Neiman Marcus needs to demonstrate that the executives have materially helped to improve its earnings. According to a Wall Street Journal report, the company paid the eight executives more than $3 million in bonuses before it filed for Chapter 11 in May.

DISCUSSION QUESTIONS: How does the payout of large financial bonuses to top executives at struggling and bankrupt retailers affect the morale and performance of employees within those organizations? Do you think corporate America, specifically the retail industry, needs to rethink how employees from the frontline to the c-suite are compensated for their work?

Please practice The RetailWire Golden Rule when submitting your comments.
Braintrust
"It's tone deaf and is not going to help morale in any manner, shape or form. Better the C-suite occupants should go and work WITH the front line workers for a day or two."

"These acts really cause people to ask, where is the oversight from the boards?"

"Not to throw shade, but well-run companies don’t do this."

These are terrible optics for the front line workers who are literally risking their health and welfare to earn a living. That said, this is not an issue specific to retailing – this is how the corporate world works. The executives at the top always get paid well, regardless of what’s occurring in the business. As long as compensation/payout decisions are made by the people at the top, this will always be the case. What needs to change are bankruptcy laws that allow for this kind activity while employee pensions are cast aside. It’s sad and disgraceful.

A number of companies in the past have paid “retention bonuses” right before they put the company into bankruptcy. I find that ironic too. It is almost like the management empties out the safe for good and then goes and files bankruptcy.

In this case one might question the need for a retention bonus: competition for talents in the retail top executive arena is at an all-time low, and this move makes you wonder whether these executives will have the internal support to steer their teams out of bankruptcy.

Not good optics, but it is an unavoidable situation. The executives typically have contracts with guaranteed payouts, even if much of the expected compensation is tied to performance. I would guess these are minimums they have negotiated or that the board has approved. In the overall scheme of things these payouts to executives would not make a material difference but, as I said, bad optics nevertheless.

Maybe some boards should look at implementing new contracts to withhold payments during times like this. Otherwise, the contractually-obligated party line is a loop-hole to compensate executives, at this point, for doing nothing more than taking on a job title.

Great point Rachelle. In fact, there should be Board liability attached to this. If this became a corporate governance issue that was also connected to Director and Officer (D&O) insurance, that might actually get some attention.

See, this is the dictionary definition of “tone deaf.” It’s one thing to give someone a “stay” bonus in more normal times when a company goes into chapter 11 — I can wrap my head around that — but NOW? Seriously?

It’s tone deaf and is not going to help morale in any manner, shape or form. Better the C-suite occupants should go and work WITH the front line workers for a day or two.

It’s not a good time to anger the people. It’s just not.

I was once president of a licensed business, a division of a larger corporation. We lost the license. We paid the STAFF retention bonuses so we could transition the business to the new license holder as professionally as possible. 100 percent of the staff stayed until their planned exit date.

When companies have furloughed, laid off and asked their staffs to take pay cuts – and then the leadership gets huge payouts – it just looks bad. While I know these bonuses are contractually baked in for those in the C-suite, but I can guarantee this is not going to boost morale at these companies.

This action is simply beyond stupid. Rewarding top executives when the company is near bankrupt is simply wrong, period. The shareholders need to make sure this never happens, or risk losing all of their front line workers — who see the greed and wonder why they are losing their own livelihood. There are some very fine executives running companies who make sure their employees are respected and, if the company does well, the annual bonuses will be spread among all the workers.

It’s one of the most tone deaf moves they could be making at this time. It follows the completely horrendous situation that small neighborhood businesses are in. Many of them are destroyed, which will lead to many more problems with families who have built their dream and put all they had into these businesses. The reality is that the government funds that were supposed to bail them out ended up going to major chains, lobbyists and private equity!
Workers at Macy’s, J.C. Penney and Neiman Marcus should move to a retailer that is fair to their workers.

Thanking employees for their “hard work and dedication” while giving them virtually nothing while their “leaders” continue to sit at the banquet table is the financial equivalent of politicians offering nothing but “thoughts and prayers” to folks who are suffering and dying.

Sure there are “contracts” and executives can legally insist they be honored no matter the circumstances. Or they could honor their hard working and dedicated employees by sharing at least some of the bounty. To whom much is given, much is required.

Not to throw shade, but well-run companies don’t do this.

Your company is flailing and/or dying, you’re laying off thousands of frontline workers, eliminating thousands of corporate jobs, so what’s your brilliant action to turn around the business? Pay your top executives millions in bonuses? Talk about tone-deaf optics – it’s just bad and there’s no way to rationalize it. These acts really cause people to ask, where is the oversight from the boards? Sure these payouts are almost certainly coming from contractually bound terms arrived at when those execs were hired, but a little bit of common sense goes a long way. At a minimum, if you’re filing Chapter 11, come up with a way to defer those bonuses until after the turnaround. Then optically, it would look like rewarding good leadership. Paying them out now is the opposite of good oversight and decision making. It’s no wonder many of these retailers are talked about as having poor leadership when it comes to customer-facing aspects of their business when these are the sort of decisions being made in the boardroom.

As noted, it’s not an issue related solely to retail. However it sends a clear message to “essential” workers that they may not be so essential. If the rule of thumb for determining a bonus is to ask, did these executives materially help to improve the earnings of their respective companies, in this case the answer appears to be “no” across the board.

This is an ethical rather than a legal issue. While these payments may not violate any laws, it does not mean that ethics and the law share the same inflection point. Ethics should occupy the space above the legal limits.

A smart C-suite executive who is already well compensated would pause his or her bonus even if it was performance based or contractually driven. This would send a supportive message to the remaining workforce, even on a furlough, that “we’re all in this together.” And perhaps the money going toward executive bonuses could be redeployed toward an extra month of insurance coverage, etc.

Retention bonuses make some sense in challenging situations like these, to make sure that capable executives keep the ship afloat. But most of the examples in this article really do look like bad optics or tone-deafness.

Money not left on the table is absolutely a squandered messaging opportunity: If you’re given lemons, make lemonade, not vinegar … to throw in someone’s face.

We’re all in this together — right? Taking care of each other in tough time. What’s happened here is the symbol of much that is wrong in our me, me, me culture.

It looks bad. It feels bad. And that’s because it is bad. In many cases the bonuses are just not deserved. Macy’s is a prime example: being blunt, it is a badly managed retailer where the executive suite is unable to innovate or guide the company to a sustainable future. That in itself damages the prospects for employees, but it adds insult to injury to see people at the top being rewarded for it.

Well, no need to wonder why they’re struggling. Associates are the life blood of a company, not the fodder that holds up top executives. According to Starbucks’ Kevin Johnson, associates’ and customers’ health was their number one priority, duh, so they paid their workers even during the shutdown and supplied masks and necessary PPE when open — I guess that’s not so “duh,” apparently. P.S.: Starbucks is NOT struggling.

This is outrageous. Trying to argue you deserve bonuses while laying off workers because your leadership failed the brand shows what poor leaders these people are. Bankrupt in many ways.

Leadership means setting an example, not a double standard.

The leaders of these companies, and their boards, are worse than tone deaf or simply guilty of bad optics, they are aggressively running their once relevant (that’s gracious to J.C. Penney) businesses into the ground. Which is where they all belong. As bad as it is (was) to shop these stores, it’s clearly worse to work there (except for the C-suite). And those two experiences are but one factor explaining why these brands are and should be history.