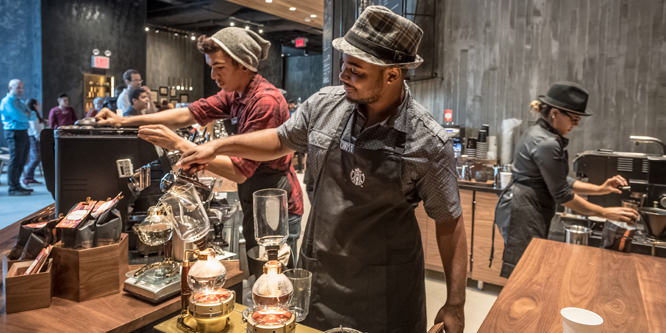 Retailers are always looking for new ways to expand product variety and refresh selection. But Starbucks may be unique in looking behind the counter for new drink ideas — with its own baristas.

For its promotion, running from October 20 to October 23, Starbucks locations are featuring drinks thought up by baristas themselves, called “Barista Originals,” according to The Motley Fool. The drinks will be made only of ingredients normally available for use in-store, but beyond that there are no limitations to what the barista can put together.

Secret menus can cause frustration for chain restaurant employees, though, as they are not always familiar with the concept and will sometimes refuse to make the items. However, with Starbucks in particular, baristas sometimes post images of their own dreamt-up concoctions — or of ones based on the requests of fellow users — on websites like Reddit.

While Starbucks has not confirmed if any of the Barista Originals will make it into regular rotation, it’s clear the company is looking to move beyond its familiar menu offerings. Starbucks recently debuted its first coffee-based cocktail. The Espresso Cloud IPA combines beer and espresso and is available in select locations, reports Self.

While Starbucks looks to its own people for ideas about what goes on the menu, other companies have recently gone off the beaten path in search of new product ideas.

IKEA, for instance, recently ran a promotion in which it asked young children to send in drawings of imaginary beings. Ten winners had their designs made into real-life plush toys that will appear in the bins at IKEA.

Target, in an effort to get new and interesting tech-forward products on the shelf, recently ran a startup accelerator. And Walmart has recently gone outside of traditional channels for product ideas with an Open Call pitch day for entrepreneurs.

DISCUSSION QUESTIONS: Is the “Barista Originals” promotion likely to push customers towards trying out new, more expensive beverages at Starbucks? Can other retailers and foodservice operators benefit from encouraging this type of on-the-clock artistry among their staff?

Please practice The RetailWire Golden Rule when submitting your comments.
Braintrust
"This is a great way to inspire employees and value their representation as brand ambassadors."

"Perhaps Starbucks offers (or should) a free replacement with a regular drink if the customer spits the “special” out?"

"I give all due credit to Starbucks for letting baristas have some leeway in surprising and delighting shoppers."

Starbucks customers accept and appreciate the creativity of “their passion.” So this fits for Starbucks. But who approves the drink or says if it is even any good? Leaving this to the barista (my guess) might be OK for Starbucks. And their customers will probably forgive them if they roll the dice on a “barista special” and really don’t like it. Perhaps Starbucks offers (or should) a free replacement with a regular drink if the customer spits the “special” out?

I don’t think this is a good idea for most fast casual chains though. And certainly not for QSRs.

The “mash-up” trend continues to have value to consumers seeking unique experiences. I give all due credit to Starbucks for letting baristas have some leeway in surprising and delighting shoppers — it’s the secret sauce to success!

People love the unexpected and to be entertained, the store is a theatre, and this type of creativity is great for customers (innovation) and for Starbucks employees too (encouraging creativity). One of the most memorable restaurants I ever went to was a burger restaurant in Underground Atlanta where the waiters performed a singing routine round “New York” — it was so good I came back there often to let others have the delight when they started up. Lick Stores (a retailer selling connected products in Paris) has a monthly invitation to French tech startups to show off their latest products. Customers love the variety, startups get a chance to market their products, and Lick gets to see if the product has potential to be sold. All winners, and it makes the store a destination.

Braintrust
"This is a great way to inspire employees and value their representation as brand ambassadors."

"Perhaps Starbucks offers (or should) a free replacement with a regular drink if the customer spits the “special” out?"

"I give all due credit to Starbucks for letting baristas have some leeway in surprising and delighting shoppers."