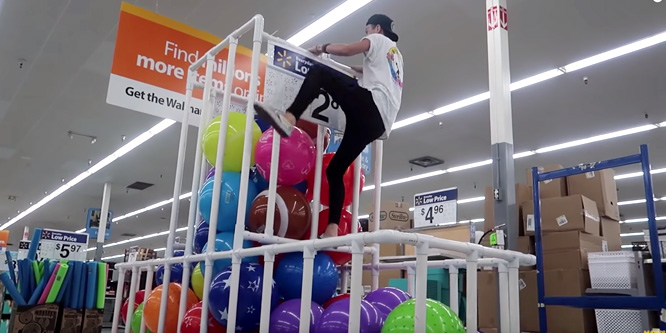 Difficult customers are nothing new, but social media creators are now seeking to cause trouble in retail stores for the purpose of getting attention on YouTube and other social media outlets.

Pranks include tipping over large merchandise displays (clearly ruining product), turning out the lights, announcing “sales” over the store’s intercom and confronting employees, according to reports from Business Insider and CBS News.

In one case, a YouTuber with over a million subscribers posed as a Walmart store manager, and proceeded to “fire” employees, causing obvious distress.

One prankster noted that the crazier the video, the more views it will get, providing the incentive to do more mayhem. He also explained that he doesn’t feel badly about making such videos because he views them as providing entertainment for subscribers to his channel.

Some videos receive over a million clicks, and the producers are apparently making money off ads and merchandise they sell. One prankster specializes in getting kicked out of McDonald’s with stunts such as yelling at employees and customers through a megaphone or claiming there is a foreign object in his food. He has received letters from the legal department at McDonald’s but still posts videos encouraging others to see how quickly they can get kicked out of the fast food chain. (The record appears to be seven seconds).

In even more serious cases, pranksters have called Burger King restaurants, telling employees that there is a gas leak, causing employees to break out the restaurant’s windows.

One 15-year-old poster noted that he can continue with his pranks until he turns 18 or 21 without really getting into trouble.

Much like younger offenders caught shoplifting, store managers seems to have three options: issuing a strong warning, alerting the child’s parents or calling the police and fully prosecuting. But, many understaffed retailers are unequipped to handle pranksters and aren’t able to respond quickly enough. The mayhem can cause annoyance and distress for customers and, in some cases, reduce employees to tears.

DISCUSSION QUESTIONS: How should retailers deal with pranksters without violating their rights and potentially making matters worse on social media? How should they prepare their staff for such incidents?

Please practice The RetailWire Golden Rule when submitting your comments.
Braintrust
"As a baseline, retailers need to prepare their teams for everyday scenarios and the unexpected."

"A 15-year old might skate on criminal mischief, but highly publicized stories about civil judgments could have a chilling effect on bad behavior."

"Why should the retailer, its employees and shoppers have to put up with this nonsense?"

20 Comments on "Social media antics cause grief at Walmart, Target, Home Depot, others"

There is no such thing as a right to run amok on someone else’s private property. In my opinion the police should be called and full prosecution brought. This is not a matter of what it looks like on social media, it is a matter of decency and fairness. Running a retail operation is hard enough without the job of front line staff being made more difficult by imbeciles who have nothing better to do.

Yes, I can’t believe anyone thinks there are rights involved. This is plain and simple disorderly conduct and more. For my 2 cents.

Amen! I’m sick and tired of the implicit extortion of pandering to the infantilism of “social media.”

These aren’t “pranks.” They are disorderly conduct at best. Perhaps a few days in the pokey will calm the desire to act like a jerk.

Call the cops. This is outrageous. Employees have enough fear of being shot without “pranksters” doing it all as a joke.

One kid said, “There is no ill intent when I create content like this; it is strictly for entertainment purposes.” Uh, huh. It’s not entertaining for customers or the people who work in the stores and restaurants. They get away with it because they are under 18. We need new laws to cover this kind of social media idiocy.

We live in a society where morons who want their 15 minutes of fame can successfully become YouTube stars by sabotaging these stores, and for the most part they are getting away with it because the retailers don’t want backlash from other morons, who will write horrible social media rants against them. Until they arrest and throw these folks in jail it will only get worse. The media treats these fools as heroes since they are going after big stores, but it trickles down even to my store. I have seen some horrible behavior by customers in small restaurants, sporting goods stores, and shoe stores. They will make ridiculous demands in front of everyone until the owner caves in, in order to prevent them from making a scene. I personally handle folks who act this way, and they are asked to leave if they start causing a scene. It is the ugly underbelly of the retail business. They become more emboldened in their behavior if their YouTube site gets thumbs ups from their fan base.… Read more »
7
|
0
-   Share

As a baseline, retailers need to prepare their teams for everyday scenarios and the unexpected — that means documenting best practices and engaging in role playing exercises and continuous training. Store teams are vulnerable to the bad behavior of anyone who chooses to enter their stores. When dealing with hooligans and criminals, or when in doubt, store teams should know management encourages them to call the authorities.

I agree with all who have commented that this is unacceptable, and the perpetrators should be held accountable. While I am not sure of the legalities involved perhaps holding the parents responsible would curb this irresponsible behavior. I admit I find it hard to believe that if their child is a YouTube sensation that they have no idea of what they are doing.

This is no laughing matter, and retail associates need to be protected and know that they are working in a safe environment. Not only is the job of a retail associate one of the more stressful ones out there, to deal with these sorts of threats is completely unacceptable.

Viral tweets and now posts on TikTok have their place. However this crosses a line that borders on criminal intent.

This is dangerous behavior for retailers not to prosecute. Where were the parents over the past 15 years? Behavior like this makes the world less safe for all of us. If this is OK in the stores, what is next? A shopper having a heart attack or a shopper pulling a concealed weapon? I wonder what the parents will say then about “poor Johnny” who was only out for some good old-fashioned fun. Sad and completely ridiculous for retailers to enable this by not prosecuting. I feel sorry for retailers. This behavior is beyond the pale.

The first thing I thought of was opportunity. First, as popular as this “pranking” (if you want to call it that) seems to be, it’s obviously wrong to do anything that can hurt a person or the organization. However a spoof for entertainment purposes that uses actors (friends) and a set (a garage, parking lot, etc.), well that can be fun. At a high level, think of the Seinfeld episode where Jerry tries to rent a car. “You know how to take the reservation, you just don’t know how to hold the reservation.” And if it’s kids having fun, it can showcase some real talent – either creative, cinematic, or both. That’s the kind of creativity that can land a job at an agency, studio, etc.

If these kids want to shoot edgy videos at a department store for social media they need to go through the right channels. I’m sure if their following is large enough, many retailers would be more than willing to create an official set after hours.

As is, this sounds like a law enforcement issue. Retailers should prepare their staff to quietly call law enforcement, which should be trained to enforce a specific and strong penalty for these antics – especially in cases where their property is being destroyed.

Meanwhile, my wife (a teacher) reviewed her district’s updated shooter training and lockdown procedures for the new school year with me last night. If chain stores don’t already have well-documented and well-practiced anti-terror measures, then incidents like these should never go viral – police should have been called at once, lockdown implemented, perpetrator arrested and prosecuted. Until guns aren’t a problem, you have to assume the next time it WILL be someone with a gun.

Unfortunately, this is another sad symptom of today’s society. Children may receive their first phone when they are seven and first social media account when they are 10 years old. By the time that they are 15, they have hundreds of followers and their online followers are more important to them than other folks in the physical world. The 15-year-old is obviously self-centered and has no empathy about the impact of his actions.

Suggestions for retailers may include:

This is such BS and yet another dark side of social media. Every time this happens and the police or fire departments are called, it takes them away from actual emergencies and these idiots should be locked up and treated as adults. Why should the retailer, its employees and shoppers have to put up with this nonsense?

I believe this really got elevated with the customer opening a tub of Blue Bell Ice Cream in Texas, licking it, and putting it back on the shelf, some months back. Lots of copycats after that — who can post the better vid online so all can see?

I have a big issue with tampering with the food supply. Anyone doing it, along with the people discussed in the article should be prosecuted to the fullest extent of the law. No examples — make it the rule.

Wow this really brings out the “old man” knee jerk response in me. While a criminal prosecution crackdown on pranking behavior might sound tempting, I’d prefer to see affected retailers pursue a civil route.

Why not sue the perpetrators for the economic damage caused by the prank? Demand treble damages, since the actions are willful, planned attempts to profit at the retailer’s expense.

A 15-year old might skate on criminal mischief, but highly publicized stories about civil judgments could have a chilling effect on bad behavior. Actions should have consequences. Go after their YouTube profits.

These really aren’t “pranks” in the traditional “Leave it to Beaver” sense. They’re a form of terrorism. Prosecute their little ##### to the full extent possible — and certainly seek civil damages against the parents if those involved are minors. Social media reaction be damned.

Given that such “pranks” are dangerous to their customers, their employees, and the perpetrators, I’d advocate for taking a hard line on this activity … before someone gets hurt.

Braintrust
"As a baseline, retailers need to prepare their teams for everyday scenarios and the unexpected."

"A 15-year old might skate on criminal mischief, but highly publicized stories about civil judgments could have a chilling effect on bad behavior."

"Why should the retailer, its employees and shoppers have to put up with this nonsense?"