Should Trader Joe’s have gone public with COVID-19 rates? 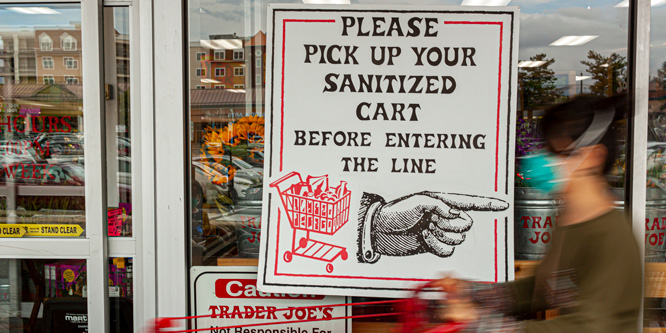 In light of recent media stories discussing the number of positive COVID-19 cases at grocers, Trader Joe’s said in a statement it believes “it is important to our Crew Members and customers to share and understand” what Trader Joe’s has experienced.

CNN reported last week on a university study that found 20 percent of 104 workers at an unidentified Boston grocer in May had tested positive. In late August, the United Food and Commercial Workers (UFCW) reported that, among its membership, 103 grocery workers had died from the virus and more than 14,300 have been infected or exposed.

Trader Joe’s said its infection rates in “virtually all areas are below the average rates of positive cases in each community where we have stores.”

Some of Trader Joe’s employees have attempted to unionize amid increasingly stressful (and in some cases, dangerous) work demands brought on by the coronavirus pandemic. The grocer in late March faced calls for a boycott over risky working conditions amid a unionization effort, but hazard pay and in-store safety measures quieted the campaign.

Retailers for the most part are not publicizing COVID-19 infections of associates. Walmart is among those citing medical privacy laws for not disclosing such information. In May, The Washington Post reported on employees at more than 30 grocers who contended that their companies were failing to disclose infection numbers and deaths even internally to store associates.

Target recently said in a statement to the Minneapolis Star Tribune that its employees’ “cases rise and fall in line with national trends.” Management is alerting associates as part of its transparency efforts. Target said in a statement, “We’ll continue to be transparent with our team and share the steps we take after learning about a positive case.”

Amazon.com earned national headlines in early October after disclosing that nearly 20,000 employees, including those at Whole Foods, had tested positive or been presumed positive for the virus this year.

DISCUSSION QUESTIONS: Was Trader Joe’s decision to reveal its COVID-19 infection rates and deaths shrewd or excessive? Is such transparency less critical for customers than for store associates?

Please practice The RetailWire Golden Rule when submitting your comments.
Braintrust
"As one of the few chains without an e-commerce option they need to be successful in keeping their stores safe. Their efforts have paid off and the public should be aware of it"

"Did Trader Joe’s think it would be a competitive advantage? “Hey, look shoppers. We’re transparent and the grocers nearby are not.”"

"I suppose transparency is good, but it does scare me if not done correctly."

21 Comments on "Should Trader Joe’s have gone public with COVID-19 rates?"

Yes. They are a brand built on authenticity and transparency. To help get customers to not minimize the pandemic, this should help them understand it is everywhere. More retailers should do it.

The public appreciates transparency. I think it definitely was the right thing to do.

While transparency is good, it is even more important to be relevant, useful and contextual. Here, from a customer standpoint, the absolute number doesn’t mean much – except for the most geeky nerds, no one keeps tabs on what rates are currently prevalent for infections rates, recovery rates, etc. Trader Joe’s numbers are better than the averages in the communities — but by how much? Are they better or worse than the other grocery stores in the areas? Does it even matter?

More useful would be to provide transparency on the protocols they are following; sharing information on any COVID-19 related incidents they had in their stores.

It is good to be transparent and to present facts. I think this will do more good than harm for Trader Joe’s.

Transparency is welcomed by the shopping public. This step appears to have been done with careful thought and concern, rather than a humblebrag.

I think it’s great that Trader Joe’s is this transparent. Beyond the life changes we all have experienced so far, COVID-19 is hitting home for me as friends and family across the country are reporting they have the virus. I want to visit places where I feel safe.

Trader Joe’s sharing its statistics shows consumers that the chain is working hard on behalf of them and the store employees to keep everyone safe. On the other hand, I am not so sure I want to hear the infection rates at some of the stores I have visited lately. Safety precautions are not as visible as they were and should continue to be.

It was the right thing to do for Trader Joe’s to reveal its COVID-19 infection rates and they probably should have done it sooner or at least followed the lead of Target by reporting that “its employees’ cases rise and fall in line with national trends.” While the number looks bad, it is truly average based on national trends. Transparency is the best policy.

The statistics and facts are in the public mainstream. To think that there aren’t front line retail workers in those 100,000 positive tests per day is naive. Shoppers want and expect transparency. By informing their shoppers, Trader Joe’s is letting them know that they are mindful and keeping their employees and shoppers as safe and informed as possible.

According to a customer loyalty engagement index, consumer expectations for trust increased across all product and service categories and brands by an average of 250 percent year-over-year. One key method of building trust is to be forthcoming and transparent as a brand from the very first consumer interaction. Trader Joe’s made the right decision to reveal its COVID-19 infection rates to ensure transparency and maintain/build trust with its customers.

The question is did Trader Joe’s overshare in its efforts to be transparent? My short answer is no.

I suppose transparency is good, but it does scare me if not done correctly. And I believe it will scare some customers, even though they certainly already know the risks. However I would never want to share numbers of deaths. On the other side of the coin, I would definitely share the news that their infections rates are below national averages.

Trader Joe’s made the right decision to share the COVID-19 infection reporting. They have done an outstanding job keeping carts clean, monitoring the number of people in the stores, and trying to configure the store to maintain social distancing. As one of the few chains without an e-commerce option, they need to be successful in keeping their stores safe. Their efforts have paid off and the public should be aware of it.

The real question is, why did Trader Joe’s come forward with such an announcement?
I imagine it could be, “Hey, look shoppers! We are fully transparent. Nothing to hide here.” And I guess that is a good thing. But…

Did Trader Joe’s think it would be a competitive advantage? “Hey, look shoppers. We’re transparent and the grocers nearby are not.” Maybe. But that just creates suspicion in the minds of non-Trader Joe’s shoppers. “Why isn’t my store more transparent? Maybe I should shop at Trader Joe’s.”

The sentiment from the BrainTrust seems very consistent and I strongly agree. Transparency in these times trumps everything.

I will add another thought. We have discussed several times the issue of confrontations with shoppers who refuse to wear masks and the responsibilities of associates in such situations. If every retailer posted updates of cases and deaths on a per-store bases, perhaps the “no mask for me” argument will melt away.

Great move by Trader Joe’s. They have just raised the bar for the rest of the grocery industry and also for retailers and other groups in general.

It’s just smart. Transparency is the new black in retail so, good job TJ’s. Meanwhile, at my Whole Foods, the employees and neighborhood friends are the ones that tell me what their C-19 count has been, and although they’ve been pretty good about safety, it’d be nice to hear from them directly about infections, just to put us customers at ease and to quell rumors that might get out of their control altogether.

I’ll have to vote “no” on this. I’m a little unclear on what the purpose (even) was, but whatever it was, it seems like a privacy violation. No one was actually named, of course, but it still seems like an unnecessary step on that slippery slope that separates the public’s “right to know” from “nobody’s damn business.”

Transparency with the virus is absolutely critical. Disclosing store infections will no doubt scare some shoppers in the near-term. But, it’s also important to highlight the risk retail workers are taking and the importance of all shoppers and employees to wear masks and follow all safety precautions.

Yes, no doubt that consumers value this level of transparency during the pandemic. Customers want to know what retailers are doing to protect employees and they want to know how successful those protections are or are not. It’s about building trust with your customers, and this was a good move by Trader Joe’s that more retailers should adopt.

It was the right decision. Imagine if the information was released by another entity? Or by employees?

The information is as critical to the store associates as it is to consumers. A lot of TJ’s stores are small — claustrophobically tight and crowded during the holidays. Right now, retail stores that have been pro-active and transparent are getting rewarded by consumers who are willing to adopt new shopping behaviors for their safety. The pandemic is far from over — common sense will prevail.

Braintrust
"As one of the few chains without an e-commerce option they need to be successful in keeping their stores safe. Their efforts have paid off and the public should be aware of it"

"Did Trader Joe’s think it would be a competitive advantage? “Hey, look shoppers. We’re transparent and the grocers nearby are not.”"

"I suppose transparency is good, but it does scare me if not done correctly."