Should the Marlboro Man be vaping? 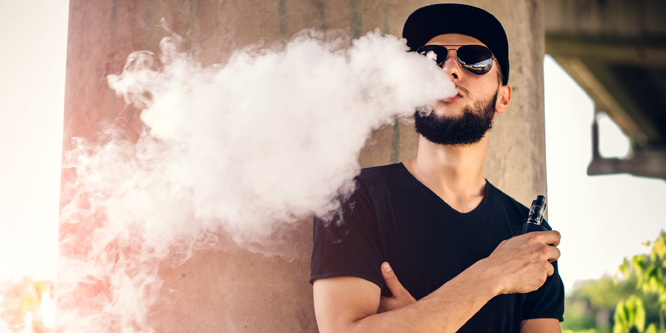 In a deal steeped in conflicts, Altria, the largest tobacco company in the U.S., on Thursday closed on a massive investment in Juul, the U.S. leader in e-vapor that has vowed to make cigarettes obsolete.

At the same time, the stake provides a major foothold in the fastest-growing segment of the nicotine market. Said Howard Willard, Altria’s CEO, in a statement, “We are taking significant action to prepare for a future where adult smokers overwhelmingly choose non-combustible products over cigarettes.”

With a services agreement, Juul gains access to prime shelf space at retail next to combustible cigarettes and opportunities for messaging inside cigarette packs and through mailings to adult smokers via Altria’s databases. Juul will have options to tap Altria’s sales organization that reaches 230,000 retail locations.

The deal was announced two days after the U.S. Surgeon General declared e-cigarette use by youth an ”epidemic,” carrying risks of driving lifetime addiction to nicotine. The FDA has threatened a ban on the devices if youth use can’t be curbed.

Juul has said its goal is to help adult smokers quit with a tobacco-free source, and both Altria and Juul said they were committed to preventing youth from using any tobacco products. Juul has already pulled flavored products from stores, enhanced age-verification online and eliminated social media accounts as part of the effort.

Some critics charge, however, that Altria’s marketing and distribution machine could pose much bigger challenges to the battle against teenage vape addiction. More worries were heard over potential lobbying efforts. Altria could steer Juul away from supporting efforts that impact traditional cigarettes, such as a proposal to reduce the nicotine levels in cigarettes.

DISCUSSION QUESTIONS: How do you see Altria’s investment in Juul affecting the vaping category? Do you expect the move to stir up stricter regulatory efforts? How should retailers manage this controversial category?

Please practice The RetailWire Golden Rule when submitting your comments.
Braintrust
"It’s hard to talk about promoting health on the one hand and selling nicotine delivery systems on the other."

"I think Juul understands that their storyline of being a positive alternative to smoking traditional cigarettes has run its course with the American public..."

"What Juul did was reposition the competition in the consumer’s mindset. Instead of looking like a cigarette it resembled a USB storage device."

10 Comments on "Should the Marlboro Man be vaping?"

Clearly, the investment will boost the vaping category, if the government doesn’t shut it down first. Vaping is just another path to nicotine addiction and nicotine addiction costs this country a small fortune every year both in dollars and, more importantly, lives. Retailers are free to manage the tobacco category anyway they want, but I for one salute companies like CVS that put their lost sales where their principles are by not stocking any tobacco products. Retailers have to pick their fights and their go-to-marketing strategies, but it’s hard to talk about promoting health on the one hand and selling nicotine delivery systems on the other. We can pretend that vaping is harmless in the same way we pretended smoking was “good” for people, but it doesn’t change the medical facts. Caveat emptor? Sure … but let’s make sure retailers — and consumers — have their eyes wide open when they opt to stock and use vaping products. Retailers should be free to sell any legal product they want, but just because you can doesn’t… Read more »
3
|
0
-   Share

Business is business. This is a perfect acquisition for Altria, as was the acquisition of buying pot company Cronos.

I think Juul understands that their storyline of being a positive alternative to smoking traditional cigarettes has run its course with the American public and their foothold has been strongly established so they can at least somewhat acknowledge what they really are — an addiction replacement for the 21st century. (Plus getting a $38 billion valuation certainly doesn’t hurt). Even if regulatory efforts become stricter, I don’t think it will adversely effect Juul’s sales. Older generations won’t be impacted by the laws and it will only add to the allure of the product for the younger generation.

All true, Evan, but kind of sad, don’t you think, when companies toss away their core principles when because is on the table? Imagine if REI sold out to an oil company with a goal of using the retailer’s brand cred to support efforts to buy up public wilderness land for development? Would REI just say, “Well, hey, after all, money is money”?

Absolutely, but I would argue that Juul’s core values never really included “stopping the spread of teen (or any other addiction)”, so they aren’t betraying their platform. They simply found a new way to wrap a parallel product.

This discussion is particularly difficult for me. Yes, I have continued to enjoy cigars and pipe smoking while society around has chosen a puritanical response — hating the smoker. We kick smokers outside, out of airports, out of all public places when we kick out smoking.

All this has been done for “morally good” reasons. But societies always drape harmful actions with morally good patinas — it’s quite common. We need always look at moral legislation with a cautious eye.

My recommendation: The medical community needs to stay on top of trends like vaping and e-cigarettes. It’s very easy for new technologies like these to give an apparent “free pass” by appearing to remove medical risks. But the rest of the world needs to take a pause on the exaggerated risks of fourth-hand smoke.

From a business point of view the investment makes sense. Altria had its own e-cigarette brands as did/do all the cigarettes companies. There were also other e-cigarette companies (far too many to count) vying for the vaping market. What Juul did was reposition the competition in the consumer’s mindset. Instead of looking like a cigarette it resembled a USB storage device. It had a cool visual appeal that the other did not. It quickly became the dominant vaping device with a reported 70 percent of the vaping market.

There has been and will be a lot of discussion of the harm reduction qualities of vaping versus smoking. Both deliver nicotine to the user. Smoking involves inhaling the smoke from burning tobacco. Vaping does not. I’m not a doctor but information I have read indicates that vaping does not involve the harm that inhaling smoke does. Are either good for you? No, but is one less harmful than the other? So far it appears that way.

Critics will never be satisfied. That’s integral to being a “critic,” so there will always be more regulation. Most retailers are “managing” it by getting out of it … probably a wise move if it’s only a sideline for them.

The vaping industry especially as it relates to tobacco vs cannabis has had a total free ride and now we have another generation who will have to fight being addicted to tobacco. From a business side it makes perfect sense that a big tobacco company should own a big and innovative vaping company. The brilliant marketing that vaping is not bad for you should now be clearly seen for what it is — great marketing and great product with specific target to get more people — and specifically kids — to increase their tobacco consumption.

Braintrust
"It’s hard to talk about promoting health on the one hand and selling nicotine delivery systems on the other."

"I think Juul understands that their storyline of being a positive alternative to smoking traditional cigarettes has run its course with the American public..."

"What Juul did was reposition the competition in the consumer’s mindset. Instead of looking like a cigarette it resembled a USB storage device."