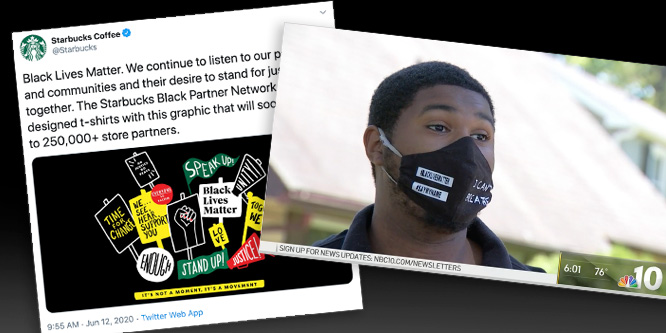 Everyone knows they are in Best Buy when they see a blue shirt associate or in Trader Joe’s when they come across crew members working in Hawaiian shirts. These images communicate a single, professional branding message to customers shopping in stores. That’s why retailers require uniform dress codes.

We are not, however, in normal times. The country is in the midst of continuing nationwide protests against racial inequality and abuses of power by police. Much of life, it sometimes seems, has been turned upside down by fear, grief and a longing for a new start that is more just and compassionate.

Associates, working on the frontline of retail, are not cut off from the events shaping society. In fact, it could be argued, they know better than most the pressures felt today. That’s why it is also not a surprise that workers, many of them younger, would want to in some way express their solidarity with causes, specifically Black Lives Matter (BLM), when events such as the police shooting of Rayshard Brooks in Atlanta continue to happen in America.

The decision by some associates at Starbucks and Wawa to wear BLM items has recently generated unwanted negative publicity for the two employers.

In Starbucks’ case, baristas were told that wearing BLM pins and shirts was not permissible on the job over concerns that doing so could be misinterpreted by some and lead to violence in shops.

As news of Starbucks’ policy spread, the coffee giant reconfirmed its commitment to racial equality and justice on social media. When that failed to assuage critics, Starbucks announced that it was changing its policy on BLM merchandise and, in fact, was producing 250,000 Starbucks-branded BLM t-shirts for baristas to wear.

An employee at a Wawa store in New Jersey recently left his job after he put on a facemask presented to him by a customer that included the phrases “Black Lives Matter,” “Say My Name” and “I Can’t Breathe.”

Andre Lynch III, 20, said he quit his job when his manager told him to put away the BLM mask and wear one provided by the store. The manager cited “everything that’s going on right now” as the reason.

Mr. Lynch said he had not received any complaints from customers during the two hours he wore the BLM mask. Wawa did, in fact, offer Mr. Lynch his job back the following day and reconfirmed its commitment to its “black associates and communities.”

A company spokesperson told NBC10, “We are currently working on ways through our diversity and inclusion efforts to enhance our uniform standards to enable our associates to express their support and we also will be posting signage in stores as part of that support.”

DISCUSSION QUESTIONS: Do you think that retail and restaurant employers should relax current dress codes to allow associates to display solidarity with the Black Lives Matter movement? What actions would you take as an employer to be clear in your stance on the goals being expressed in protests across the country?

Please practice The RetailWire Golden Rule when submitting your comments.
Braintrust
"This is a tough balance indeed."

"I believe retailers need to relax their dress codes during these extraordinary times."

"Once that slippery slope is open, the door is open to every cause. This is not, in my opinion, where retailers want to be."

This is a difficult situation for retailers, and the lawyers haven’t weighed in yet. If a retailer allows employees to wear BLM, is that a slippery slope to allowing other statements? Starbucks – after a false start – made what might be the best choice: providing company apparel that includes BLM messaging.

This is a difficult issue for retailers. While I see the wearing of pins and badges as broadly acceptable, if a retailer has a pre-existing uniform or dress-code then I do not think employees should be allowed to simply wear whatever they want – no matter what cause they are supporting.

This is a tough balance indeed. Brands serve their demographic. The NFL did not take the original protests from Colin Kaepernick well, and recently the NFL commissioner wished they had approached them differently. Nike and the NBA on the other hand embraced these full-on from get go.

Would they allow only BLM or supporting any other movements? If BLM is OK, to what extent? What messages are approved? What is the threshold of public consciousness that should be formed before allowing them?

This is a legal minefield that businesses would rather not step into. But every brand has to introspect, find their voice and stay true to that, because their customers are demanding they do.

I believe retailers need to relax their dress codes during these extraordinary times. This country has for too long allowed systemic racism to fester and it’s now time for a change. We need to rally for equality in the streets as well as in our stores.

The line, “I’m as mad as hell, and I’m not going to take this anymore!” as was said by Howard Beale in the movie Network, is the perfect corollary for our current milieu.

I am a staunch supporter of equality. But retailers should provide a brand uniform that all associates wear. Garments that make any other statement are not and should not be part of the working environment as they tend to politicize an entity that should not get involved in making public shows of support for any cause but their brand. What retailers should do is to embrace progress, hire minorities, train minorities, promote minorities and thus, show by their deeds and not clothing, that they understand, they are sensitive, and they are actually doing something about a problem.

Absolutely! I know we are in extraordinary times, however, once that slippery slope is open, the door is open to every cause. This is not, in my opinion, where retailers want to be. It brings with in new challenges that they may not be equipped to handle. For my 2 cents.

There are many causes out there, and picking one because the media thinks this is priority #1 is foolish for businesses. I can think of many noble causes that affect many people including children, which all need some attention as well, so for me I’ll keep our dress policy the same. Our good works with the charities we serve will continue, without any fanfare. We are not a national powerhouse company being pressured to support any cause. For me, local issues can be served much better.

This is a damned if you do and damned if you don’t situation. I do not think there is a universal right answer. Starbucks took a great approach to control what employees wore in their locations by providing a new form of uniform. I would be very concerned about simply allowing every employee to select what they might wear.

This isn’t just a social cause–this is a radical, critical issue happening right now. To allow employees to express their support and put the weight of their brand behind them matters. Starbucks has always been a cause-friendly company, and they’ve never been shy about it. Other brands that have always walked the line may have more backlash, but they make a big statement about who they are, what they believe in and what to expect of them with their action (or inaction).

It depends. Every organization needs to weigh the risks and rewards of speaking up on divisive topics. Brands like Nike spoke up against systemic bullying of their core audience. It was the right decision for Nike. Yet other companies deliberately remain neutral, even on the most inflammatory issues, and even when it makes sense to pick a side on egregious events and noble causes. That’s because these companies want to: Avoid controversy; Act as a united team; and Avoid alienating any segments of their audience or workforce. Beyond the corporate arena, their employees have every right to express their personal views as long as they leave their company out of the debate. Non-retail example: During their 2017 concert tour, the usually politically-fueled Irish rock band U2 remained uncharacteristically muted in their political expression. That’s because they have fans across the political spectrum and they didn’t want every concert to erupt into a riot. Divisiveness can be dangerous. Similarly, some retail companies I work with serve the entire country, so choosing a side on any controversial… Read more »
1
|
0
-   Share

The news no longer reports the news. The news attempts to create the news, and the internet has turned everyone into a reporter and a news source. If companies are going to stay ahead of the curve, they need to establish a policy that is neutral and stick with it, especially when it comes to employees expressing their beliefs on the job.

Since the default answer(s) — which cause(s)? slippery slope — have been taken, I’ll put out a strategic albeit perhaps cynical answer: businesses should allow, perhaps even endorse, employees “taking a stand” based on how they feel their customers will react. Disingenuous? You bet … unfortunately I think it’s a summary of how businesses often act.

No, no, no. If the retailer provides a “uniform” as a condition of work in the workplace, then individual dress is not an option for employees. When you check in for work, you are to wear the assigned clothing, not something which you have decided is appropriate. The consequences of individual “freedom of speech” being reflected in individual dress is not a component of the workplace in companies who have invested and developed a dress code for everyone to follow. Not adhering to this leaves open personal interpretation of individual clothes, what message it sends and the consequences of this. This results in chaotic messaging, rebellious dress and a mess for other employees to endure.

I tend to favor the idea of keeping politics/social policy out of the commercial space unless it is part of your brand. In the case of Starbucks, it very may well be part of their brand to support BLM. But any brand must consider the potential of alienating customers and employees who may not choose to wear the (in this case BLM) shirts or may have concerns of their own about one particular cause or group. Bob Amster (above) stated things very well, IMHO.

Braintrust
"This is a tough balance indeed."

"I believe retailers need to relax their dress codes during these extraordinary times."

"Once that slippery slope is open, the door is open to every cause. This is not, in my opinion, where retailers want to be."