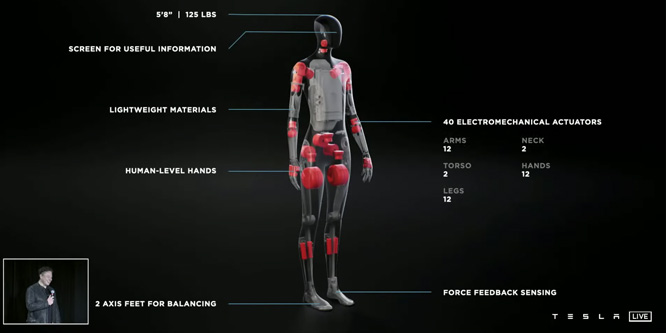 If some big names in the robotics world have their way, the robots we see working at retail may some day more closely resemble a human shelf-stocker, or even a Terminator, than the boxy robots currently rolling on sidewalks and in warehouses.

Tesla CEO Elon Musk announced that the electric car manufacturer plans to build a humanoid robot that is 5’ 8” tall, weighs 125 pounds, can carry 45 pounds and lift 150 pounds off the ground, Popular Science reported.  In a presentation widely shared online, Musk suggested that bipedal, humanoid robots represent the next obvious evolution in the technology at work in autonomous vehicles.

The potential retail applications for humanoid robots are numerous. Robots could lift bulky products off of shelves and carry them to a destination and perform tasks that require a human-level degree of dexterity but are too dangerous for humans to safely complete.

While the concept of robots carrying our grocery bags in their arms and walking them up the stairs for us may sound like science fiction, major developers in the robotics space have already taken strides in creating autonomous machines that move like people and animals instead of vehicles.

A recent video from Boston Dynamics demonstrating running and jumping robots on a parkour course demonstrates the degree to which this level of mobility has become possible, at least on the prototype level.

Robots capable of human-like or animal-like movement being used at retail or for delivery do, however, raise real questions about safety.

Wheeled sidewalk delivery robots have already experienced a great deal of back-and-forth from state and local governments trying to balance a desire for services with concerns over the potential risks for pedestrians.

Whether or not a robot the likes of which Musk and Co. are planning would prove to be a greater or lesser safety hazard than a wheeled vehicle depends on its physical capabilities, and how and where it would be used.

Anxieties over Boston Dynamics’ style of robots have already made their way into science fiction. A 2017 episode of the series Black Mirror depicts a robotic dog based on their designs.

DISCUSSION QUESTIONS: Do you see tasks like delivery, cleaning, etc. being handled in the medium- or long-term by humanoid robots rather than wheeled ones or delivery drones? What do you see emerging as the most efficient robotic solutions for delivery and in-store use at this point?

Please practice The RetailWire Golden Rule when submitting your comments.
Braintrust
"I have seen human-like robots at trade shows – pretty spooky. I don’t know if we are ready do that just yet…"

I can see the advantage of a humanoid form if it increases the range of movements and tasks a robot can undertake. After all, the human anatomy is very dexterous! However I don’t really see any point other than for increasing capability. Indeed, I would be more spooked at some kind of humanoid delivering goods to my home than a wheeled style robot. And perish the thought of having one of those creepy Boston Dynamics robo-dog things turn up at the door!

I’m always interested to try things! I am curious as to what these robots do, though. If interaction, I think I’d prefer to deal with a human. If it’s simple tasks like checking in or locating a store, I can do that on my app or via a kiosk, so don’t really need a robot.

Humanoid figures are totally unnecessary. The most efficient robotics solutions for delivery are: self-guidance, climbing and descending curbs, solar battery charge, the ability to carry a minimum wight of 50 pounds or so, and proper customer verification. No frills, just efficient.

I have seen human-like robots at trade shows – pretty spooky. I don’t know if we are ready do that just yet…

A lot of my perception about our future robot-enabled lives comes to me through Isaac Asimov and The Jetsons. In sci-fi, humanoid robots are a literary tool to anthropomorphize technology. This gives the characters and readers something to react to in a story. In real life robots are, and will be, designed based on the tasks that they’re going to perform. A Roomba doesn’t need a body, for example. A robot delivery vehicle doesn’t need a face, it needs advanced sensing capabilities to keep people around it safe and it needs a way to navigate an environment and hold products. That looks like a vehicle of some sort, most likely with wheels.

I sincerely doubt we’ll see humanoid robots used for many practical applications in the future. At least until Skynet goes live. [sic]

Human beings constantly anthropomorphize inanimate objects. We feel empathy for the bold and sassy dress that never gets worn, we straighten the sad-eyed doll that has fallen over on the shelf, we feel bad for the purple dinosaur dog toy with its head bitten off. Giving robots human characteristics will make it easier for us to understand how to share space and integrate them into our daily lives, but will also help to ensure we take care of them so they continue to function correctly. But as robot tech becomes more developed and mainstream, the inevitable demand for personalization will take over and we will have robots that match individual tastes — from Game of Thrones to Disney.

Robots are definitely going to be the big retail story of 2030. Until then, not so much.

Any machine form that completes its tasks properly is acceptable. The idea of a humanoid form in retail is unnecessary functionally and has more to do with perception and marketing. I will spare the (long) explanation of what the uncanny valley is and leave it at even hesitant people will accept the presence of humanoid robots after a desensitization process. The real issues are twofold: Elon Musk is brilliant in many ways and a hype machine in many others. Many of his comments about AI are ridiculous and likely mask a hidden agenda. Maybe he’ll come out with a robot as he describes, maybe not. If so, or if say Boston Dynamics offered something for retail, the price would be exorbitant. There is already pushback from people about job loss due to automation, which often results from robot utilization. Humanoid robots will enhance the pushback greatly. A floor mopping robot that looks like a mechanical assemblage is fodder enough. A humanoid robot doing the same job will overall generate very bad PR for any retailer… Read more »
0
|
0
-   Share

Who am I to argue with Elon Musk?

But will all robots become humanoid? No! It will be matter of the job or the need. There are certainly activities that require the dexterity of a human. In that case, one will see humanoid machines. But other robotic operations will need other skills, like in manufacturing, delivery, and cleaning.

Robots will be designed to do the job most efficiently, not to look like people unless it facilitates the job to be done. If it pours me a beer, I am all for it. But I don’t want a humanoid robot sitting in my self-driving car.

Actually I see humanoid robots, autonomous delivery robots and delivery drones all growing in use in retail over the next decade. In fact, all three are in use in retail right now. They are being used in types of disruptive retail that are innovative and technology driven. A few are succeeding, like Starship and their autonomous delivery robot. Others have failed, such as Pepper, the humanoid robot from Softbank. It was tested in various retail applications, even at the Mall of America, and failed to find a customer base. I hope Elon Musk’s version resonates with consumers and retailers in a more successful way. I think humanoid robots have a lot of potential.

I don’t think we’ll see humanoid robots take over the retail space any time soon. Yes, there is a lot testing out there, but Walmart kicked their version of a restocking robot to the curb in favor of good old-fashioned, hard working, living/breathing employees.

As I have said many times before, this is a slippery slope whether in supermarkets or elsewhere. Sure, there are short-term benefits that these humanoid robots could provide, like delivery and cleaning, etc. But long term?

Do we really want to deal with AI-equipped humanoid robots that are 100 times stronger than humans and a 1,000 times more intelligent? Why would they need humans anymore except maybe as pets. And they won’t be affected by Covid. I may be going slightly off the rails here, but maybe not.

Braintrust
"I have seen human-like robots at trade shows – pretty spooky. I don’t know if we are ready do that just yet…"

How likely are humanoid robots to be used in retail environments including stores and warehouses within the next 10 years?