Should C-suite execs keep their opinions to themselves on store visits? 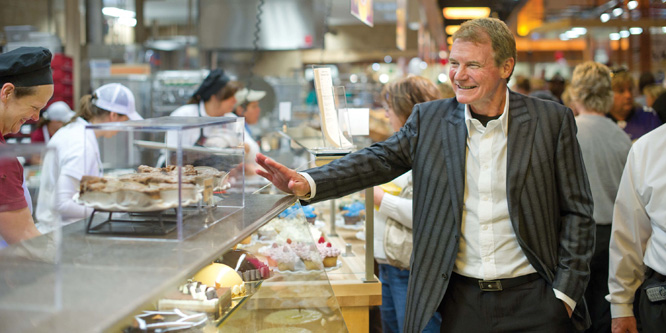 When Whole Foods CEO John Mackey makes a visit to one of his chain’s stores, he withholds criticism as much as possible and recommends that others in similar positions do the same.

Mr. Mackey told the Freakonomics podcast a single criticism from him could be devastating to store employee morale, even when given alongside 10 compliments, CNBC reports. He believes store staff see him as akin to a parental figure who they want to make happy because of his role as company founder and so he gives any store he visits, for the most part, nothing but praise. In his estimation, people only receive criticism well from people with whom they have built trust.

Surveys have found that, at the store manager level, serving as a role model is important, but offering feedback, holding teams accountable and avoiding condescension are likewise critical. Mr. Mackey’s role positions him differently with respect to the company; although he is the CEO/founder of the grocer, he no longer owns it. Whole Foods was acquired by Amazon in 2017.

Mr. Mackey has long been a frequently-quoted figure on matters of leadership and entrepreneurship due to Whole Foods’ success. In 2013, he co-wrote a book outlining the concept of “Conscious Capitalism,” which makes ideological room for social responsibility in the enterprise world. Such concepts have grown popular throughout the business world. The Business Roundtable recently introduced social responsibility as a central tenet, replacing Milton Friedman’s doctrine of focusing exclusively on building shareholder value.

Mr. Mackey has also proven to be controversial with public statements, sometimes appearing to be at odds with his avowed social consciousness. In 2010, he wrote an op-ed in The Wall Street Journal criticizing healthcare reform (which quoted Margaret Thatcher as an epigraph) and Whole Foods was forced to distance itself from his position on the topic.

In late-2019, reports revealed that Whole Foods intended to cut medical benefits for 1,900 employees who were working fewer than 30 hours a week, again raising the question of how conscious a capitalist Mr. Mackey is in reality.

DISCUSSION QUESTIONS: Do you agree with Mr. Mackey about the need to first establish trust with employees before giving criticism, and how can that be accomplished by figures in the upper echelons of a business? Are there times when a CEO or other C-suite member should break with Mr. Mackey’s advice and offer criticism to employees when visiting stores?

40 Comments on "Should C-suite execs keep their opinions to themselves on store visits?"

I believe that CEO and other C-suite executives can be far more effective by encouraging store level personnel than in being critical. They should use store visits as an opportunity to listen to what store personnel have to say and to get a real sense of what it’s like in the trenches. Good constructive feedback should always be welcomed, but keeping it positive and encouraging is the best policy.

On one hand it is critical for retail organizations to develop a resilient, feedback-oriented culture at all levels and roles within the business. On the other hand, if the C-suite is finding themselves critiquing in-store behavior, operations, or execution, they should look internally first, and then at the divisional retail heads, multi-site or district teams that they’ve employed.

During my department store days, I always encouraged the CEO to share the negatives with me because I was ultimately responsible for the store. It is true that if the CEO gives criticism to a staff member, it can be devastating to that member. I saw it as my responsibility to take the critical comments to my staff and ask them for their thoughts. I would hope that the CEO always would talk with staff members and ask their opinions as well as offering compliments on any aspect of the store. That built up a lot of staff members’ attitudes over the years.

If every time you see the boss you fear criticism, there is an obvious problem. I think back to Tom Peters when he talked about management walking around and getting involved with employees to the point where they look forward to seeing their boss/manager/leader. Store visits are an opportunity for the C-suite to connect with the front line and learn what they can’t from the head office.

The discussion suggests that the answer is black or white. It isn’t by far. The success or failure of criticism is all about how you do it.

Just imagine you are an associate who is stocking a shelf, checking out customers, laying out produce or building a sandwich. Now the CEO comes over to you and asks your name. You say “Mary.” The CEO says, “Mary, there might be a better way (or faster way or easier way) to do this. Why don’t you try it. If it helps you, great!”

If I am the associate, I am thrilled. Gee, the CEO of the company paid attention to me. The CEO cares about even the most lowly staff. When I was a lowly guy, umpteen decades ago, I welcomed such attention.

YES! The worst job in retail, I’ve always said, is being the store manager in the store closest to headquarters. And while we’re at it, extrapolating an out-of-stock or price issue at one store to the entire 1,700 store chain.

There is value in what Mr. Mackey suggests for a variety of reasons.

First, store visits are often so unrealistic, especially when they are expected. Stores generally never look better than when a senior executive is expected to visit.

Standards aside, what about when a store is performing poorly and yet looks impeccable from a merchandising standpoint?

Store standards are one thing and performance is another. Poor performance isn’t always a function of the store on its own but also should include what the buying/merchant teams are planning and allocating for the store. The converse, of course, is also true.

The issues that create the criticisms are typically created and/or controlled by management. Front line employees are typically meeting the lowest common denominator set by management. Management should engage and observe and view their stores as a reflection of themselves and their inspiration and expectations. Leading by example and encouragement is always more beneficial.

If every time you see the CEO it’s nothing more than “doing a heck of a job brownie” you are a PR celebrity. If CEOs really walked the aisle and really devoted 20 minutes to make a meaningful connection with floor workers, it would do far more good than harm. I know as a speaker and consultant I can shut people down quickly if I’m not careful but that doesn’t mean they want me to be Pollyanna either.

Surely hourly associates should be shielded from direct criticism coming from top management. You can even make the same argument for store managers (who are often well-compensated and not hourly employees) to avoid having them criticized in front of the teams they are trying to lead. But a certain amount of constructive criticism — even if it’s conducted behind closed doors at the level of district managers or higher — ought be welcomed as part of an effective company culture.

Generally speaking, praise in public and criticize in private is a good guideline to follow.

Secondly, when it is the CEO who finds issues that are so lacking they inspire a public lashing, it means the leaders below the CEO have failed at their job.

In some cases, the CEO is simply posturing for public consumption. Such an approach may be a show to recover from chronic customer perception issues, particularly when a CEO is brought in as a turnaround artist.

I do agree. I know how hard store employees work when they know “the boss” is coming.

It’s too deflating to criticize their efforts.

I mentioned the store managers at my family’s supermarkets and their onboarding efforts with new employees earlier this week. I’ll draw on another memory for this response. Whenever I went to the stores with my father or grandfather, one of the first things they’d do was bag groceries, often before talking with the managers. This accomplished two goals for them – interacting with the customers and showing the passion to the team members. For the workers and managers, this set up opportunities to give guidance that would be more readily accepted. And that word, guidance, as opposed to criticism, is really important. Guidance doesn’t have the negative connotation of criticism but delivers the same results.

Mackey understands that problems manifested in the store are seldom due to the store employees. They are typically the result of issues with root causes farther up the management chain. I’m reminded of a sales communications analysis we were asked to do by a top three (at the time) U.S. food company. The sales team was complaining of being hampered by multiple communications on various issues from HQ, all of which demanded some kind of action. Our field audit revealed that was true. But unlike the attribution of cause, which the sales people wisely laid at the feet of marketing — 40 percent of the communication originated from the president of sales’ office. The sales VP who had commissioned the project promptly paid us and then buried the results.

When CEOs visit stores it should be to listen and learn. Give frontline folks a chance and they will offer insights of great value – but one misplaced comment from leadership will slam the door on open communication.

That said, if a store visit reveals egregious errors or unsafe practices, a C-suite executive needs to speak up in the moment. Establishing trust first can make employees willing to apply prompt, constructive feedback to continuously improve and grow.

C-suite executives ought to visit stores to instill confidence in their associates and not to create fear. The executives have inherent organizational powers, and their actions reflect and communicate the company’s normative values.

The idea of the store as a battlefield which the CEO visits to inspect the troops and equipment going into battle is not only arcane and dangerous; it reinforces the artificial separation of the mind, heart, and hands. The organizational culture is the ultimate differentiator for any company, especially consumer-facing ones.

The store visits are opportunities for the C-suite executives to learn, reinforce the good, and take note of improvement opportunities. These visits form new input for constructive discussions in the C-suite that include fresh initiatives and organizational learnings.

I do think that a single throwaway comment by a C-level executive can devastate a store associate; I have seen it happen. During my department store career the most anticipated days were when the buyers and execs from the home office visited the store. They were not hyper critical to the store associates, negative comments were saved for department heads and the store manager. Interaction with frontline associates focused on helping associates better understand how to sell and merchandise product.

I’m not sure if it is still happening, but the CEO of The Container Store used to work on the sales floor alongside the associates for a week or two at a time. That’s how you build trust.