Shoppers find better deals on markdown than in outlets 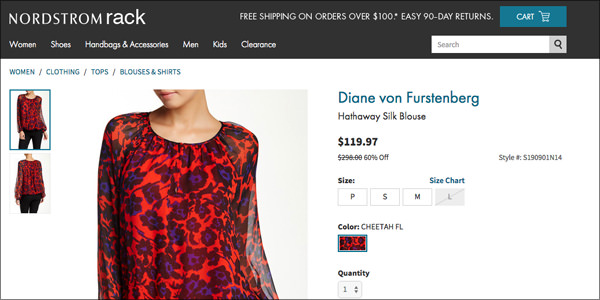 One of the arguments in favor of a retailer pursuing an off-price or outlet strategy is to help get marked down inventory off the floors of flagship stores. Another plus, according to a new study by Haynes & Co., is that the very same items sold at a markdown in flagships are priced higher in outlets. In short, a retailer can make more selling the item in its outlet. What’s not to like about that?

Store audits by Haynes, as reported by The Wall Street Journal, found numerous instances in which consumers spent more on an item shopping in an outlet than on markdown. For example, the consulting firm found that, over one weekend in February, prices at American Eagle Outfitter’s stores were cheaper 43 percent of the time than at its outlets.

This is not the first time a report has shown that consumers may not be getting the deals they expect when visiting an off-price store or factory outlet. Articles with a similar slant have been written for years by major newspapers and magazines, but the numbers of people shopping in outlets continues to grow. Macy’s decision, for example, to pursue its own off-price concept, Backstage, which will launch with four stores this fall, has been attributed to the success of Nordstrom Rack.

Most consumers do in fact head to outlets looking for a deal. According to a 2014 Consumer Reports survey, 34 percent believe outlet prices are much lower than the sale prices at regular stores. Sixty-four percent believe that their trips result in them getting "great value" for their purchases. Bon Worth, L.L.Bean, Haggar, OshKosh B’gosh and Izod were named by respondents as stores offering the best deals.

Some consumers, however, are losing some of their love for outlets. According to City Research, via the Journal, nearly one-third of consumers who previously only shopped at outlets are now shopping in full-price stores, as well.

Should there be a concern that retailers have overplayed their hands when it comes to outlets? Is there a formula for retailers to determine the right pricing balance between their flagships and outlets?

Please practice The RetailWire Golden Rule when submitting your comments.
Braintrust
"There are times when retailers do know what they are doing. This might be one of those instances. Most savvy shoppers know where the best bargains are. In some cases the shopper might know they can get the same item for less at the outlet store. But factoring in the time and cost of travel is it really worth it?"

Outlets started out as places where retailers could ship the merchandise that hadn’t been sold at their regular stores. The pricing was portrayed as better than you could get at the retailer’s regular store even when the items were on sale.

Then came the concept of developing items designed especially for the outlet class of trade. These items were generally of a lower quality. While this was initially done by for brands that operated their own outlets, the consumers have caught on to this and it has raised doubts about much of the merchandise available at outlet stores.

Add to this the rising understanding that the price at the “full-price” store may decrease and you will get a shift in consumer purchasing habits.

Savvy shoppers have know for years that outlets don’t consistently offer the lowest prices, yet mainstream shoppers don’t seem to care. Part of the reason may be the treasure hunt nature of outlets. One never knows what might be for sale. Retailers recognize this and have priced their goods accordingly. In an ideal world outlets would be lower priced than flagships, but things are rarely ideal.

At last the truth comes out. My family gave up on the myth of outlet shopping a long time ago. Personally I’ve never understood the appeal.

Also in the Consumer Reports study: “Many manufacturers will make items specifically for their outlet stores, designed with fewer finishes or less expensive material than their retail offerings.” More myth if not outright deceit.

Further the report said people found “savings of 3 percent to 72 percent.” You know it skews heavily to the low end, proving once again the magic of the favorite phrase of retailers: “Up to … ” And then ” … about 17 percent of respondents said prices were actually higher.”

There are days I think the mystery of retail pricing strategy is second only to that of airfare pricing.

Kohl’s is the latest store to announce the opening of a small-format outlet store. (See today’s Milwaukee Journal Sentinel.) Evidently the 30,000 square foot store in New Jersey will be a test, starting with the sale of “like-new” apparel, accessories and home goods. It sounds like the initial purpose is to liquidate returned goods, especially e-commerce purchases returned to brick-and-mortar stores. (Full disclosure: Of course I worked for Kohl’s until 2006, but all I know is what I read in the paper!) This may make sense because of the amount of web-only goods being returned to stores’ physical locations, and it should certainly be a low-cost operation — assuming the logistics of moving clearance to a central store location are manageable. But if I were in the business of developing a new “small footprint” concept, I might start with a real strength of the Kohl’s business — fitness and active, athletic footwear, team apparel and other “healthy lifestyle” goods — and wrap it into a package that could profitably fill 10,000 square feet in a… Read more »
0
|
0
-   Share

There are times when retailers do know what they are doing. This might be one of those instances. Most savvy shoppers know where the best bargains are. In some cases the shopper might know they can get the same item for less at the outlet store. But factoring in the time and cost of travel is it really worth it?

20 years ago, going to an outlet mall was a real experience as the malls were few and far between, it often took a while to get to one and it was a real treasure hunt. Now it seems as if we may be over outlet-stored, and retailers may be shooting themselves in the collective foot with regards to pricing and quality.

Yes. Retailers are spreading their marketing monies and human and financial resources by trying to attract a consumer who is already in their store at one time or another. Instead, they should be attracting the consumer to stay longer in their current stores by simply including a markdown section at each of their stores (like many grocery stores do), or even on the bottom shelf, so that they can better manage the flow of their goods as they go through their shelf-life cycle.

There are other benefits to outlets that justify a higher price, sometimes. Outlets usually have better selection (size mostly) when compared to markdown items. You get a more consistent deal when visiting an outlet.

I don’t think formula pricing will work for markdowns and outlets.

Overplayed? Much like everything else from Black Friday to Cinco de Mayo? Quite possibly.
But the question then is who should be concerned, and why? Probably not the retailers themselves, who will simply close stores when leases run out. My bet will be its developers, who have built sprawling campuses of semi-detached buildings, often on the edge of town, or astride a highway between towns…the relative isolation may complicate repurposing efforts if—when?—the boom busts.

I don’t think this is an issue. I think they are two different shopping trips and mindsets for most consumers. They do higher expectations of finding a “deal” at the outlet stores, but overall, I think most brands are managing the two channels well.

Outlets are more about fun and variety. Not price. It’s not news to consumers that outlets can be pricier than markdowns. It’s not broke, no need to fix it.

Braintrust
"There are times when retailers do know what they are doing. This might be one of those instances. Most savvy shoppers know where the best bargains are. In some cases the shopper might know they can get the same item for less at the outlet store. But factoring in the time and cost of travel is it really worth it?"