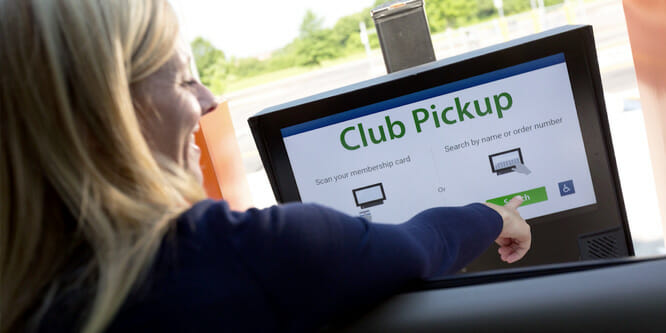 Sam’s Club announced yesterday that it is consolidating the number of membership options it offers from three to two and that, as previously announced, it is ramping up efforts to drive its online sales business.

The announcement continues a busy year for Sam’s, which last month announced it was giving its hourly workers a pay raise and a bonus, only to follow up with the sobering news it was closing 63 of its clubs and laying off thousands.

Jamie Iannone, chief executive officer of SamsClub.com, wrote in a blog post that the warehouse club’s new membership options include the basic Club (formerly Sam’s Savings) for $45 and Plus, a premium program that includes free shipping on most of the items the retailer sells online as well as on its Member’s Mark private label items with no minimum purchase. Plus members will also get cash rewards on purchases, access to early shopping hours in clubs, as well as pharmacy and optical discounts.

Mr. Iannone also said that the first Sam’s fulfillment center dedicated to online purchases would open in Memphis, TN in early spring. He said Sam’s is looking to “accelerate” the rollout of similar fulfillment centers in the back half of 2018. The company is looking at a wide variety of locations, including Central Florida, the Chicago area, the Mid-Atlantic, the Northeast, Southern California and Texas.

Ultimately, Mr. Iannone wrote, Sam’s is “focused on creating the quickest and most convenient shopping experience” for club members. He pointed to the chain’s Scan & Go technology and Club Pickup as two features that have advanced this strategic goal.

With its focus on e-commerce, Sam’s appears to be looking to undermine chief rivals Costco and Amazon.com as well as newcomers such as Boxed.com, whose CEO has spoken about the possibility of moving into brick and mortar.

Costco, which has gotten more aggressive with its online offerings in the past year, including in-club pickup and delivery in partnership with Instacart, is still relatively under-developed in e-commerce. Sam’s, which has failed to break Costco’s hold on the top spot among warehouse clubs, sees e-commerce and an integrated online/offline experience as key to changing that dynamic.

The Plus membership, with its annual fee and free deliveries with no minimum order element, appears similar to Amazon Prime with the key difference that many orders placed with Sam’s will be on items sold in bulk quantities.

DISCUSSION QUESTIONS: Will Sam’s new membership options and e-commerce strategy help it grow its business? Do you expect competitors – Costco, Amazon or others – to take any actions to thwart any potential advantage Sam’s may gain?

Please practice The RetailWire Golden Rule when submitting your comments.
Braintrust
"Sam’s Club is promoting their online services late and has a lot to make work well to be competitive with Amazon Prime."

"The best thing that could happen to Sam’s Club is to be spun off from the Walmart corporation so that it can determine its own fate."

"The big advantage for Sam’s Club is in its relationship with Walmart. It is Walmart."

The discount club space is more competitive than ever. Most decent sized merchants offer bulk purchase options (online at least), Boxed is growing rapidly, Costco is digging in, and Amazon is being Amazon.

The big advantage for Sam’s Club is in its relationship with Walmart. It is Walmart. So all the company’s new investment/initiatives in retail and e-commerce are essentially available to Sam’s. That’s a benefit and scale that no one can directly compete with except Amazon, but for now, Sam’s has the physical footprint advantage that could be leveraged as a growth factor over its number one nemesis.

Sam’s is doing what it needs to do to remain competitive. Retail is changing rapidly, and every day there’s another new concept and opportunity mostly because of technology. So it’s essential that Sam’s stays in the game just as every other retailer. For the moment, I don’t see any threat to Amazon or Costco, but if Sam’s strategy proves successful and other retailers begin to see a dip in their sales and Sam’s increase theirs, then I would see Amazon and Costco introducing competitive strategies.

However for the moment both Amazon and Costco have been doing very well with the existing programs they have. I would see their investments being put toward other opportunities building off of their existing customer bases. I believe they have less of a concern about Sam’s at this point.

Members of Sam’s Club are not in the habit of going online at Sam’s Club to order products. Changing membership categories and offering free shipping, if the are already Amazon Prime members, will not change their behavior. Sam’s Club is promoting their online services late and has a lot to make work well to be competitive with Amazon Prime.

Costco has enough work to do to make itself competitive to worry about Sam’s Club. Amazon does not need to work to thwart Sam’s Club because Amazon just continues to raise the bar for all competitors.

This is probably more about trying to solidify and hold position than trying to challenge Costco or Amazon. In context, Sam’s Club has 44 clubs in the U.S. and Costco has 514. They certainly can put pressure on Costco in the areas where they compete, but I think it’ll be difficult to mount a full-on competitive challenge when distribution is that mismatched. As for Amazon — I’m not sure they’ll even notice. They offer all the same things; some pretty great Amazon-label brands, most with a free shipping option (membership fee excluded) and their Prime membership is far more compelling.

Sam’s Club had a role before — Walmart needs to figure out how to make that story compelling again or there’s more trouble in the future.

Costco has always had the edge on Sam’s Club and I don’t see how this latest move will change that. The same applies to Amazon, which is such an integral part of some consumers’ lives that it will take more than this to steal its share.

This seems more like a defensive move to bolster sales and loyalty from existing members. It’s a good start but Sam’s will need to do a lot more if it is to boost growth.

Sam’s joining of the “us too” club is the simple recognition that multi-channel is a table stake for viable retail. But the Sam’s changes reflect the concern they must have for their business and competitive model in that “us too” world when every retailer is taking from the playbook of others. The lesson of Kodak, Blockbuster and others is that staying current and relevant offers a hedge against overnight obsolescence.

I don’t understand the logic of the new membership options. I mean, I get the “Prime”-like features of the higher-priced option, but what I don’t get is why Sam’s thinks that’s what its customers want … or want enough to make it a compelling strategy.

The fact that Sam’s closed so many stores tells me something about the organic limits of its value proposition. I don’t think this can expand those limits significantly enough to pose a threat to Costco or Amazon.

I’m with Ryan on this one. With so few locations and the closing of 63, it would appear they have much bigger issues to deal with. This will not likely even be a blip to Costco or Amazon. For my 2 cents.

Better late than never. The world today demands innovation. I don’t see this as a game-changer for anyone; however, Sam’s is starting in the right direction. It will take much more than new membership options and an e-commerce strategy to turn it around.

The best thing that could happen to Sam’s Club is to be spun off from the Walmart corporation so that it can determine its own fate. Right now it’s very much in third place in the corporate pecking order, and if the division were free it could establish an independent store opening strategy and redesign the stores themselves. The e-commerce moves are great but closing 63 stores is not an auspicious start to catching up and passing Costco. Sam’s Club profits declined in the nine months and sales were up only 3%. The absence of these closed units will stymie further sales growth. In contrast, Costco is several times larger than Sam’s Club, sales are growing much faster and it is very profitable.

Simplifying the membership options is a smart move. Sounds like a page straight out of Apple’s playbook. Next, moving to ecommerce is a no-brainer these days. But better than that, Sam’s is offering club pickup (or in-store pickup). This is smarter than just running another channel, which could just frustrate club members. Good for them, for taking one overall strategy shift that includes driving omni-channel retailing.

The opportunity is in Costco’s court. It would be wise of them to get onboard fast, and move with their ecommerce/omnichannel strategy — in a parallel move. Will they? I am hopeful to see that coming as an announcement soon.

These are all good moves for Sam’s to make, but they do feel a bit defensive rather than innovative moves to differentiate themselves from Costco, Amazon, and Boxed.com. While Costco should start making more digital-centric moves for their part, they really don’t need to respond to what Sam’s has announced directly. I doubt Amazon will even take notice as they are so customer focused rather than competitor focused.

This, I am afraid, is a case of much too little, far too late. Simplified membership plans that will cost them a fortune in shipping costs for an upgraded eCommerce experience feels woefully inadequate. Even with the might and muscle of Walmart behind Sam’s Club, they are dwarfed by Costco and Amazon; they both far outflank Sam’s Club on size, scale, innovation, assortment and experience. So, despite these new investments, I think this will remain a very steep hill for Sam’s Club to climb.

Yes, this new membership option may increase Sam’s club’s business. However, it will also be a double-edged sword, acting to shift their internal focus away from being a club store, by trying to be all things to all people. Sam’s should instead focus on becoming either a very good club store, or a very good etailer. Not both. Sam’s is in their current situation because they keep jumping from model to model, rather than focusing their resources, efforts, vision and mission on becoming great at one thing.

Even being second best as a warehouse club, but still growing your business year over year is a better focus than surprising consumers with last minute club closings, headquarter layoffs, and a blurred corporate vision.

Clarify their business, quantify their goals, and communicate this to their customers should bet Sam’s first option. Doing anything less only hurts Sam’s Club.

Better late than never, but they still have a lot of catching up to do. The key will be to not look at in-store and online as separate strategies, but to truly make strides in optimizing the omnichannel experience for customers. It’s a tough nut to crack, but arguably, no one has gotten it quite right yet. Whoever can solve that puzzle the best now and in the coming years is poised to have the competitive advantage.

Braintrust
"Sam’s Club is promoting their online services late and has a lot to make work well to be competitive with Amazon Prime."

"The best thing that could happen to Sam’s Club is to be spun off from the Walmart corporation so that it can determine its own fate."

"The big advantage for Sam’s Club is in its relationship with Walmart. It is Walmart."