Ross Stores is on an off-price roll 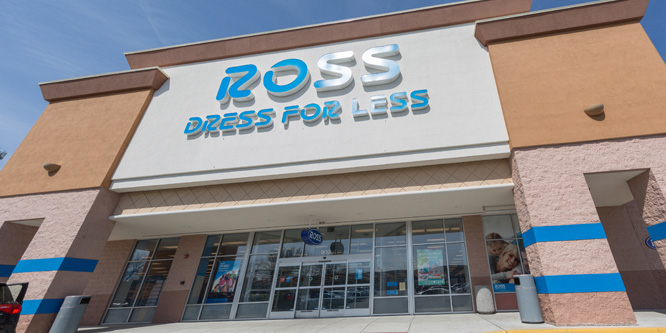 While some retailers are running into hurdles in the new economy, off-price retailer Ross is thriving, and is intent on becoming an even bigger force in the world of discount retail.

In June and July alone, Ross opened multiple stores from two different concepts — 22 locations of its apparel concept Ross Dress for Less across 12 states and eight new locations of dd’s DISCOUNTS, its home goods chain, according to Retail Leader. Ross plans to continue building its presence with both concepts, increasing its Dress for Less current store count from 1,651 to 2,000 locations and dd’s DISCOUNTS chain to 500 stores.

The resurgence in off-price retail began in the wake of the last economic downturn and has continued since. TJX has experienced huge success with its treasure hunt-oriented T.J. Maxx and expanded its portfolio to include more than one home goods chain, introducing Homesense last year in addition to its existing HomeGoods.

Ross may be TJX’s most significant competitor. The Motley Fool reports that Ross has outgrown TJX consistently over a three-year span. The retailer has been in business since 1982, but this decade began expanding aggressively into previously unexplored markets, like the Midwest where it now has 149 locations.

The number of discount competitors has grown in recent years, with mainstream retailers such as Macy’s launching their own off-price concepts. Macy’s, which initially launched its off-price Backstage business as a standalone concept, has since begun opening branded shops within its full assortment department stores.

Even thrift store chain Goodwill has experienced an influx of popularity, which led to a perceived move upmarket and necessitated the creation of a new down-market concept, Simply Goodwill, for ultra-discount shoppers.

It’s unlikely that Ross will consider an upmarket move to differentiate as it enters new territory. The company’s shift away from its off-price roots was a notable failure in the late eighties and early nineties. That led the company to develop a strategy that it has stuck to up to the present day.

DISCUSSION QUESTIONS: Do you see Ross Stores becoming a force in off-price retail similar to TJX Companies? Should Ross concentrate on taking share from non-discount competitors or be primarily concerned with competing against Marshalls, T.J. Maxx, HomeGoods, etc.?

Please practice The RetailWire Golden Rule when submitting your comments.
Braintrust
"Ross is already a force in off-price retail, and their growth will only make them more formidable."

"In my opinion, not having an e-commerce store is a weakness today."

"Experience? Reallly? Yes. When I stand in a Ross store and watch shoppers, you can see they enjoy the chaos..."

9 Comments on "Ross Stores is on an off-price roll"

Ross is already a force in off-price and it’s clearly gaining momentum. There appears to be plenty of room for Ross to continue to expand its current offering. Expanding into additional lines like TJX may be an option, but these forays should be done cautiously. Ross appears to have a successful strategy that is both taking share from its direct discount competitors and non-discount competitors. The results are clear – Ross is on a good path.

Ross is still growing by opening stores. But their comp store sales growth is 3 percent, somewhat below the comp store sales growth of T.J.Maxx, Marshalls, and HomeGoods. In my opinion, not having an e-commerce store is a weakness today. You cannot make a purchase on their website. You can only sign up for emails. If Ross does not have a convenient location for a customer, they will lose the sale.

Ross should concentrate on building new customers rather than trying to take share away from the other discounters.

I see Ross as one notch further down-market than the TJX brands due to their merchandising and brand mix. That said, that’s a good place to be. Ross shouldn’t try to go upmarket as they will butt heads with the all of the off-price department store brands. Their strategy is clearly working. They should remain laser focused on their mission and if they do, I see them continuing the success they have seen.

I would suggest that, at 1,651 stores, Ross is already a force in off-price retail, and their growth will only make them more formidable. While they certainly must keep a constant eye on the burgeoning discount market, I think there is definite opportunity for both Ross and TJX to carve share from full assortment retailers as well. I think to do so, they will have to invest more into experiences and integrated journeys than they do now, so that will require culture change, but if they embrace the change, there is loads of room to begin poaching share.

Ross has been a force for quite some time. Just because they didn’t have the ubiquity or breadth of content of TJX doesn’t mean they weren’t a force. The value customer is going to have choices galore. I was in Lord & Taylor and Macy’s yesterday. Both are schizophrenic. Do I want to be Nordstrom or Marshalls? Macy’s and Lord & Taylor are both trying to keep the customer from getting in their car and heading to Ross and TJX, but they are both eating their soul in the process. Meanwhile Ross just needs to stay the course.

Ross provides an outstanding experience that’s valued by a strong segment of shoppers. That’s why they succeed.

Experience? Reallly? Yes. When I stand in a Ross store and watch shoppers, you can see they enjoy the chaos, the search, the discovery of a deal, and the sense they are making good use of their money.

We must develop a neutral eye — to see experience where it comes. In the same way, the National Enquirer is a superbly managed brand. Why? They always deliver exactly what their readers want — sleazy stories that skate (and go over) the edges of truth. And they have done it week after week for decades.

Is Ross an experience I love or the Enquirer a brand I value? NO for both. But that’s not important. It’s far more important to recognize that a Nordstrom experience is NOT what everyone wants.

Off-price is still one of the hottest segments in retail, as consumers have fallen in love with the thrill of the treasure hunt. Ross Stores is already a force in off-price retail, as they have more stores (1,651) than T.J.Maxx (1,231). If you combine T.J.Maxx and Marshalls (1,073), then T.J.Maxx companies have more stores (2,304). However, from a brand presence perspective Ross is a big player and continuing to expand.

The prime target market for Ross includes the same shoppers that frequent T.J.Maxx/Marshalls and additionally a less affluent clientele. This market would appear to be getting pretty saturated. If you add in the 631 Burlington coat stores into the mix, that’s 4,586 off-price apparel retail stores but the sales keep increasing for all, even in a super-heated economy. When the next economic downturn materializes, as it certainly will, these stores will continue their climb — off-price is here to stay. As we say in Boston — we love a bahhhgin!

Dare I say Dress Barn — 739 stores and part of Ascena shows a counter-culture to the spike in off-price apparel retail, with decreasing sales, down 13.8% YOY (per eMarketer) in the trailing twelve months. Ascena’s looking for a turnaround.

I highlight Dress Barn because Ross’s future is not automatically rosy by being part of the off-price discount market. The discounter will have plenty of competition in their own demographic niche, but strangely, with Amazon et. al. also looking to be bargain-hunter friends and moving downstream, Ross would need be open minded about building their market with incentives and innovation.

From an economic perspective, the retail marketplace has essentially split into three segments: the wealthy (top ~1%, seeking true luxury experiences), the affluent (top ~20% or so, seeking premium products and the occasional luxury treat, but still with a value-orientation), and mainstream consumers (everybody else). For a consumer behavior point-of-view, “middle class” consumers increasingly behave like those who are struggling, in terms of their value-orientation, openness to store brands, willingness to forgo a nice experience or good customer service for a deal, etc. It’s within these three segments that growth opportunities are to be found, and Ross is thriving at the lower end. Dollar stores have been thriving for the same reason — clear positioning in a growing segment. The decline of Sears and JCPenney and Kmart have certainly been fueled by shift toward e-commerce, but as Ross is showing, it’s possible to thrive even without an e-commerce option. Sears, etc. are struggling because they got caught in the middle, without a clear value proposition, still trying to connect with a thriving middle class that… Read more »
0
|
0
-   Share

Braintrust
"Ross is already a force in off-price retail, and their growth will only make them more formidable."

"In my opinion, not having an e-commerce store is a weakness today."

"Experience? Reallly? Yes. When I stand in a Ross store and watch shoppers, you can see they enjoy the chaos..."