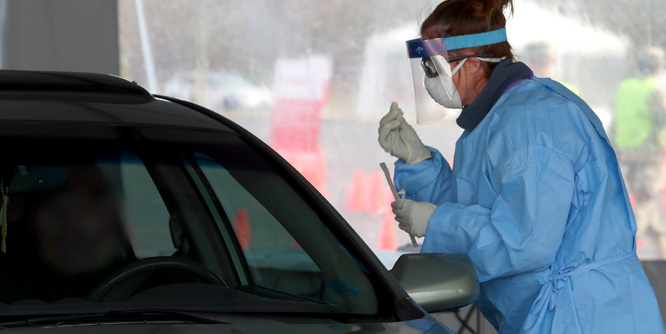 Retailers are starting to open drive-thru COVID-19 testing sites to the public for the first time. Are they ready?

On March 13, the CEOs of Walmart, Target, CVS and Walgreens joined President Donald Trump in the Rose Garden to reveal they would be hosting drive-thru testing in their parking lots. Only five have opened so far — three by CVS, two from Walmart and one by Rite Aid. The slow start reflects the nation’s challenges when it comes to providing testing access.

Insufficient supplies of testing components such as nasal swabs has hampered testing at hospitals, according to a late-March survey of health providers from the U.S. Department of Health and Human Services (HHS). With outside labs overwhelmed, test results are often delayed by a week or more.

In most cases, the testing sites opened by retailers have been reserved for first responders due to the test shortages. As a result, coronavirus testing has remained largely unavailable to the masses.

Last week, however, CVS opened its first three testing sites for the public, and Walgreens announced plans to open 15.

Both will be using Abbott Laboratories’ new “rapid” ID Now COVID-19 test, which delivers positive results in as little as five minutes and negative results within 13 minutes. Store pharmacists will be overseeing the testing.

Lessons incorporated in initial pilots of testing centers will be used to maximize the efficiency and safety at the new sites. CVS said the testing will take place in large parking lots able to accommodate multiple lanes of cars at one time and will require eligible individuals to pre-register online. Walgreens plans to introduce an online assessment tool.

All testing is free and by appointment only. Prospective patients must provide a doctor’s note or fill out an assessment from either chain’s website verifying that they have COVID-19 symptoms to qualify.

The retailers are expected to supplement the efforts of medical facilities. “We’re continuing to do everything we can, both with our own resources and also by partnering with others, to serve as an access point within the community for COVID-19 testing,” said Richard Ashworth, Walgreens’ president, in a statement.

DISCUSSION QUESTIONS: What challenges do you expect retailers to face rolling out COVID-19 testing? Is retail a viable solution? Will testing centers disrupt each store’s role in providing essential needs to Americans?

Please practice The RetailWire Golden Rule when submitting your comments.
Braintrust
"Kudos to those retailers, medical suppliers, drug companies and testing labs who are stepping up as fast as they can to make this happen. "

"Those who step up to help may not have it perfect, but they are doing something to help. That positive is going to go a lot further than any negative."

"Bottom line, with no previous crisis of this magnitude by which to leverage experience, I wouldn’t point fingers at any retailer at this point."

Placing testing centers in retail parking lots is a sensible way of allowing the public to access such facilities. However, retailers are not the ones in control here, their ability to roll this out is governed by the availability of testing kits and government guidance. There have been shortcomings on both fronts, so progress has been much slower than first thought.

Given that the testing facilities will be in parking lots, I don’t see the testing centers being massively disruptive to retailers providing essentials. Though if volumes are great, traffic flow will need to be carefully managed.

Retailers with onsite pharmacies doing testing makes tremendous sense. It’s certainly no more difficult than administering a flu shot. And they have the locations and personnel to provide a much higher throughput than hospitals and medical offices. As for the state of our preparedness and the speed of turning resolve into physical testing equipment, we would all do well to take a step back and remember that Mother Nature writ large is still in charge of this old world. We will never adequately anticipate everything she will throw at us. And show me one executive who hasn’t said “do it now!” and genuinely meant it — only to learn later from the supply chain folks that “now” would be a month away at best. Most importantly, kudos to those retailers, medical suppliers, drug companies and testing labs who are stepping up as fast as they can to make this happen. They all deserve bouquets — not brickbats.

The parking lots make sense as a location. But do we really want retailers managing testing?

Retailers should be applauded for their efforts to enable more testing, however, it’s clear they are not in full control of the situation and are struggling to create more of these facilities. Five locations after a month of announcing the effort is a pretty poor result. If testing supplies are not widely available in large quantities then retailers can’t be expected to provide something health care facilities themselves are struggling to provide. Success here requires the right leadership at the top levels of government, not just the retailers involved.

By providing these facilities in parking lots, I don’t see much disruption inside stores as a result. This is really a function of the size of the parking lot and the volume of traffic from people wanting to be tested. As long as these flows are managed, I don’t see it becoming a problem in the near future.

This just goes to show that many are stepping up in the ways that they can. Sure, pharmacies and others well positioned are great ways to help the testing effort. As for consumers. I don’t know about you, but I have faith in my fellow man and believe that most of us understand by now that this is unprecedented. Those who step up to help may not have it perfect, but they are doing something to help. That positive is going to go a lot further than any negative.

Remember this is not just a problem in this country, but in the WHOLE world! We have 328M people in this country and that is a HUGE job. I’m just thankful to all and any who step up to serve. And that’s MY 2 cents.

If you look at retailers’ responses to the pandemic at a high level, I’m actually impressed with how swiftly most are adapting major aspects of their operating models across business functions. As the supply begins to approach demand for testing equipment, the process will get more efficient. Bottom line, with no previous crisis of this magnitude by which to leverage experience, I wouldn’t point fingers at any retailer at this point.

I’m hoping there was a typo in this story: “…five have opened…” Five? It should be obvious to anyone that unless the testing sites can show the kind of exponential growth that the virus has, they aren’t going to play much of a part in this crisis … maybe in the recovery/reopening stage (he offers hopefully).

On the subject of drive-through COVID-19 testing, it appears that several of the nation’s largest retailers now find themselves sucked into the “empty-promise vortex” that swirls in D.C.

Great intentions mean nothing if there is sluggish follow through. In this instance there is no shortage of tents or parking lots to put them in. It’s the tests themselves that are in short supply, not to mention the capacity to process them.

Now that a handful of prototypes are in place, one can only hope we’ll begin to see some significant scale added over the next couple of weeks. Getting this done is critical for our nation’s welfare and also of immense importance to the participating retailers themselves, since reliable knowledge of the scope of the contagion will be a critical factor in the decision to reopen stores for “normal” business.

Braintrust
"Kudos to those retailers, medical suppliers, drug companies and testing labs who are stepping up as fast as they can to make this happen. "

"Those who step up to help may not have it perfect, but they are doing something to help. That positive is going to go a lot further than any negative."

"Bottom line, with no previous crisis of this magnitude by which to leverage experience, I wouldn’t point fingers at any retailer at this point."