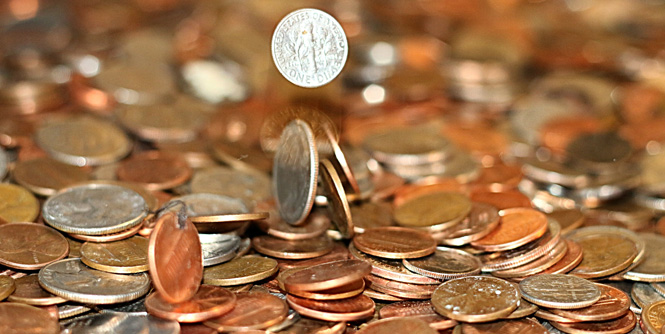 Despite rumors to the contrary, America is not in the middle of national coin shortage. That’s the conclusion of the U.S. Coin Task Force established last month by the United States Mint and Federal Reserve.

According to the government, there are still plenty of pennies, nickels, dimes and quarters around; the problem is that $48 billion’s worth has been squirreled away in car cup holders, jars, under couch cushions and in other places inside of the nation’s 128 million households. Many businesses that closed their doors in recent months are also holding onto coinage. Last week, the U.S. Mint issued a statement asking Americans to collect their spare change and start spending, depositing or exchanging it for paper cash to boost coin circulation.

When the pandemic hit and stores and restaurants closed, many businesses promoted consumer use of credit and debit cards as a means to slow the spread of the novel coronavirus. As stores have begun to reopen and fears about contact surface transmission have lessened, consumers have started using cash to make purchases, albeit not with exact change.

“The weak circulation affects most everyone but the hardest hit are small cash-dependent businesses and those who are least well off,” Hannah Walker, a member of the task force and vice president, political affairs with FMI, said in a statement. “For millions of Americans, cash is the only form of payment.”

Businesses have taken a variety of approaches to the lack of change. USA Today reported earlier this week that Chick-fil-A locations in Virginia are offering a free entree voucher to customers who exchange $10 of rolled coins for $10 in paper cash. Other businesses have similar offers, including select 7-Eleven stores that give away a free Slurpee to those who trade $5 in change for $5 in bills.

Last week, a man from Wisconsin, identified as Jim Holton, used a dolly to lug in more than $5,000 worth of coins to a bank after hearing of the need for coins, Newsweek reports. Mr. Holton had been saving for when his grandkids graduated from college, figuring “we could do something fun like go to Europe or something else that we never dreamed of doing.”

DISCUSSION QUESTIONS: How would you recommend retailers and others facing a shortage of coins get consumers to spend them? What should stores do if they find themselves in situations where they cannot make change?

Please practice The RetailWire Golden Rule when submitting your comments.
Braintrust
"I bet that in a 15 minute brainstorming session a smart retail team could come up with at least a dozen ways to entice customers to pay with coins."

"Could this perceived coin shortage be an opportunity to entice more customers to pay with cards instead...?"

I once purchased a $200 coat in unrolled dimes because the salesperson at an upscale department store had been remarkably rude to me, but I really wanted the coat. I understand the value of coins. #truestory

It is completely understandable that businesses are avoiding cash due to the pandemic but at the same time using my AmEx to pay for a $2 cup of coffee makes no sense to me. Finding ways to get shoppers to pay in cash isn’t that hard if you offer an incentive. Merely putting it out there that cash is preferable and here’s why would work. I bet that in a 15 minute brainstorming session a smart retail team could come up with at least a dozen ways to entice customers to pay with coins.

I love that story! There are a lot of businesses that are offering more money for turning in coins than the value of the coins. There are definitely a lot of creative ways we are seeing to get more coins coming into the market.

I was still in college. I showed up at the fancy joint in bell bottoms and whatever graphic t-shirt was popular at the time. The snotty salesperson took one look and assumed I had no money. Two hundred dimes are heavy but watching her count them was so worth it!

Any business can create a relevant incentive to get customers to bring in and use coins. This is a chance to get employees together, find a creative approach, and execute. No need to overthink it.

Schedules that are too lean allow less of a chance for employees to go to the bank. Rounding up is fine to ask. Let’s worry about closing more sales and not get distracted.

Whatever incentives you create will only move those people that were already willing to dig up their coins and actually use them at retailers. The incentives will not motivate the rest that won’t deal with any cash, let alone coins, during the pandemic. Personally, I have not used cash since early March and have only used credit cards. So fix the bigger problem and you’ll fix the “non-coin” shortage. Although unsatisfying, until we get the vaccine and regain confidence, a simple sign informing customers that you can’t make change will have to suffice.

Let’s start with what I wouldn’t recommend – rounding up. Looks too much like a – quite literal – nickel and dime scam. How about something novel like, oh, I don’t know — rounding down? Of course any solution that works for cash customers has sort of a reverse impact on non-cash users. Round up, and you are giving a benefit to credit card users and therefore discriminating against those without cards. Round down, and you are penalizing card users who are paying – admittedly something south of a dollar – more for the same items. But of those two problems, I’d still rather round down, since it might give a few miserly people a reason to switch back to using cash — and presumably some additional change.

I’m with you on that Ryan. The problem is the customer won’t know which price is rounded up and which down!

I see signs on counter tops asking the customers to please use their change. However I believe most don’t want to fish for pennies and dimes while standing in the checkout lanes. I have found myself handing over a $5 bill to my barista while not wanting to fumble through my pocket for loose change. I must be one of the worst, because when I arrive home at the end of the day I consistently empty my pockets of all change on my dresser. It now weighs 300 pounds. One logical and acceptable move I have seen — credit my frequency card the change the store owes me.

To say nothing of your significant other telling you to please clean off your dresser! Other guys have told me that’s what happens.

Ian, you are spot on!

Look to the North! The answer is abolish pennies and go to Loonies and Toonies. That will get things circulating and save the country multiple millions!

And re: price points — we all know those are largely imaginary. We cling to the myth that $14.97 is more appealing than $15. Let’s go to RNP – round number pricing.

Georganne is right. Retailers, especially those like c-stores or QSRs who have items with single digit price points, could quickly develop several offers to solicit coins. Free fountain drinks, cups of coffee, sandwiches, etc. The issue comes when the retailer’s offer requires rolled coins because that requires having coin rolls to use. I understand why they do because should a customer come in with $20 in loose coins it takes time to count them which can impact speed of service for all the other customers.

The issue becomes a lot easier when banks reopen those closed branches and customers get coin rolls or, better yet, come in with the jars of loose coins and the bank coin counter can be used to convert coins to bills.

Could this perceived coin shortage be an opportunity to entice more customers to pay with cards instead – or, better, for the business community to innovate with seamless, accessible, and less expensive payment methods?

Cash is expensive and burdensome for small retailers, but credit and debit cards are not accessible to all customers. Alternative payment methods have been increasing over the past few years, but none has really experienced a major breakthrough in retail. Will this change due to COVID-19?

Having worked in an establishment that did not handle coins — only cash or cards — this is a familiar space. In addition to offering incentives to exchange coins for cash, a bold move may be to round down the purchase cost to the nearest whole dollar (if the change due is less than 50 cents). This is not something retailers can do everyday and likely not something to announce broadly. However an occasional surprise and delight strategy to unsuspecting customers, especially those that can use the break, may be one way to keep customers coming back.

Communication is the issue. Retailers don’t need to make big statements. All they need to do is put small signs at each cash register saying “We need coins! Thanks for helping out.”

People like to help — especially in a crisis like today’s COVID-19 pandemic. There aren’t many things we can do about the pandemic. But we can help with coins. Just ask.

OK, step back from the real world just for a moment. Even for those unbanked, do we REALLY still need coins? There has GOT to be a better way to transact than with heavy coins that cost more to manufacture than they’re worth. Other countries have engaged in “currency reform” and we could tailor it for our monetary system. I say melt them down!

I don’t think we as a country are in any position to encourage walking away from contactless transactions. COVID-19 is, unfortunately, spreading like a forest fire. The country has managed up to this point with all of this stagnant coinage. I suggest retailers do nothing to encourage the use of coins or paper, until we are through this pandemic, or at least until it’s under control.

I totally understand that for some less fortunate individuals, cash is the only means of payment, and for these individuals retailers should honor cash as a form of payment. But as an industry, I don’t think we should be encouraging contact transactions. Finally, if a retailer finds themselves unable to make change, they should round the transaction down to the lower dollar amount. Shame on them for not having the appropriate change in their register till.

Braintrust
"I bet that in a 15 minute brainstorming session a smart retail team could come up with at least a dozen ways to entice customers to pay with coins."

"Could this perceived coin shortage be an opportunity to entice more customers to pay with cards instead...?"