Rather than compete, Walmart inks exclusive deal with Netflix 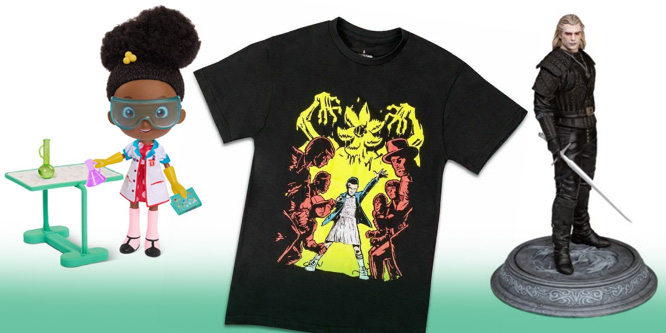 Walmart has gone from aspiring to compete with Netflix in the digital video subscription market to making a deal to sell merchandise linked to its erstwhile rival’s original programming on its site.

The mass merchandiser announced yesterday that it has launched the Netflix Hub on walmart.com to feature merchandise from Netflix shows, such as Stranger Things, Nailed It! CoComelon and The Witcher. Squid Game merchandise, while not yet on sale, will be coming soon in the form of t-shirts.

“We love it when stories transcend screens and become part of people’s lives,” Josh Simon, vice president, consumer products at Netflix, told USA Today. “Walmart gave us the opportunity to deliver a shopping experience that sets a new level of innovation for the entertainment consumer products space.”

Many of the Netflix items sold by Walmart will be exclusive to the retailer including:

The two companies plan to continue bringing new merchandise to market in such categories as apparel, music, toys and games.

He cited the coming launch of “a crowd-sourcing opportunity called Netflix Fan Select that will allow fans the opportunity to vote for merchandise they’d like to see from favored Netflix shows — and then Walmart merchants will bring them to life!”

Walmart, as recently as 2018, had thought that it could compete with Netflix, Amazon.com and others in the video subscription space. The retailer sold its Vudu video service last year to Comcast’s Fandango movie ticketing business.

DISCUSSION QUESTIONS: What do you see Walmart and Netflix gaining from their online hub deal? Do you see this as a deal that the parties can expand in a significant way to the in-store environment, as well?

Please practice The RetailWire Golden Rule when submitting your comments.
Braintrust
"While partnership deals are many, only a few fall into the high potential category as this deal does."

"The marketing value for having Netflix in every Walmart store is immense in itself."

16 Comments on "Rather than compete, Walmart inks exclusive deal with Netflix"

Netflix offers a veritable cornucopia of merchandising opportunities and Walmart offers broad, multichannel distribution at scale. Given the constant stream of new content from Netflix, it’s not hard to see how this relationship could endure for many years to come. While partnership deals are many, only a few fall into the high potential category as this deal does.

Walmart gives Netflix a significant sales channel and enormous reach for branded merchandise. Netflix provides Walmart with another point of interest that will drive traffic online, and a lineup for interesting merchandise that should sell well. It’s a win-win situation. That said, don’t discount Netflix doing much more direct to consumer stuff in the future. As for stores, this could work very well in shops – but Walmart would need to get its act together on merchandising things well for it to be effective.

This is a brilliant move for both parties, but especially for Walmart. This is a prime example of a retailer understanding its core competencies, competitors, and capabilities. Owning its own streaming platform would’ve continued to crowd an already saturated market without differentiating strengths to gain significant share. This exclusive partnership paves the way for Netflix to extend the life of its shows and for Walmart to be the go-to spot for loyal consumers of the biggest shows, literally, in the world.

In the short term, this is a win-win for both Netflix and Walmart. Netflix gets immediate access to a large and diverse audience while Walmart offers shoppers something new and different. This does have potential for going inside the four walls, but I would advise both parties to wait until they can digest the online performance metrics.

A merchandising deal is straightforward and should produce profit streams for both Netflix and Walmart. Now imagine if their relationship blossoms into second-party data sharing for addressable digital advertising! Walmart is already offering ad services. Imagine if their first-party data assets were enriched with Netflix recommendation engine profiles. This would be worth billions to Netflix as Walmart could challenge Amazon for number three in ad revenues (after Google and Facebook). And this would be VERY high margin revenue for both.

This is going to be a powerhouse relationship where Walmart knew the only way to compete with Netflix was to not compete but to partner. A $25 billion Netflix with a $560 billion Walmart is a merchandiser’s gift that will keep on giving.

At this point Walmart’s partnership with Netflix doesn’t appear to be an alternative to competing with Netflix, it is a merchandising deal, not dissimilar to Walmart’s hookup with Gap for home products. It sounds like content could come into play at some point but that is also true for many entertainment licensing programs. More than anything, the partnership signals Netflix’ intention to expand beyond content and diversify by harnessing its growing fan base(s). Netflix gains new revenue through a massive global retailer and insights into which properties are most viable for merchandise. Walmart gains relevance with highly-engaged Netflix fans who will likely hop off the hub to make additional purchases with Walmart.

Yet another powerful partnership that boosts Walmart’s competitiveness.

Walmart gains relevance among younger consumers and an abundance of digital advertising opportunities.

Both companies will attract communities by appealing to enthusiastic fans of shows like Stranger Things and Cobra Kai. This partnership will embed Walmart and Netflix into more of our daily media consumption habits and weekly shopping habits.

Overall, media moves merchandise, so this deal will help Walmart and Netflix boost sales in stores and online.

This could turn out to be a huge business. Some Netflix series’ have become real cultural touch points and, if merchandise is easily available, it will sell. I’ll predict that other streaming companies could make similar deals.

Netflix understands the dynamics of online video streaming better than anyone. Walmart is making strategic moves to increase its moments of interactions with consumers. This deal helps both companies and provides future merchandising opportunities in-store and online. The blurring of boundaries continues to extend into creating novel ecosystems with a wealth of actionable data.

This is a great partnership from a consumer perspective – these strategic partnerships simplify getting eyeballs on both brands and keep things streamlined for the consumer, rather than needing them to add one more streaming service or DTC website.

This should be a winner for both companies. Netflix is the largest streaming service and Walmart the largest retailer. This means neither has any reason to attempt to complete with the other. I believe this is a case where one plus one will equal three.

This is a game changer for Netflix in terms of merchandising their unique shows and for Walmart in rapid buildout of a unique line of product options that will drive the Netflix community to their stores. Netflix brings over 200 million subscribers to the equation and whatever deal is struck, the distribution opportunity and sales becomes significant. This will be successful and co-marketing will be key.

Can this deal expand beyond merchandising? Possibly, but the ad market is a bit different in scope. The marketing value for having Netflix in every Walmart store is immense in itself. Will need to see the fallout from competitors as they try to accommodate or copy. This is especially a blow to Prime as it has no physical store-based partner and will be challenged on exclusivity.

Another retailer establishes closer ties to content production. I have long been bullish on the potential for retailers and brands to build brand and sell more product with content production as a marketing strategy. Think Barnes & Noble and The Queen’s Gambit. While a licensing deal is by no means content production, it does further the thinking in that direction.

A straightforward partnership for Walmart that delivers new products their customers are likely to want — Netflix related merchandise! It’s a win-win for both as Netflix gains an instant, widespread distribution channel for their merchandise while Walmart will undoubtedly gain sales and increase loyalty from customers that are also Netflix subscribers. What’s not to like about this partnership?

I hope that this expands to a Netflix store-in-a-store at Walmart locations to leverage the great branding potential beyond the Walmart.com presence. This is another great example of retailers partnering with other strong brands to deliver what their customers want.

Walking away from Vudu gave Walmart the right to explore a new approach to video. This partnership with Netflix allows Walmart to have a stake in the video market while leveraging their core strength in retail.

Whatever these two companies make of this partnership, is yet to be determined but it has all the necessary makings of a successful venture. Online.

A Netflix store within Walmart is another story. It’s still Walmart. It would be nearly impossible to deliver on consumer experience expectations. However, a freestanding Netflix Experience Store is something worth considering.

Braintrust
"While partnership deals are many, only a few fall into the high potential category as this deal does."

"The marketing value for having Netflix in every Walmart store is immense in itself."