Primark picking up pace of U.S. expansion after being slowed by the pandemic 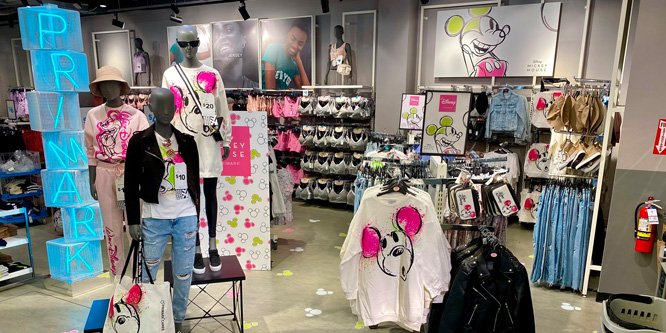 Fast-fashion retailer Primark announced last week that it will open its newest store in the U.S. in Philadelphia’s Fashion District on Sept 16.

The 34,200-square-foot location, which will employ up to 350 people, will be the third Primark in Pennsylvania and its twelfth in the U.S. Another location in Tyson, VA is planned and the retailer has also confirmed a future store location in Valley Stream, NY. The Philly store will be supplied through the chain’s distribution in Bethlehem, PA.

Andy Stewart, president of Primark U.S., said the new store in Philadelphia “will mark another important milestone in our ongoing expansion in the U.S.” The retailer’s model of selling low-price fashion, beauty, confectionery and home goods has fueled growth to nearly 400 locations in 14 countries.

The chain, a division of Associated British Foods, was forced to slow its store expansion plans as much of the U.S. went into pandemic lockdown mode last year. The retailer, which opened its first American store in 2015 in Boston, does not sell online in the U.S. and its business took a major hit as consumers stayed home.

Business has picked up in recent months with consumers feeling more confident about shopping in public tied to high vaccination rates in the predominantly East Coast markets where the chain has located most of its stores. It also operates a store in Chicago.

Primark reported an increase of 207 percent in revenues for its quarter ending June 19, a three percent improvement over what it did during the same period in 2019. The retailer subsequently increased its forecast of the full year, expecting continued growth through the end of the calendar year. The retailer, which saw inventory go up as lockdowns went into effect last year, has been reducing what it keeps on hand and expects to return to normal levels by the end of 2021.

Some have questioned if Primark’s fast-fashion business model is sustainable in the U.S. due to environmental concerns around clothing viewed as disposable as well as heavy competition from discounters and growing demand for resale items.

DISCUSSION QUESTIONS: What do you think about Primark’s fast-fashion business model and its chances for success in the U.S.? Do you see its store expansion strategy as prudent, too cautious or risky?

Please practice The RetailWire Golden Rule when submitting your comments.
Braintrust
"I think with the novelty of the whole operation, NOT having e-commerce might actually benefit them, IF they stay small that is."

"Primark has a combination of product, presentation and pricing that is compelling. Better than Target. Way better than J.C. Penney."

8 Comments on "Primark picking up pace of U.S. expansion after being slowed by the pandemic"

Fast-fashion may be in the limelight but it’s far from extinction as this customer still exists and Primark has a front seat.

Primark will absolutely succeed in the U.S. and the lineups outside its UK stores after the first lockdown are evidence that customers want Primark prices and fashion.

This store is not going anywhere and will continue to scale as long as they keep doing what they’re doing which is giving the customer what they want — newness at low price points season after season.

In 2016, I watched Primark open a store in Danbury, CT. Sears shrank from a two-story store to one story. Primark opened in the top floor. The store was mobbed on its first day, and after spending an hour in the store I had one simple thought: J.C. Penney, down the mall, is toast. At the time I was in that mall two or three times a week doing ongoing research. As I got to know several of the individual store managers, they would comment from time to time about the impact of the Primark opening. Yes, foot traffic to that end of the mall was way up. Foot traffic to many of the individual stores was down. Shoppers were just heading straight to Primark. Good product, GREAT presentation, and amazing prices were winning the day. After each subsequent visit, I always made it a point to leave Primark and head to J.C. Penney to count shoppers. Primark was always busy. J.C. Penney was always crickets. My thought is not just about fast fashion and… Read more »
2
|
0
-   Share

Have you ever been in a Primark after say, mid-day? What a mess! Like shopping at a flea market only not as organized. Having said that, it is kind of fun just ripping through $8 jean stacks and $10 shirts. They will do well if they keep the number of stores under 30 (in key markets with high traffic). And I think with the novelty of the whole operation, NOT having e-commerce might actually benefit them, IF they stay small that is.

Primark has been very cautious about its U.S. expansion – and given the graveyard of failure of other UK retailers coming to the U.S., this is quite understandable. However the business model works in the U.S. and it has attracted many customers who love the low prices and fashionability of the brand. The idea that people in the U.S. won’t shop at Primark simply because of environmental concerns is just silly. American consumers are already shopping many other fast fashion brands and Primark does extremely well in Europe where environmental consciousness is higher. However the concerns around stiffer price competition in the U.S. are valid. U.S. consumers are more enticed by bargains and deals than their UK counterparts – one of the reasons off-price is stronger – and this blunts Primark’s focus on everyday low prices rather than discounting, albeit to a small degree.

Primark will have to thread the needle between consumers’ growing positivity towards discounters and resale items. That’s a tough business model to make work, especially without an online presence.

Primark has been extremely successful in the UK without an e-commerce platform, so I’m not surprised that it’s survived the pandemic both overseas and here and is beginning to thrive again. I do think the retailer needs to cross over into digital to keep the momentum, though, especially while the retailer continues in the U.S. to work towards the brand recognition and loyalty it has in the UK.

Despite younger generations’ climate change concerns, fast fashion isn’t going anywhere. The U.S. fast fashion market hasn’t had any newcomers in a while, so this growth will be very timely if Primark can simultaneously nail down a sustainability strategy.

Primark will continue to be more and more profitable. They must be sure they are paying very low rent. I am surprised they are opening in so many A malls, but I am sure they are negotiating hard. The key to success in retail has always been to listen to the customer and give them what they want. They are doing that, Costco is doing that, TJX is doing that, Ross is doing that, The dollar stores are doing that, Burlington is doing that — go to any mall they are in, like the American Dream, every store has very few customers. They have lines longer than I have ever seen (longer than Macy’s or A&S in the height of Xmas in the ’70s and ’80s) — customers waiting to pay with huge bins full of merchandise, even early in the day. There are affluent customers, young customers, older customers, men, women, kids, — if you go to any of the stores I listed above and you look at the cars in the parking lot,… Read more »
1
|
0
-   Share

The Daily Question seems misleading … meaningless? Of course a business can grow (without “ecommerce”) if it’s starting from nothing; the real question is “would it grow faster with ecommerce?”

Having now boldly staked out the territory, I’m going to retreat, and leave others to answer. The thinking, presumably, is that low-cost models don’t really work online since the picking/delivery costs can’t be absorbed by the pricing; and a similar lack of enthusiasm on the part of competitors (TJX, et al) gives credence to this idea. But who can say for sure (unless — or until — it’s actually proved wrong).

Braintrust
"I think with the novelty of the whole operation, NOT having e-commerce might actually benefit them, IF they stay small that is."

"Primark has a combination of product, presentation and pricing that is compelling. Better than Target. Way better than J.C. Penney."