Patagonia wants to ‘Vote the a**holes out’ 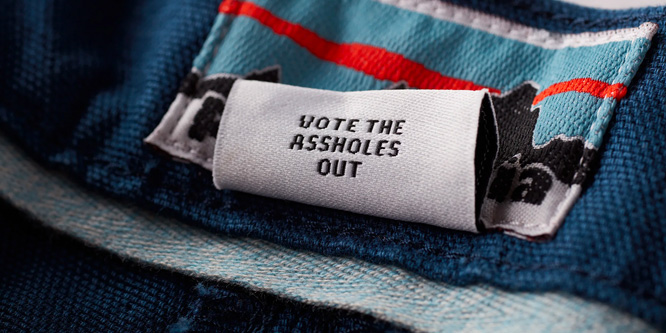 Patagonia, known for its environmental roots, added the message “Vote the a**holes out” to the back of label tags on some products as a statement against climate change.

In an interview with the Adventure Journal, Patagonia’s media team said the phrase was only used on a limited edition of shorts and explained as “having some fun in these dark days.” But its use drew major attention on social media and media outlets in the midst of election season.

Founder Yvon Chouinard has long used the phrase. Patagonia said in a media statement, “It refers to politicians from any party who deny or disregard the climate crisis and ignore science, not because they aren’t aware of it, but because their pockets are lined with money from oil and gas interests.”

Patagonia followed the controversial tags with an email sent on Friday linking to its new microsite that likewise broadcast a “Vote Climate Deniers Out of Office” message. According to the Los Angeles Times, Patagonia this year will be making 22 “recommendations” for the 35 Senate seats available in November based on the candidates’ stances on climate change, public lands and environmental justice.

Patagonia has become increasingly involved in politics as the Trump administration has aggressively weakened federal environmental regulations. The company’s moves included suing the administration, endorsing senatorial candidates for the first time and leading the move of Outdoor Retailer, the outdoor industry’s largest show, out of Salt Lake City.

Like others, Patagonia is implementing measures to support voting in the upcoming presidential election, including closing its doors on Nov. 3 and for the first time and providing up to four days of paid time off for employees who volunteer as poll workers.

Most retailers and brands appear to be staying non-partisan in their get-out-the-vote pushes. Nike and Starbucks both referenced the racial injustice protests in calling out the importance of voting.

One partisan effort is the launch of the “Believe in Better” collection by 19 prominent American designers, including Vera Wang, Joseph Altuzarra, Victor Glemaud and Tory Burch, to support Joe Biden’s bid for president. It’s available at joebiden.com.

DISCUSSION QUESTIONS: Do you see more risks than benefits to Patagonia’s move to elevate its political messaging amid the election cycle? What factors should determine whether a brand can take a stand in an election?

Please practice The RetailWire Golden Rule when submitting your comments.
Braintrust
"Patagonia will clearly appeal to the more politically motivated buyers in their base, but using the language chosen may also offend fringe buyers and even some of the base."

"A brand, as a private, non-governmental entity, should take whatever stance it wants in an election."

"Good move for Patagonia, although I cringe slightly as I, um, “ripen,” and wish for something more inclusive and less, well, hostile, in an effort to bring us together (ha!)."

41 Comments on "Patagonia wants to ‘Vote the a**holes out’"

For Patagonia, the message and audience are well suited, and so this initiative is very consistent with their brand. However there is significant downside in making too strong political statements when part of the market won’t agree. I admire companies like Patagonia who stand up for what they believe in, but in general politics and retail are not a good mix. Ultimately this comes down to the beliefs of management – they are responsible for the direction and results.

I completely agree with you, Mark. Patagonia’s loyal customers will stick around if they have the same beliefs and the brand might attract new customers who admire brands taking strong stands as well. It is a risky move and takes guts but such brands know what they are getting into.

Many consider companies that want to protect the environment as noble businesses. Some call them (derisively) “tree huggers.” Everyone has an opinion. Political issues should be decided by the electorate, not by businesses. Some think that businesses should not be allowed to contribute to political campaigns and some welcome the contributions. It would be a lot simpler if Patagonia, REI, and so many others sang the praises of outdoor activities and respect for ecology without turning the message into a political one.

I believe businesses should not be allowed to contribute or lobby for the government to reap benefits for them. (Note, if I am a CEO, I will take every advantage allowed.) The fact is businesses are not citizens. Their objectives and desires are not in line with the citizenry. They would and should chose actions and activities that are good for them and not good for the people or the country. (No, companies are not patriots.) We should have listened more seriously to Eisenhower’s farewell address.

We agree. By the way, I don’t remember seeing so many thumbs down on a single discussion topic.

Patagonia understands its customer base and is staying true to its brand. I don’t see a downside.

Patagonia knows their core customer and this messaging will have little, if any, downside to the brand. The company is bold, courageous and unapologetic.

There is a fine line between retail and politics. While this probably works for Patagonia, I don’t see Walmart, or Kroger, or Nordstrom doing this and getting away with it with the public. It is a good way to possibly drive away a large chunk of your customer base. Regardless, if you are going to do it, you can’t flip flop – you have to stand by it 1000 percent.

In any campaign — marketing or political — there is always a choice between messaging that galvanizes the base but that may put off buyers/voters who are more neutral on an issue. In this case Patagonia will clearly appeal to the more politically motivated buyers in their base, but using the language chosen may also offend fringe buyers and even some of the base. Net, negative.

Given Patagonia’s customer base, I don’t think this will cause any damage. In general, corporations have a right to campaign and support whatever political causes they wish – just as individuals do. However for those with a diverse range of customers the best policy is to steer away from becoming overtly party-political as it risks offending one group or the other.

Patagonia knows their customer base. They are not going to do something that would be business suicide.

Brands serve their core constituency. That’s why these kind of campaigns, while they look too risky at times, work because they are in line with the brand voice. The campaign does not alienate their core consumer base, is safe and, if it galvanizes them, is a win. On that count, this one by Patagonia is a win.

I love the position that Yvon Chouinard takes when it comes to sustainably sourced apparel and environmental issues. I love that he’s an activist. I support companies taking a stand on issues they believe in and that align with their core values.

Will this message resonate with Patagonia’s core customer? Maybe, probably, I think so. That said, a message like this is divisive. It doesn’t contribute to respectful debate. It’s going to alienate some segment of their customer base, and it makes Patagonia and their position a target. Sadly the target won’t be the merits of their position, it will be wording of this message. I don’t think that will do much to further the position they support.

Patagonia knows their customer base as well as the best retailers in the world do. This is specifically targeted to their customers while also getting a little buzz in the media. However other brands should tread lightly with this type of overt message – it’s not for everyone.

Although I wholeheartedly agree with the sentiment, it is a risky one to place on their products. Time will tell whether it resonates among their most active shoppers.

Definitely more benefits. While it’s a gross (and incorrect) generalization to say that all outdoorsmen (and women) are liberal, it does reflect the company’s values.

Let’s not forget that Hobby Lobby put up a pro-Trump display which was reported by Newsweek as being spotted at one of its stores. A photo of a display reading “USA vote Trump” in decorative letters was shared in a tweet that has now gone viral.

Let’s say that it’s awful that everything, including the wearing of masks, has been politicized and weaponized — but truth be told, I haven’t taken a meeting with Hobby Lobby in seven years, so I guess we do many things based on our values. And I am happy to shop at Patagonia, even though I am not remotely an outdoorswoman. Just as the only thing I can do about Hobby Lobby is buy elsewhere and not give them any free press.

This is a dangerous game. But these guys know their customers and the action will likely endear them more to their most loyal customers.

The noise generated by the “Vote the a**holes out” message may even bring in some like-minded customers who never thought of Patagonia on a regular basis.

But net/net, I would advise any company to tread lightly in this area.

I’d say there are few retailers other than Patagonia who are so consistently known for their position on certain issues that can manage to pull off something as brazen as this and not see a negative impact. Certainly would not expect to see a Walmart, Target, or Kohl’s do this.

As I said to the Washington Post about the Colin Kaepernick ad a couple years ago, “This is completely in line with who Nike is and what they stand for. That authenticity resonated and will continue to resonate with their customers.” Frankly, who couldn’t agree with this sentiment no matter what side you’re on? There’s no controversy here. Playing it safe never makes you money.