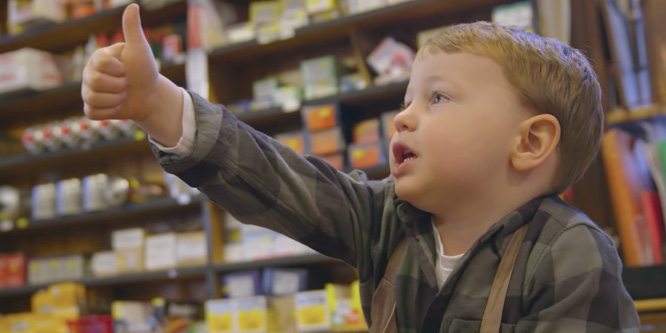 How does a small hardware store in Wales with fewer than 3,000 subscribers on YouTube generate over 2.5 million views of its Christmas commercial? The answer is a do-it-yourself success story.

The store in question is Haford Hardware, located in Rhayader, Wales. The commercial was shot by the store’s owner, Tom Lewis Jones, and stars his two-year-old son, Arthur, who plays the shop’s keeper in the two-minute spot.

“Arthur comes to the shop most days to see me. The stuff you see him doing in the video isn’t out of the ordinary,” Mr. Jones told Wales Online.

“He was so good. They say never work with animals or children but he was a joy — I’m bursting with pride.”

Haford Hardware’s spot is focused on family, and that certainly makes perfect sense when you consider that the business, which first opened in 1895, has been passed down through the generations ever since. Mr. Lewis runs the store with help from his wife, young Arthur and his grandparents. Four generations of the family appear in the spot.

The commercial was produced on the cheap — around $132 U.S. out of pocket — with the biggest expense coming from a licensing fee paid for music. Mr. Lewis and Josh Holdaway, a filmmaking friend from college, shot the commercial over the course of a day.

DISCUSSION QUESTIONS: What do you think retailers can learn from the success of Haford Hardware’s 2019 Christmas commercial? Should family-owned retail businesses in the U.S. try to work the same magic as Haford Hardware?

Please practice The RetailWire Golden Rule when submitting your comments.
Braintrust
"Companies that try to mimic this approach will quickly find that recreating lightning in a bottle isn’t easily accomplished. "

"U.K is far more localized than the U.S. and that helps this kind of marketing cut through on a national scale."

"Somehow doing the same commercial in a True Value store would not have the same impact."

This just goes to show the power of thinking and ideas is everything. The advert is thoughtful, well-executed and conveys a message that resonates with many people. However it also works because Haford Hardware is authentic: it’s a well-run, family business that’s focused on the needs of the local community. So the whole thing comes off as genuine.

Could this work in the U.S.? Sure, independent retailers could use this approach and it may work well at a community level. However, the U.K is far more localized than the U.S. and that helps this kind of marketing cut through on a national scale. That’s often much harder to accomplish across the expanse of the United States.

The Haford’s spot shows that it’s not necessary to spend millions to make an impact. Telling a compelling story doesn’t take money – it takes a good storyteller. But companies that try to mimic this approach will quickly find that recreating lightning in a bottle isn’t easily accomplished. There’s an alchemy to creating viral success, but it’s an ever-changing formula.

The magic of kids/family, good music and a simple idea brings it home in this spot. It proves that you don’t need expensive productions of reindeer with their noses lighting up in every expensive car commercial during the holidays. I think many people yearn for the days of being close to your family and talking about memories of when you were a kid with your own kids and grandkids. Kudos to the Jones family. They nailed it.

Wow. Like all of the very best commercials, this one has heart, wit, and a message that’s crystal clear. Bravo!

Best commercial in my mind I’ve seen in many years. That little boy was me when I was four years old cleaning shelves and helping customers. Boy things certainly have changed over the years, and I’m grateful to have grown up working beside my dad, and my mom as well. Fifty-eight years later it still makes me smile to think how special it was to be in a family business and learn the real life skills all of us need in life, not just business. Thanks for sharing this, and I will forward this to my friends today.

Tony, I did the same thing as a young child. Waited tables, bussed tables and acted as the cashier when my dad and mom were busy helping other customers. The customers were like family, so if I made a mistake in their favor as the cashier they would always tell me about it and return the money. I often miss those days and people who were an integral part of my past.

This winning spot resonates with emotional storytelling about personal relationships (vs. retail products). Haford Hardware stands out by emphasizing the family’s legacy of serving their community with pride and integrity.

Two-year-old Arthur is scrumptious (love the questionable wrapping job and thumbs-up) and this version of Forever Young is the perfect soundtrack to tell Haford Hardware’s story at Christmastime.

This ad proves that small companies can achieve big results when they inject emotion into their marketing.

It’s hard to capture lightning in a bottle but they did a fabulous job of executing one big idea. I expect competitors in the U.S. to consider this and if I were a local hardware store I might try something similar. The key is being authentic – it’s the grownups’ thumbs up that truly makes the spot. I doubt 99 percent of indie retailers would come up with such a spot because they would second-guess the message and want to put some screamer deal in the middle of it because they heard a guy somewhere say that was the only way to track it. Retail marketing, in general, has a long way to go but when you aren’t tied to attribution – like this shop – you find the world gives you all the attribution you hoped for.

Another incredible commercial this year from Haford Hardware. This ad brings the imagery of a classic hardware store of hard work, helping customers, touching music and family together in a very authentic way.

Independent retailers in the U.S. could definitely develop their own story-based advertising for the holidays. But it has to be true to their business and not simply another version of this ad. Independent retailers have many stories to tell as many of them are family-owned for decades and have a longer-term perspective on their business and the importance of long-term customers.

I personally hope that independent retailers see this ad and it sparks some creativity and motivation to create a DIY ad for their store.

This was one of the best, if not the best, I have seen. Like Tony said, it tugged at my heart and took me back to my early childhood when I went to work with my father in his store. Probably the most meaningful and memorable of times. I would not trade those memories for anything. Thanks to young Arthur for making my day. We can cancel the rest of the holiday commercial contests. We have the winner.

Everyone loves a good story and, as Haford Hardware has proven quite effectively, it doesn’t take a multi-million dollar budget to capture magic in a bottle. Sometimes the best things in life are free, or in this case “nearly free.” Authenticity and a sense of purpose matters, however the challenge is how to come up with a catchy advertisement that resonates with the masses.

It’s very encouraging to see a local community-based mom and pop operation strike gold with this one. With shoppers seeking an escape from always being connected, people want to reconnect with their local communities. Budget constraints aside, these sorts of messaging techniques could really resonate via social channels such as Instagram, where you could scale at a fraction of the cost of a paid TV advertisement.

The reason it works is it’s simple, cute and makes (most) people smile. And one other thing. It’s a local store doing a local video. The video has a local feel. That’s key, too. That’s an advantage to being a smaller local retailer. It’s hard for a major brand/retailer to give that hometown feel.

Could this type of commercial be done in the U.S.? The answer is yes, but to replicate the smiles it brings would not be easy. It has a great story to tell, a very adorable child, and iconic neighborhood store setting. Somehow doing the same commercial in a True Value store would not have the same impact.

Saw this in real-time when I was in U.K. last month. Authenticity is Everything! #BeYourBrand!

Kids in grown up roles have always been popular. The “When I Grow Up” Super Bowl ads from 1999, for example. Cost $4MM to make and was a significant factor in turning Monster.com from a $40mm company into a $1B one.

The magic is about going viral and that’s where it becomes a challenge. The Haford commercial really brings out heart, caring, and dedication — something that all retailers are chasing through personalization and other ways. Those who have it and can harness it for public consumption will have the advantage.

There was a time when lots of different retailers could tell versions of this story … not just small and not just family owned. A story about feelings and authenticity. Something genuine. Something with some humanity. It’s not about consumption. It’s not some desperate plea to “buy my stuff, puhlease!” This commercial is only tangentially about Christmas, which is what I think gives it its depth.

The cool thing is that major chains could do exactly the same kind of ad. Imagine that!

What do the Christmas commercials that resonate have in common? They all tell a good story. And it’s often one that we can personally relate to either in terms of the sentiment, the setting, the participants, or the emotions. Haford Hardware has just proved that what you have to say is more important than how you say it — you don’t have to have masses of bells, whistles and budget if the message is authentic. Retailers can certainly learn from it but they shouldn’t try to emulate but apply that learning to their own brand.

Braintrust
"Companies that try to mimic this approach will quickly find that recreating lightning in a bottle isn’t easily accomplished. "

"U.K is far more localized than the U.S. and that helps this kind of marketing cut through on a national scale."

"Somehow doing the same commercial in a True Value store would not have the same impact."