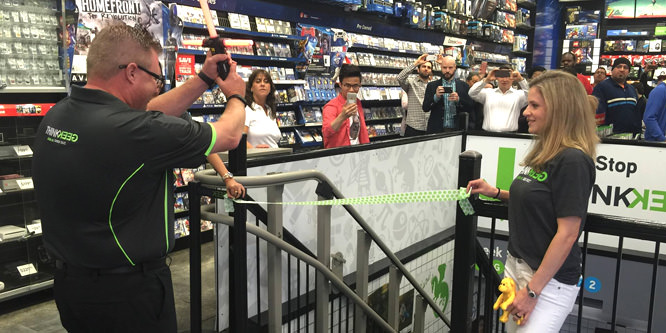 Since GameStop’s August 2015 acquisition of then pure-play e-tailer ThinkGeek and its parent company Geeknet, the company has transformed the online world’s foremost purveyor of licensed merchandise and collectibles (what gamers call “loot”) into a successful brick-and-click hybrid. Since last year, the company launched four brick-and-mortar locations. Now, ThinkGeek plans to dramatically increase its brick-and-mortar presence by opening 25 more stores in the U.S. this year and 25 more internationally, under the moniker Zing Pop Culture.

In an interview with RetailWire, Mike Mauler, EVP and president of GameStop International, explained the instrumental role that the storefronts have played in helping the company take “loot” sales to the next level.

“Nobody really goes online looking for a Star Trek pizza cutter, but you go into a ThinkGeek store and you see one and you just gotta have it,” said Mr. Mauler. “We see that a lot. A lot of impulse purchases. A lot of people interacting with the product and having fun. The kind of thing you really can’t do simply by going on a website to look for something specific.”

ThinkGeek is also committed to creating a seamless omnichannel experience for its customers including:

Mr. Mauler described a shift over the past few years in how customers interact with licensed merchandise and how media companies emphasize it. He used Game of Thrones as an example.

“Now people will go into a ThinkGeek store and have a season premiere Game of Thrones party and buy coffee mugs and shot glasses and t-shirts, so consumers are really embracing a different way to experience the [intellectual property],” said Mr. Mauler.

ThinkGeek stores have also allowed GameStop to reach new demographics. The percentage of female and family shoppers at ThinkGeek stores is 60 to 65 percent, as opposed to only 35 to 40 percent max at GameStop outlets.

Mr. Mauler said that the company predicts a billion dollars in sales within the “loot” category for GameStop by 2019.

Please practice The RetailWire Golden Rule when submitting your comments.
Braintrust
"This success is also about the craving that people have to interact with other people, especially those who are like-minded."

12 Comments on "Once e-tail only, ThinkGeek expands brick-and-mortar presence"

This success is also about the craving that people have to interact with other people, especially those who are like-minded. The like-minded dynamic gets mirror neurons firing, which subconsciously fuels the impulse purchase dynamic!

While ThinkGeek serves as a cute example of the continued relevance of physical stores, retailers such as Amazon and Bonobos are moving fast into more mainstream categories: books, electronics and fashion.

Counter to intuition, The DNA of many e-tailers actually fits running modern physical stores much better than the DNA of old-fashioned, pure brick-and-mortar retailers. Amazon, for example, could easily build a physical store with no inventory of its own. Bonobos is already there. Best Buy, on the other hand, would probably never even dream of implementing such a winning concept.

Perfect — “The DNA of many e-tailers actually fits running modern physical stores much better than the DNA of old-fashioned, pure brick-and-mortar retailers.”

The Etsy pop-up store in Macy’s in NYC obviously is a pilot of the pure-play’s long-intended move into physical retail. In tracking Etsy, I’ve imagined that the local artisans would be great free labor in some locations, but of course Etsy has also expanded its assortment of “factory goods” vendors, so that might not play.

We’re seeing the new look of retail — fewer stores that are more engaging. There’s a Rent The Runway store in Georgetown where customers can check out the fit of various designers before renting. Imagine how this trend could affect traditional mall retail by having fewer stores with immersive customer experiences.

ThinkGeek has created a fun and exciting retail experience for like-minded individuals. I’m not surprised it’s doing so well. I do agree that interacting with people and being able to experience a product before buying it is a major selling point. Early on ThinkGeek encouraged interaction with their customers online. One of the reasons ThinkGeek brick-and-mortar stores have been so successful is because they built an online community which has since transitioned into a successful brick-and-mortar community. Other e-tailers should follow ThinkGeek’s approach to building a community.

GameStop has been confounding both retail and financial analysts with its ability to embrace cloud gaming in its physical stores. Now it is doing the reverse with ThinkGeek. The key is that GameStop management begins with the core customer benefit of actually being “experiential” and then retrofits the customer experience to that. Whether it is online or physical, that’s their real competitive advantage.

Since ThinkGeek has a fresh start to its in-store infrastructure, they have a clean slate as they are not dealing with legacy technology. This enables them to design their stores, and the supporting technology, for today’s customer that wants the ultimate flexibility to buy anywhere and fulfill anywhere.

There is a growing trend of e-commerce companies opening brick-and-mortar stores: Amazon, Google, eBay and now ThinkGeek. These companies are realizing that many consumers enjoy the theater of shopping and, for some products, engaging five senses instead of two has a dramatic impact on impulse purchases. Online retailers with products that consumers like to try on, touch and test, are logical candidates to open retail stores. Considering some people predicted the demise of physical stores, it is interesting to see the continued demand for brick-and-mortar shopping. It keeps retail interesting!

Success for brick and mortar retailers, whether their background is click or brick, comes down to delivering a shopping experience, not just fulfillment. To an extent, e-commerce retailers have no baggage of processes; they can implement click-first-then-brick and deliver experience plus products much faster and more agile than traditional retailers bound by “same store sales” metrics.

I’m a Treker. My son is more Star Wars. I’m DC, he’s Marvel. I discovered ThinkGeek many years ago and I can say for sure, if I saw the Enterprise pizza cutter in person, I would have owned one (prior to my wife slipping it into a tag sale inventory).

I loved this mash up when I first heard about it and the results make total sense. It’s kinda perfect if you think about it. (See what I did there?)

I think the bigger story here is online/in-line retail integration. I think we are going to see more of this, not so much Amazon opening its own stores but Amazon buying The Gap (or the like) to learn that side of the business and vice versa.

I like the innovation onliners are bringing to in-line stores, but for it to really matter, it will have to be done at scale. And it looks like GameStop/ThinkGeek is ahead of the game.

The obvious benefit of pure-play e-tailers transitioning into brick-and-mortar is spelled out by Mauler: impulse purchases. However, the benefits can be far-reaching — so much so that new benefits might not even reveal themselves until the experiment is well underway. The key is collecting valuable insights on marketing, merchandising, sales, and more to not only improve a brand’s physical store presence, but also their online presence.

What this example teaches us is the importance of the overall customer experience with a brand. Customers want to build relationships with brands and that relationship may need to extend across more channels than just digital ones. It really is about the brand DNA. For things like loot that have lot of impulse purchases for “kitschy” items that stand out more in the physical world, having a physical store can be an important part of the customer relationship. In cases like that, the omni-channel approach is imperative. Similar industries like food & grocery, where touching and feeling products is essential, will never be able to completely move away from physical stores. Alternatively, pure play online retailers like Farfetch in apparel can build successful businesses without a physical presence. Eventually, like the Warby Parker’s and Rent the Runways of the world, they may decide an investment in a physical presence is worthwhile. With functionality like “buy online, return in-store,” and “click & collect,” a retailer can increase the number of interactions with a customer and thereby… Read more »
1
|
0
-   Share

Braintrust
"This success is also about the craving that people have to interact with other people, especially those who are like-minded."