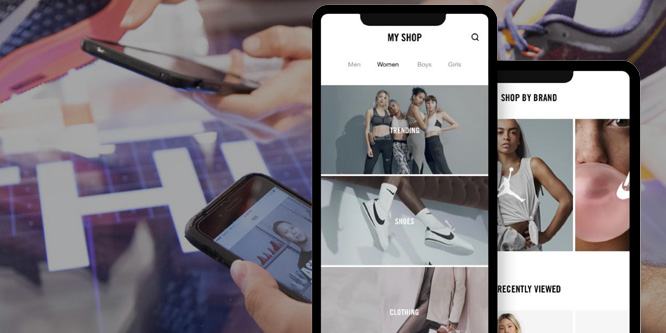 The standard defense to the “Retail Apocalypse” is research showing that online sales still make up less than 10 percent of all retail sales. But Nike just joined a growing crop of brands that now expects over half of its sales to eventually originate online.

On its second-quarter conference call last week, Andy Campion, Nike’s CFO, noted that at its Investor Day last October, Nike predicted that online revenue — both from its own and wholesale partner websites — would generate about 30 percent of its sales by 2023, up from 15 percent currently.

Mr. Campion added that Nike is “already thinking bigger” and eventually expects online sales to surpass those from stores.

According to Internet Retailer data, the books/music/video category had the highest e-commerce penetration in 2017 at 70.1 percent of sales online, followed close behind by office supplies at 65.9 percent. Computers/electronics is a far third at 27.6 percent.

Depending on the source, between 15 to 25 percent of apparel and footwear is now bought online in the U.S. Among retailers in that space indexing higher are Nordstrom, with 30 percent of its sales coming online, and Urban Outfitters at 40 percent.

Both Nordstrom and Urban Outfitters have invested aggressively to boost their online reach as has Nike. Nike has added a variety of notifications to its mobile apps to enable access to launch product; deepened partnerships with Tmall, Zalando and Flipkart overseas as well as Amazon in the U.S.; opened a number of stores driven by mobile engagement; and recently added shopping through Instagram, Google Assistant and in-store mobile pay.

Said Campion, “As we increasingly innovate and lead with digital, we are intentionally disrupting our industry. We see this as positive disruption that widens the aperture for growth long term.”

DISCUSSION QUESTIONS: Does it make sense for a category such as Nike’s to eventually see more online than offline sales? What characteristics do the categories share that significantly over-index in online sales?

Please practice The RetailWire Golden Rule when submitting your comments.
Braintrust
"With its online strategy it’s easy for customers to Just Do It."

"Selling isn’t the Holy Grail — keeping is. Until the customer tries it physically on her foot or back, the sale is incomplete."

"A better question to ask might be: how do we measure the broader experience to reinforce the brand, basket sizes and customer lifetime value?"

The increase in online sales has as much to do with consumer behavior as anything. Online shopping — and from a mobile device — is increasing at a significant rate. Companies like Nike recognize the shift and are doing a magnificent job of adapting. The space is competitive, and keeping customers loyal in online and offline channels is paramount to the continued success of any brand.

Nike is the perfect social and sports media brand and should continue to grow exponentially online. Gone are days of needing to “try on” footwear. Investments in logistics and distribution reduce any buyer hesitancy or buyer remorse. With its online strategy it’s easy for customers to Just Do It.

The perfect explanation for the growth of online: “it’s easy for customers to Just Do It.”

I totally understand the e-commerce penetration of some of categories mentioned. There are no fit or sensory issues involved in these purchases. Very little if any emotion. If the retailers that are already experiencing significant e-commerce penetration have figured out the fit/sensory issues and the attending return/restocking issues AND are making money in this channel, more power to them. It would be great to hear some data and commentary to support this.

So what is the definition of “originate”? I see a pair of shoes in person (untraceable), and then I engage online to learn more (traceable), and then purchase in-store (traceable)? As long as that “experience” is consistent and optimized channel to channel, the origination component seems moot. Also, it’s quite a fascinating PR spin from a company that has garnered significant press from investing heavily in stores.

I don’t disagree with Nike, the proportion of sales made online will continue to grow. However, the narrative that online will destroy physical retail is as mistaken as ever. As Nike’s own investment in fantastic new stores shows, physical is changing but it is still highly relevant and forms an important part of the retail ecosystem.

As for books, music and movies: the intangible nature of the product and the dire approach to retail by physical players in those sectors is why online penetration is so high.

Years ago when my wife first discovered Zappos apparel, I quoted her on RetailWire, “why would anyone go to the a store anymore?” Certainly she occasionally goes to a store, but by her estimate 75 percent to 85 percent of her apparel purchases are online.

I agree that we are standing on the beach watching a huge wave of change coming in online sales and delivery services utilization. That being said, customer satisfaction with product is the most important issue, followed by smooth no-hassle product delivery. In categories where fit and comfort are tantamount to satisfaction, I wonder if we will find larger purchases of multiples of the same items, which in turn will create even more returns pick-up services. Even so, change is coming.

While I’m not some Luddite thinking online will not be important, saying online will eclipse offline isn’t the point. No one has yet been able to figure out how to lower the return rates for online, reported as up to 50 percent while brick-and-mortar are at about 6 percent. Selling isn’t the Holy Grail — keeping is. Until the customer tries it physically on her foot or back, the sale is incomplete.

The transmutation of physical to digital retail is very category dependent. All verticals have experienced it and over time, some will have a more profound change than others–video for example.

Nike’s products trend towards users that are more digitally savvy and given the brand’s reputation, that poses a low risk to consumers concerned about getting burned from online purchases. So from both a category and brand perspective, Nike is well positioned to make this happen. Couple that with its previous pull-back from lower tier retailers and the company’s strategy is very clear: digital supported by a managed set of quality retailers maintains brand equity and customer experience. It’s a lesson others can learn from, especially with the Amazon Marketplace panacea that seems to be taking hold.

Well summarized Ken. Nike seems to have thought this through on many levels.

It is also helpful that Nike has done an extraordinary job of simplifying the user experience online and within its assortment. There are only a handful of clothing brands where sizing is as consistent as it is at Nike. I’ve been wearing the same apparel and shoe size within the brand for more than 20 years. This ultimately adds to consumer confidence in the brand, especially within the realm of online ordering …

Online, offline, for a lot of products these terms are only meaningful insofar as where the final order is placed (and even then the fulfillment of that order could be in-store, from a store, etc.) but the shopper’s journey probably has gone across all of these “channels” and more prior to that order placement. Thus “unified commerce” is probably a better explanation of that shopper journey than “online/offline.” In the case of Nike though there is the aspect of limited edition, high demand items with a dedicated shopper willing to “buy anywhere” to get one. Nike will successfully sell those out wherever they place the product. The question becomes, do they want to support their retailer distribution network with that revenue, or pocket it all themselves? I suspect their retailers would prefer to see that traffic driven through their online/offline networks. For the rest of the product lines, I’m sure that “online ordering” will increase to industry averages. As others have commented; standard sizing, low risk transactions — why walk for shoes, when you can… Read more »
1
|
0
-   Share

Why does it have to be online or offline? It’s all part of a unique experience Nike is creating that brings together the two worlds. Using the app in-store; trying on product and purchasing online; purchasing online and picking up in store. All are value add experiences that are no longer channel specific. A better question to ask might be: how do we measure the broader experience to reinforce the brand, basket sizes and customer lifetime value?

Nike has been committed to digital for so long and (mostly) so strategically, its expectations are well founded. Contributing is their “twelve cities” global retail strategy, which is predicated on — and a driver of — its online business. Given its global brand strength, if it is only focused on direct retail doors (not counting outlets) in twelve markets. that leaves the rest of the world to either be a digital customer or an indirect one.

While there are categories that over-index in online versus offline or more realistically, omnichannel, the drivers are the commoditization of the category and products and the customer experience. Nike has a very good digital shopping experience and most of its wholesale customers don’t, though Nike is editing those customers and raising its expectations and standards for those remaining.

Nike is doing what a leader does: it’s leading.

It is all about convenience and product assortment. For products like athletic shoes, there are an enormous breadth of product options and physical stores can only carry a fraction of the options. If you are very selective in what you want, it is often difficult to find it at your local store. By ordering online, you can select the perfect color, size and style for the entire inventory of products. Online ordering also saves a trip to the store and battling traffic at a mall.

The product categories that are over-indexed today or will be in the future are commodity products that are easy to select online, hard to find products, and products that consumers don’t need to touch, feel, or try.

Some of this is due to consumers’ changing shopping habits and some is due to improved technology. And some of this trend is because retailers are panicking and devoting extra attention to their e-commerce business, at the expense of stores. I know of one department store retailer who is offering better deals online than off and offering extra incentives to shop online, while losing money on free shipping and trying to save money by failing to spend on upgrading their stores. This may be penny wise and pound foolish, as shoppers will be less enthused about getting out to explore physical stores as the experience deteriorates.

One interesting component of this story is that Nike has focused their digital investments on commerce through their apps. The SNKRS and Nike apps offer category leading mobile shopping experiences while Nike.com has changed little in several years. Nike’s done a good job of seeing where their young, mobile forward consumer is heading and investing to meet them there.

Braintrust
"With its online strategy it’s easy for customers to Just Do It."

"Selling isn’t the Holy Grail — keeping is. Until the customer tries it physically on her foot or back, the sale is incomplete."

"A better question to ask might be: how do we measure the broader experience to reinforce the brand, basket sizes and customer lifetime value?"