Nike expects sales to take off with launch on Jet.com 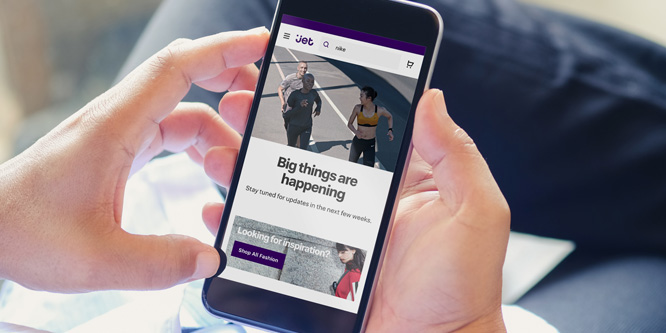 Nike surprised some last year when it agreed to sell directly to Amazon.com and did it again last week when revealing a partnership with Walmart’s Jet.com.

Both moves drew attention because of Nike’s reputation for diligently protecting its brand image and its commitment made last November to drastically narrow its wholesale customer base to focus on those offering “differentiated” retail experiences.

Nike’s move to Amazon, first revealed in June 2017, was at least partly driven by a quest to better police counterfeit sales from third-party sellers on the platform. Nike also gained greater control of messaging and access to consumer purchasing data. Many observers felt Nike couldn’t pass up the potential sales boost, particularly with Sports Authority’s exit from the marketplace.

By December, Nike had expanded the limited test, and Mark Parker, Nike’s CEO, said on an earnings conference call in June 2018 that the Amazon partnership was “progressing well.” He added, “We remain focused on elevating consumer experience on the platform.”

Appearing broader, the October launch on Jet will feature “hundreds of products across apparel, footwear and accessories,” according to Jet’s press release announcing a broad relaunch.

One major shift in Jet.com’s relaunch is a narrower focus on affluent, urban Millennials with a concentration on local brands and messaging.

A second is a focus on “tailored shopping,” or delivering “different experiences” not only for browsers looking for grocery items versus apparel, but to individuals seeking Nike products across yoga, basketball, fashion or other segments.

“What [Nike’s] done with other folks online is a mere assortment of basics,” J. David Echegoyen, Jet.com’s chief customer officer, told Business Insider. “What you’ll see is a lot more understanding of how the customer interacts with Nike, what they see in Nike, and how we can bring it to life on Jet, creating a canvas that allows those brands to connect with customers.”

Nike also gets a dedicated page, apparently similar to one found on Amazon-owned Zappos.

DISCUSSION QUESTIONS: Do you see any issues with Nike selling directly on Jet.com’s revamped website with the platform’s connection to Walmart? How would you assess the benefits versus risks for Nike in partnering with Jet.com versus Amazon?

Please practice The RetailWire Golden Rule when submitting your comments.
Braintrust
"Nike’s partnership with Jet.com both benefits from Walmart’s efforts to make it upscale and lends credibility to those efforts."

"While the trade is extremely conscious of Amazon and Jet.com being a “different” distribution channel, to the millions of online shoppers it’s simply another retail option."

"People buy Nike for the brand, not the shoe. The Jet.com deal fits in with Nike’s goals for online growth and Nike is a global brand."

14 Comments on "Nike expects sales to take off with launch on Jet.com"

I can see some loyal Nike fans having some issues with the company doing what may appear as if they’re selling out but the fact is it’s a different world out there today, and companies must do whatever they can to survive. Selling products through Amazon and Jet.com can provide Nike with a vast customer base and most likely strong sales. Perhaps in time, Nike will figure out a product strategy of where to offer which of their products and still be able to maintain brand quality. Only time will tell how beneficial these partnerships will be, but most likely Nike will find them profitable and continue to be a successful company.

There has been discussion about brand dilution when selling on the Jet.com marketplace or on Amazon, but Nike’s decision to join apparently renders it moot. When a brand as distinctive and recognizable as Nike agrees to make itself available through this platform, other companies will follow suit.

Yesterday we had the discussion related to whether Amazon could successfully go downmarket. Today, this is the reverse: can Walmart go upmarket? Is Jet.com the path to upmarket for Walmart? It increasingly looks like it is. It’s clear that higher-end brands still see a big stigma attached to selling through Walmart, as the recent flap over outdoor brands demonstrated. But with Jet Black and some of the other things that Walmart has done with the brand, it seems like Jet.com has escaped that stigma. So, I go back to what Nike fundamentally is: a brand. While they have made enormous investments in stores and reaching directly to consumers, ultimately, any channel where they sell Nike is going to at least accrue sales directly to Nike. Whether that’s good for the brand or not — well, that was why Nike decided to engage with Amazon in the first place, to try to get them to be more active against counterfeiters. In the end, I think Nike’s partnership with Jet.com both benefits from Walmart’s efforts to make… Read more »
2
|
0
-   Share

Could there be differentiated assortments curated for Jet and Amazon that don’t alienate Nike loyalists? Perhaps. Can Jet and Amazon provide faster, broader reach? Most definitely. Do the benefits outweigh the risk? Absolutely.

Jet is now focusing on exactly the type of shoppers that Nike sells to. As such, this partnership is not so much of a surprise. Yes, Jet is owned by Walmart but I am sure Nike understands the point of different brands – after all, it owns many brands itself.

As long as Nike can maintain its brand image and pricing, I think partnerships such as those with Amazon and Jet.com are valuable for Nike and will generate great results. Brands in all market segments and verticals need to diversify their distribution channels and be close to their clients wherever they shop.

Nike’s selling on Jet.com will expand its market presence as Walmart is moving its image to more upscale products (this is not your grandmother’s Walmart any more!). Nike is such a well-known brand that it should not detract from that image as it expands to a larger retail buying presence through outlets like Amazon or Jet. I expect the Nike experience at Jet will be innovative to grab the consumer’s attention, and it will become another opportunity to touch a new set of shoppers. The only downside risk is that the brand becomes diluted as it continues to expand to new targeted shoppers based on the Jet demographic. Given its strong image, this risk should be limited.

People buy Nike for the brand, not the shoe. The Jet.com deal fits in with Nike’s goals for online growth and Nike is a global brand. Nike is a master at co-optition, where they compete in the same markets they distribute. For them, the data provided by Amazon and Jet combined with experiences and marketing make these partnerships attractive. Nike can selectively manage products in the marketplaces. It’s 30,000+ retail partners selling Nike shoes and apparel. Nike is one of the most iconic brands in the world. It is also a top retailer running almost 1,000 stores worldwide. Nike’s online business was around 3 percent in 2015. Nike plans to grow this through partnerships and their own direct-to-consumer options. The risks for Nike are limited — their marketing spend will continue driving demand. Customers will buy Nike wherever it’s most convenient, and Nike will have direct access to customers — even through the algorithms of Amazon – because their revenue is not tied to the market, but the brand itself. Read more about the Nike… Read more »
1
|
0
-   Share

What marketer in his/her right mind would ignore an opportunity to participate in the largest marketplaces that reach reach their target customers? We aren’t talking Cartier, we are talking NIKE.

As far as risks go, I see no worries. This is no different than Nike having a store in a city’s upscale mall and mid-market mall.

I see this as simply another channel to extend their retail reach. There is a Pepsi versus Coke war going on in the shoe industry. It’s Nike versus Adidas. Both companies are doing what they need to do to gain market share – and “foot share.” Another place to be seen and heard, Nike is grabbing an opportunity to expand their visibility.

Nike is an accidental player in the last minute play to revive Jet.com as an upscale urban Walmart. Whether Nike basics for the Amazon masses or the Nike cool PR factor for Jet.com urbanites, Nike is struggling to identify why and where Nike product distribution fits into the digital economy.

Somewhat off topic — but hey, maybe not really: while I was never particularly impressed by the “courage” of Nike’s latest venture into mixing business and politics, since I felt most of its audience was probably in agreement with it, I’m not so sure of the case with Jet. Does Jet mimic Walmart customers, who presumably might be hostile to Nike’s campaign, or is it independent? Or maybe people just don’t really care? It will be interesting to see, but if the results are underwhelming I think a lot of people will begin to think “blowback.”

While the trade is extremely conscious of Amazon and Jet.com being a “different” distribution channel, to the millions of online shoppers it’s simply another retail option.

A visit any of the large chain sports stores offers multiple brands but limited choices on the models available. Amazon and Jet.com allows Nike to offer wider selection of the brand’s models and more feasible than opening more brick & mortar brand stores.

Selling Nike products on these marketplaces does nothing to tarnish the Nike brand, as Nike products are widely available today on Amazon and Walmart.com through other retailers and distributors. The move for Nike to sell directly on these platforms is probably inevitable. If Nike is concerned about protecting its retail channels by not cannibalizing their sales, they could limit the products they sell directly on the marketplaces to product models that are exclusive to Nike branded store or Nike’s online.

Braintrust
"Nike’s partnership with Jet.com both benefits from Walmart’s efforts to make it upscale and lends credibility to those efforts."

"While the trade is extremely conscious of Amazon and Jet.com being a “different” distribution channel, to the millions of online shoppers it’s simply another retail option."

"People buy Nike for the brand, not the shoe. The Jet.com deal fits in with Nike’s goals for online growth and Nike is a global brand."