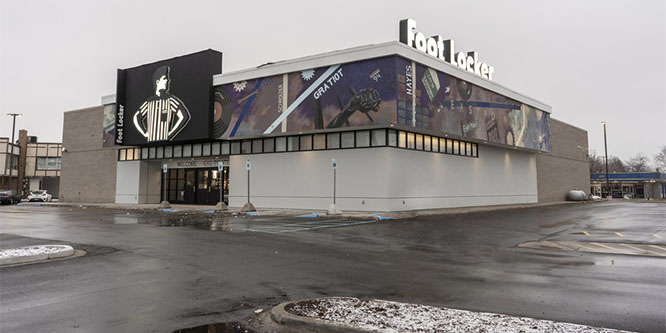 Foot Locker has long been a standby shoe store in shopping malls throughout the states. But the chain is ramping up efforts to send U.S. sneaker fans flocking to a standalone experiential store concept, a strategy that it’s already piloted abroad.

Foot Locker announced the opening of its new Power Store concept in the metro Detroit area (its first in the U.S.) last week. The retailer envisions the store as a hub for local sneaker culture, art, music and sports. The store, decorated with art from a local artist, will host community-oriented events like panel discussions and Q&As with DJs and rappers about various cultural and artistic topics. It will also feature exclusive products created by local designers geared toward an urban audience. The Power Store in Detroit is the first of 12 slated to open globally throughout 2019, with U.S. locations announced for Los Angeles, New York and Philadelphia.  Currently there are Power Stores in London, Liverpool and Hong Kong.

Many of the big shoe brands have been working to attract the “sneakerhead” subculture of athletic shoe enthusiast and collectors. Nike, Adidas, Puma and others have all been debuting exclusive and customizable products and finding new high-tech ways to turn product releases into experiential events. Foot Locker is one retailer that has joined sneaker brands in courting sneakerheads. For instance, the chain hosted an Augmented Reality (AR) scavenger hunt last year in Los Angeles for the newly-released Nike LeBron James shoe.

Even inside the mall, Foot Locker has been taking steps to differentiate itself as a retailer with the interests of serious sneakerheads at heart. The chain has begun partnering with some of the biggest sneaker and sportswear brands to open single-brand store locations. For instance, under its Footaction banner, Foot Locker operates a concept called Flight 23 which sells only Jordan-branded products.

But it’s apparent that the chain is pivoting away from the shopping mall. Last year, it announced the closure of more than 100 locations, mostly in malls that it characterized as deteriorating, according to Forbes.

DISCUSSION QUESTIONS: Will Foot Locker succeed with standalone experiential concepts in the U.S. rather than with a mall focus? What will Foot Locker have to do to keep the experience interesting for customers and are there regions where these stores might perform better or worse?

Please practice The RetailWire Golden Rule when submitting your comments.
Braintrust
"There is so much talk about personalization in the retail experience. What is more personal than your local neighborhood and culture?"

"Consider this a Foot Locker Event Center! They know how to get the customers there, it will be through our social media influencers."

"The standalone stores are large which means they will be costly to operate, and without the necessary traffic it’s doubtful they will succeed."

I think this is a smart move by Foot Locker. I don’t think it’s entirely a mall vs. off-mall issue, but rather a way to extend their brand and store experience in entirely new ways that their typical small, mall stores cannot. Based on the description of the new Power Store concept, it sounds like Foot Locker is on the right track, but ultimately it will come down to consumer response – if the new format resonates with consumers, it will be clear based on results.

I’m with Mark that this isn’t necessarily about location, but experience. The idea of showcasing local artists, bringing in performers and speakers, and stepping into more of a community role will inevitably lead to additional sales. Considering that this is the 4th store with this format, I’d say it must be working.

Foot Locker is capitalizing on what independent retailers do best: Connecting with the local community.

We all talk about the in-store experience being more than just selection and service, but in too many stores that’s generally about it. Indies know the value of consistent shoppertainment events; this is exactly what Foot Locker is doing with its local connections, panels, and visits from DJs, rappers, artists and designers. Zeroing in on a specific core customer is smart – Foot Locker is playing to its target audience.

Love this concept! One way in which traditional retailers can win is to really differentiate and resonate with the local audience. To do this well, the 12 Power Stores need to have subtle differences that feel authentic. There is so much talk about personalization in the retail experience. What is more personal than your local neighborhood and culture?

The London store is very smart and a real step above the average Foot Locker concept. Product is merchandised well and the whole space is engaging. There is a range of interesting services, including a pop-up barber’s shop where customers can get a haircut.

As nice as the store is, the key is to integrate wider services and ensure that it remains a destination. Talks, pop-up concepts, product launches, exclusives and other attractions are key. This applies especially to standalone stores in the U.S. which won’t benefit from the high footfall of the U.K. stores, which are both in prime locations.

I have concerns with this model and only time will tell. I am a brick-and-mortar guy, but it’s about giving the customers a reason to shop you. The new Foot Locker standalone store has some of that, but I’m not sure it’s enough. I would have preferred seeing their new standalone store be tied directly into sports opportunities like a few basketball courts, batting cages, etc. allowing customers to come in and play some games, maybe provide competitions and events. It’s hard to get customers today to go to standalone stores unless they absolutely need what you carry and with the amount of competition that Foot Locker currently has, I’m not sure if they will succeed as the must-go-to store without further incentives. The standalone stores are large which means they will be costly to operate, and without the necessary traffic it’s doubtful they will succeed. I hope I’m wrong and only time will tell.

This move takes away much of the foot traffic that Foot Locker enjoys in a mall. It requires that these standalone stores become destination locations, rather than ancillary ones, and this requires a different business model that drives sales from customers specifically looking for a Foot Locker. It is great that they are involved with the local community, but it requires Foot Locker to be in the real estate end of the business, and this will be a drag on future earnings.

Consider this a Foot Locker Event Center! They know how to get the customers there, it will be through our social media influencers. They won’t even need to do the marketing. Foot Locker already said they will have “DJs and rappers.” The sneaker industry is booming and just getting started. “Last year, the U.S. athletic footwear industry generated $17.5 billion.” The sneaker “resale” industry is worth $1 billion. I myself am a Generation Z sneakerhead! I own over 20 pairs of high-end collectible sneakers, yes, collectible. Nike has become the top fashion brand and their collaborations with mega-influencers are being show on the Paris runways. Sneakers aren’t just for running and basketball players anymore. They are one of the most highly collectible items of today and Foot Locker is creating standalone stores so they can accommodate the tons of fans that will be driven their way by the influencers blowing them up!

I view this as analogous to the Starbucks Reserve Roastery concept. It’s a shrine to the brand and the product segment subculture. Coffee on the one hand, sneakers on the other. Foot Locker is in a unique position to bridge the sneaker culture across brands. While Nike, Adidas, Puma, etc. may open their own brand houses, the true sneaker aficionado wants to go somewhere where they can absorb the brand experience of all these brands together. The Foot Locker Power Store is just that, executed with a local flair to draw customers in. I don’t see this as mall vs. non-mall either, but rather more focused on where the right space will be for the locale. That may not be inside a mall. Nor do I see Foot Locker pivoting completely to this concept – the goal is to elevate their brand as Starbucks has done with their most loyal customers and those they want to bring into the fold of extreme loyalty. Key to this will be creating unique brand experiences across all those… Read more »
1
|
0
-   Share

I would like to see this as a winning innovative move for Foot Locker, and hope it will be. They will be giving up huge numbers in foot traffic and impulse shopping. But they are a lot smarter than I am, and know what they are doing.

This has to be a destination conveniently located to survive. Larger metropolitan cities might require two to be successful, and take advantage of the market. Another suggestion I would offer is to select a partner company and make it a joint venture type project where two big names, two big draws act as draws for each of them.

Foot Locker is experimenting with new concepts to make the brand relevant. Selling commodity products (shoes from multiple brands available at many other stores) is a difficult retail segment and differentiating your brand from the sea of competitors is the key to success. Selling in malls makes differentiation even more difficult as you are in a sea of sameness.

The Foot Locker concept store will hopefully resonate with sneakerheads and help elevate the brand image of Foot Locker.

I’m having trouble with the math: close 100 stores, open up … 12? Even given the (presumably) greater productivity of the newbies, either this is a recipe for greatly shrinking the chain, or the standalones will comprise only a small portion of the total … I vote for the latter (heck, let’s just get it over with and call them “flagships”).

I’m not sure they’ll entirely get away from malls, because malls are being re-concepted to achieve exactly what these concept stores are moving towards.

What I think is interesting is that driving a community within the store is exactly what we were doing in the early days of the dotcom. Retailers who understand what worked and what didn’t have ground to gain here.

This concept also highlights that community is ultimately a store-within-a-store concept. It blurs the lines between virtual and bricks and mortar in the most organic way possible. Completely fascinating.

Braintrust
"There is so much talk about personalization in the retail experience. What is more personal than your local neighborhood and culture?"

"Consider this a Foot Locker Event Center! They know how to get the customers there, it will be through our social media influencers."

"The standalone stores are large which means they will be costly to operate, and without the necessary traffic it’s doubtful they will succeed."