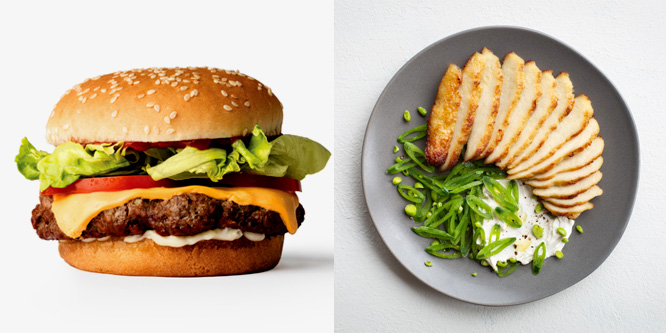 Consumer exuberance — irrational or otherwise — for plant-based meats may be wearing off some. That’s based on the experience of the largest franchisee of Burger King franchises in the U.S., which has dropped the price of the Impossible Whopper in response to a dip in sales.

Carrols Restaurant Group, which operates about 1,000 Burger Kings, has seen average daily sales of Impossible Whoppers fall from 32 to 28 per store, Bloomberg reports. Burger King, which originally sold the sandwich for $5.59, now includes it in a two for $6 menu in an effort to drive higher volume.

While meatless meats continue to carve out space in the diets of American consumers, government forecasts expect per capita meat consumption to rise along with the popularity of keto and other low-carb eating regimens.

Earlier this week, news broke that Memphis Meats, a company that is growing meat from the cells of livestock in its laboratories, raised $161 million in funding. The company, which has raised over $180 million to date, has received investments from the nation’s largest meat producers, including Cargill and Tyson Foods.

The new funding will enable Memphis Meats to build a production facility as it begins to scale production for a technology that promises to help meet global demand for protein while at the same time significantly reducing carbon emissions and protecting animal welfare.

Uma Valeti, co-founder and CEO of Memphis Meats, told NPR that the latest round of funding will enable it to further reduce the high costs associated with growing meat in a lab. Wired reported in 2018 that it cost Memphis Meats $2,400 to produce a pound of meat.

“We have a clear path to bringing a cost-competitive product to market as we scale our production and that’s part of what our latest funding round will help us to unlock,” Mr. Valeti said.

DISCUSSION QUESTIONS: How would you rate the future prospects for plant-based vs. lab-grown meats? Should retailers be investing corporate funds in either food technology?

Please practice The RetailWire Golden Rule when submitting your comments.
Braintrust
"My advice to retailers: tread cautiously and don’t invest any time soon. Remember the hype around 3-D printers and how every home will have one?"

"Lab-grown meats are the big picture solution for addressing nutrition, sustainability and a rapidly growing population. "

25 Comments on "Move over plant-based meat, lab-grown meat is coming"

Food consumption habits are extremely ingrained in people and without self-driven impetus, difficult to change. Plant-based meat substitutes have been somewhat of a novelty and novelties always get attention initially. As time goes on some people will adjust and stick with them, most likely will revert. Synthetic meat has yet to experience that cycle, but when it gets to the stage that it does, I suspect that it will be similar, but because it’s closer to true meat will have more permanent converts.

If plant-based “meats” are going to have long-lasting impact, it’s not going to come by way of fast food. It will be driven by health choices (lots of data in current plant-based media-hyped brands raises health flags) or by necessity in a world facing ever more extreme climate issues.

My advice to retailers: tread cautiously and don’t invest any time soon. Remember the hype around 3-D printers and how every home will have one?

Lab-grown products have been in testing for years and only now are being mentioned in the news on a larger scale. I know future-wise these options are necessary, who knows if cows will be around 50 years from now? But it will take a lot for general public acceptance of food grown from cells in a lab…. Plant-based alternatives are just now being more widely accepted and that has taken decades.

At least plant based “meats” sounds somewhat like real food — I suspect a very different reaction if the products are labeled “lab-grown meats.” The very term conjures up all sorts of conundrums. For example, how am I to apply my favorite standard for beef “If I don’t see it grazing behind the restaurant when I drive up, it’s too well done” to lab-grown “meat”?

Let’s stipulate that “lab-grown” is not the terminology the branding experts would recommend. Would “cultured meat” go over better?

I heartily — no pun intended — agree, James, but I think the big issue is going to be legal challenges from the (actual) meat industry or “industries,” really since beef, pork, chicken, etc. aren’t some monolith, to any use of the term “meat.” We’ve already seen this with the dairy industry and the various plant-based “milks” on the market.

I think that this problem has been overthought by some. Stick to the concept contained in the Greek inscription in the Temple of Apollo at Delphi: “Nothing in Excess” and everyone will be fine!

“Nothing in excess.” Perhaps the wisest comment we will see today. If you want meat, eat meat, just don’t overdo it. In the last 50 years beef consumption has doubled in developed countries. Did we eat enough meat 50 years ago? let’s just eat real food and not try to fake it or overdo it.

Well, I am not totally misunderstood. I feel better now…

There is enough room in the marketplace for many types of meat alternatives. Just look at what has happened in the milk category. The trick is determining the types and brands of meat alternatives that resonate with the consumer, creating long-term CPG success. It is inevitable that as more CPGs come into this space retail prices will drop and pricing parity with meat products may happen. Retailers need to move cautiously into this category and are better off partnering with a supplier to hedge their risk.

Isn’t that the same thing? “Plants” from fast food purveyors are from grow houses, not Jim the Farmer’s place down the road. Either way, if I just MUST have a garden sandwich, i think I’ll take a ride over to Jim’s and buy some of the real deal vs. going to Burger King or McDonald’s. Burger joints and healthy eating just seem antithetical right from the get-go.

Retailers should beware. Plant-based eating is definitely increasing, especially among Millennials, but many are doing it for health reasons and “burgers” from fast food restaurants just don’t fit into that lifestyle.

Veggies are good. Let’s eat vegetables. Why turn them into burgers or anything? (Though I do like a veggie burger once in a while, they have been around for years. Gosh, I hope they aren’t genetically modified.)

Lab-grown? That suggests to me chemicals and additives that I try every day to keep out of my body. If we think factory food is bad for us, what do we think about lab food?

Try the Beyond Burger. Far less processed, no soy and darned tasty.

I love the “gag” bit. Sounds a little too “manufactured.” It’s like eating “American Cheese Product.” There is no cheese in it. Here in our household we call it “polyester cheese.”

Polyester cheese. Good one! And true.

I’m not so surprised that sales are falling off at Burger King. I mean, I never eat fast food, but I am a (mostly) vegetarian and so I decided to try one. It tasted like a fast food burger. There are places that do it better.

But the notion of lab grown meat still troubles me. Again, it could be because I haven’t eaten any of it for more than 40 years but it creeps me out.

For me it is a fad, but some folks who are vegetarians like the convenience of getting their plant burgers. Now we have lab-grown meats, which again some folks will be thrilled about since there will be fewer cows expelling gas, ruining our climate. A great Beef burger is what most of us still want when we are hungry, and if this lab-made beef tastes the same, then it might be a viable product. Real cattle is not going away, in spite of what extreme climate change activists want, and we will be just fine. The ranchers will continue to raise their cows, and there is room for plant-based foods as well. Let the consumers choose and I’m betting the results will favor the old-fashioned way, with farmers doing what they always have, which I’m grateful for. Have a great weekend everyone.

Lab-grown meat was tested in Europe with little success. As for prospects in the U.S., lab-grown meat sounds like Frankenfood. ‘Nuff said.

Lab-grown meats are the big picture solution for addressing nutrition, sustainability and a rapidly growing population. Notable too are the adjacent innovations in lab-grown leather; a topic our company has been engaged in. Not only are lab-grown leathers humane, sustainable and eco-friendly – they also provide for materials innovation that would be impossible for genuine animal hides (such as leather with reflective properties, or electrical conductive fibers).

There are two giant hurdles:

I for one, would not be willing to try it.

So, far the meatless meats are really targeted to those whom cannot, should not or do not want to eat meat. Those suffering from digestive afflictions sometime cannot or should not eat red meat. However, the vast majority of products currently available are no healthier than meat-based products. The amount of salt and carbs is typically huge. These are definitely not dietetic foods.

Jake holds his “enthusiasm” well … seriously, though, I don’t think any of us can really know the answer to this. I CAN say, though, that it’s not going to be a contest unless we come up with a better term than “lab grown” meats. Perception is all important here, and in the battle between Ma Nature and the mad scientist, the former is going to win … every time.

I think the important thing to keep in mind is that lab-grown meat is being experimented with because there is a tangible (and growing) human need to address — food you can feel good about eating (healthier, sustainable, ethical). While the current iterations of plant-based proteins and lab-grown meats don’t get very far in meeting these needs in a way that doesn’t offend the palate or the wallet, there is still something here to solve. I wouldn’t invest in these iterations, but the effort and direction is right.

This is the classic example of a solution looking for a problem. Plant based meats are not necessary (or desired by the marketplace), nor are lab-grown meats, which offer no advantages over traditional meat. The consumer will not pay more for a substitute that offers no advantages over meat, no matter where it comes from or what it is made from. Instead, the market will eliminate these choices from the category and stick to its preferred meat.

Braintrust
"My advice to retailers: tread cautiously and don’t invest any time soon. Remember the hype around 3-D printers and how every home will have one?"

"Lab-grown meats are the big picture solution for addressing nutrition, sustainability and a rapidly growing population. "