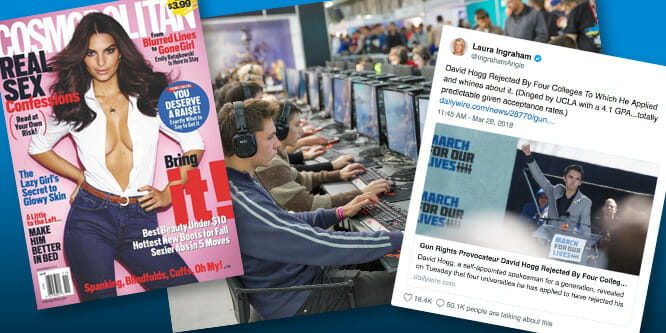 Brands today are increasingly judged by the company that they keep and some, maybe even most, are becoming more particular in the selection process.

The most recent high-profile example is the retreat of advertisers from Laura Ingraham’s show on Fox News after the conservative pundit took to Twitter to mock David Hogg, one of the students who survived the Parkland High School massacre, for being rejected by the admission departments at four colleges. While some pointed out to Ms. Ingraham the inappropriateness of an adult publicly mocking a teenager (a student with a 4.1 GPA), Mr. Hogg took action on Twitter by calling on his followers to contact the program’s advertisers. The result has been an exodus of advertisers, including Johnson & Johnson, Nestle, Stitch Fix and Wayfair, from Ms. Ingraham’s program, prompting an apology from her roughly 25 hours after she first insulted the teen.

While the dispute with Mr. Hogg created by Ms. Ingraham has gotten the most attention, other cases involving Microsoft and Walmart provide recent examples of brands looking to control their narratives.

Earlier this week, Gizmodo reported that Microsoft has informed users that it will begin enforcing new rules of behavior on its XBox platform beginning on May 1. The tech giant’s user agreement states that accounts may be suspended or closed for violations, including the use of “offensive language” or other “inappropriate content or material.”

According to Gizmodo, profanity and other forms of “offensive language” are commonplace in online shooter games that include chat. How Microsoft will gauge when these communications have gone too far remains to be seen.

Separately, Walmart recently announced a decision to remove Cosmopolitan from its checkout racks after a campaign by the National Center on Sexual Exploitation (NCOSE) criticized the magazine for its “hyper-sexualized” photography and content. The retailer said it would continue to sell the magazine in-line and that the decision was made primarily based on business grounds, although it did acknowledge the concerns raised by NCOSE.

DISCUSSION QUESTIONS: Has the definition of brand changed in modern America? Do you agree that retailers and brands are increasingly being judged by the company they keep?

Please practice The RetailWire Golden Rule when submitting your comments.
Braintrust
"Brands need to get human, do good and find a real reason to be worthy."

"I don’t think the definition of brand has changed — but it is much easier to express our feelings about a brand and the company kept."

"In the current world of hyper-awareness, consumers expect brands to take sides."

9 Comments on "Microsoft, Walmart and other brands play content police"

Consumers are now calling out brands that exhibit bad company or bad behavior because they believe every individual has a voice that can be heard and counted. The brand “megaphone” is over. Brands need to get human, do good and find a real reason to be worthy.

Absolutely. This has been increasingly true since the 2016 election and the #GrabYourWallet movement.

Corporations are technically viewed as people under the law, so it’s not a far stretch for society to hold them true to the same standards as they would a friend or colleague. It makes sense that rules of “you are what you eat” and “you are the average of the five people you spend the most time with” apply.

Just like a friend would call out someone for bad behavior, consumers are now calling out companies. Which is why it’s so important for brands to have strong values and mission statements that permeate everything that they do. An example that comes to mind is Patagonia for suing the Trump administration for reducing the size of Utah’s national monuments. Was that a safe or easy thing to do? No. But it coincides with their brand values and their consumers respect them for it.

In the current world of hyper-awareness, consumers expect brands to take sides. Brands do this at their own peril, because every move to placate one side of a political discussion may anger the other side. So, brand management must be careful about their choices.

I don’t think the definition of brand has changed — but it is much easier to express our feelings about a brand and the company kept. The idea of boycott is not new — people have been telling advertisers how they feel since TV was created and, I’m guessing, earlier than that for radio.

Today’s consumers want brands to stand for something. They look for those extra reasons to spend their money with one versus the other. Although this can be risky for retailers, fence sitting may not always be in their best interest. For my 2 cents.

George’s claim may be true, but where is the evidence? (A handful of anecdotes does not a compelling argument make.)

The reality is society has progressed (if that’s the right word) from a world where stores kept their windows covered on Sundays to one where even mainstream content approaches obscenity … companies/brands have more options in how they market, and they have to make choices.

Yes, absolutely. Consumers have significantly higher expectations for brands today — more than ever. Brands have spent many years trying to personify themselves in front of their target customers in an attempt to be more relatable and generate an emotional attachment. The natural evolution of this is that customers now expect these personified brands to act and respond in human ways to questionable content and events. Consumers react to such actions automatically and they want their preferred brands to share their emotions and beliefs.

In our hyper-fractured political climate, brands and retailers who want to appeal to the general population should try to avoid alignment with extremist views — either on the right or the left. Large numbers of activists are searching for examples of companies who are taking advertising dollars from the fringes of political beliefs. And when they find these examples they now have a platform to call attention to it in a very strong and damaging way. It is in the retailer’s and brand’s best interest to shun such revenues unless being aligned with the far right or left is part of their intended brand image.

Brands are definitely being judged by the company they keep. It’s so easy to bring awareness to consumers through social media, so you have to operate your company with integrity. People now align with brands that represent their beliefs and values. This is a major change from decades prior and I think it’s a change for the better.

Braintrust
"Brands need to get human, do good and find a real reason to be worthy."

"I don’t think the definition of brand has changed — but it is much easier to express our feelings about a brand and the company kept."

"In the current world of hyper-awareness, consumers expect brands to take sides."