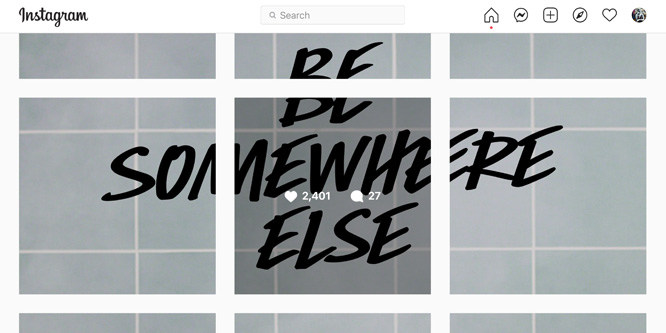 Lush Cosmetics deactivated its Instagram, Facebook, Snapchat and TikTok accounts on Black Friday with a promise to stay away until the social media platforms can provide safer environments for their users.

The policy will roll out across all 48 countries where Lush operates.

In its statement, Lush said it was motivated to quit social media by the news of leaked documents from a former Facebook employee that showed the company knew Instagram negatively affects teens’ mental health and how the Facebook platform amplifies hate, misinformation and political unrest.

“Lush wouldn’t ask its customers to meet them down a dark and dangerous alleyway — but some social media platforms are beginning to feel like places no one should be encouraged to go,” the U.K.-based retailer said in a statement. “Something has to change. The brand hopes that platforms will introduce strong best practice guidelines, and hopes that international regulation will be passed into law. But Lush can’t wait.”

Lush’s CEO, Mark Constantine, told The Guardian the move was particularly driven by revelations that Instagram made body image issues worse for teenage girls. He said, “I just thought ‘That’s their own research and they’re ignoring it and we are attracting people to their platform.’ We had no choice whatsoever. Lush attracts an awful lot of girls of that age.”

Lush, known for its cruelty-free and organic bath bombs, shampoos and soaps, actively champions social and environmental causes such as Black Lives Matter, deforestation and sustainability.

Lush’s UK operations quit Instagram and Facebook in 2019 after growing “tired of fighting with algorithms” and direct communications with customers, but rejoined last year as the pandemic drove customers online.

In addition to Lush, Patagonia announced last month that it would boycott Facebook’s platforms over the allegations that it prioritizes profits over user safety.

DISCUSSION QUESTIONS: Did Lush make the right call in exiting social media from both a marketing and commerce standpoint? Should other retailers or brands targeting teens follow?

Please practice The RetailWire Golden Rule when submitting your comments.
Braintrust
"Bravo to Lush and Patagonia. All the laws in the world won’t change the social media companies’ values. "

"Noble or opportunistic? That’s the question. Isn’t the whole idea of cosmetics to look different than you naturally do? Isn’t that what social media provides?"

"The sentiment is nice, but the drastic action feels more like a publicity stunt than it does a motion for change."

15 Comments on "Lush exits social media over risks to teens"

Back in 2019, Lush exited social media. It came back nine months later. Whether this latest move is a temporary stance designed to call attention to issues, or a permanent move remains to be seen. As much as Lush has a point, in my view it would be better to remain and use its accounts as a force for good by using authentic, untouched images – much in the way that Aerie and several other retailers do.

This is an interesting conundrum. From a capitalist perspective, one would would say this is not such a great idea. Social media bring in business. Some of us have never liked social media for more than one reason and the one that Lush has singled out as their reason for exiting the social media platforms is the most compelling. My grandparents would have asked: what is the ethical, right thing to do? Answer: Exit.

Exiting social media doesn’t help fix the problem. Creating content that is safe to consume and sending messaging that is uplifting and counter to the typical beauty messaging would be a more productive move. The sentiment is nice, but the drastic action feels more like a publicity stunt than it does a motion for change.

Wow – can you imagine if the big retailers all exited social media? Think about what kind of statement that would make and how retailers would have to pivot to another communication vehicle. Does anyone remember what it was like (for retailers) before we had social media?

I can imagine that world and hope for it. As television was once referred to as “a vast wasteland,” so are most social media sites, but more dangerous.

Lush’s bold, counterintuitive move differentiates and endears the brand to consumers who shop with their values. Exiting platforms that harm users’ well-being is a powerful act of leadership and corporate social responsibility. Companies that follow Lush’s move could be seen as both noble and imitators.

I don’t think it is counterintuitive at all. It is the only way to force change. Hopefully, but doubtfully, others will follow.

Noble or opportunistic? That’s the question. Isn’t the whole idea of cosmetics to look different than you naturally do? Isn’t that what social media provides? Without social media you may get loyal customers but how does your word-of-mouth grow without pictures on social media?

Bravo to Lush and Patagonia. All the laws in the world won’t change the social media companies’ values. They have only one, as the Facebook documents indicated.

The only thing that will change their behavior is to challenge their bottom line. Certainly, Lush alone won’t change anyone’s bottom line, but one must start somewhere. The social media companies really don’t care what their effects are if they are making a buck. I won’t say they have bad values, I would say they have no values. They do not feel responsible for any of the results caused by posts.

Recently, my 16-year-old granddaughter and a few of her friends were talking about all the terrible things on Instagram, driving many girls to anorexia. Particularly in the teen demographic, their opinions are fragile and if they feel like “everyone” is what they see on social media, then they want to be like “everyone.”

This isn’t the first time Lush has made a stand for what they feel is an important cause. They are known for their stance on not using animals to test their products. That attracted attention and created some loyal fans. Now they are concerned for the impact social media has on their teen customers. I’m not sure how it will play out, but I do appreciate the acknowledgement of the problem.

It’s about time a retailer took a stand vs. Big Tech. Perhaps this move will have the same effect that REI’s “Get Outside” campaign (closing on Black Friday) had, and several others will join in for change. As Big Tech is certainly aware, if the customer talks, the BS will walk.

First of all, this isn’t Lush’s first exit from social media. Second, the withdrawal — temporary or permanent — is dead on brand. It will be interesting to see how long they stay off this time and how, if they return, they’ll justify that move. As an aside, this may be a true litmus test of online influencers.

This is also a great argument for the test and learn approach that we preach and then criticize (they left before and then came back!). Not only is it on brand for LUSH specifically, but it could force them to think creatively and be scrappy about digital spend. While online/social spend is deemed “necessary” these days, it’s also incredibly hard to break through the noise (thus the entry of digital natives into brick & mortar). Perhaps there are other ways to spend those dollars….

Lush’s decision to deactivate social media is sensible not only from a marketing standpoint, but also from a business standpoint. Even if Lush has gone down this road before, repeating these steps could indicate that they:

Lush is committed to taking effective actions that make a significant difference. Customers are becoming more socially responsible, and will connect with this initiative. They’ll remain loyal to the brand regardless of their social media presence.

Braintrust
"Bravo to Lush and Patagonia. All the laws in the world won’t change the social media companies’ values. "

"Noble or opportunistic? That’s the question. Isn’t the whole idea of cosmetics to look different than you naturally do? Isn’t that what social media provides?"

"The sentiment is nice, but the drastic action feels more like a publicity stunt than it does a motion for change."