Lowe’s takes AR immersion to the next level 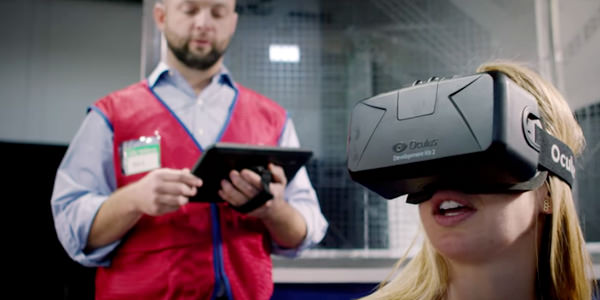 Lowe’s has put a lot of resources into adding high-tech flare to the home improvement shopping experience in recent years. Now the retailer’s Innovation Lab is partnering with one of the biggest names in computing to pilot its latest in-store gadget, the HoloLens.

The HoloLens is Microsoft’s augmented reality (AR) headset (“mixed reality” in Microsoft vernacular) and is being implemented in a few Lowe’s stores in the Seattle area, according to TechCrunch. The HoloLens will allow Lowe’s customers to walk around an environment and see potential design elements and hardware superimposed in the room as holograms.

The technology in some ways resembles the Lowe’s Holoroom, which debuted in 2014. The Holoroom presents a view of a room through a hand-held tablet that superimposes different potential furnishings. But the HoloLens promises a more immersive and detailed experience, with the hologram-filled room occupying customers’ entire field of vision.

A blog entry by Lowe’s boasts of HoloLens’s level of detail that allows users to see the distinction between different textures on the holographic appliances it displays. Lowe’s speculated that the technology could someday be available for home use.

HoloLens could also affect the setup of the stores themselves were it to catch on. The Next Web reported that Microsoft is billing HoloLens as enabling the retailer to “bring customers a new way to experience full-scale design and appliance options while maximizing precious floor space in the store.”

With pop-up stores and smaller outlets that act as auxiliaries to online shops catching on as alternatives to traditional brick-and-mortar stores, HoloLens could shape the future of the small format showroom.

Lowe’s has already shown an interest in going smaller in an area of retail known for its large stores. Last year Lowe’s launched two small format stores in Manhattan geared towards urban living. In addition to being one-third the size of an average suburban Lowe’s outlet, the stores utilize a range of interactive touchscreens and interactive tables to help tech-savvy urban shoppers with their choices.

How likely are large numbers of shoppers to use AR devices like the HoloLens as part of their in-store experience? Could AR have a meaningful impact on store layouts in the near future?

Please practice The RetailWire Golden Rule when submitting your comments.
Braintrust
"For people that buy things like kitchen cabinets, bathroom fixtures and maybe even patio furniture, they might be willing to don the equipment and spend the extra time to envision part of their home with the merchandise."

"If the devices, or the access to the AR technology, are made readily available to the consumer, it is very likely that it will take off because it is dramatic, it is realistic and it does give the customer a good rendition of what could be."

"I do think AR will outperform VR for in-store usage because it dodges one of the key issues with VR: VR makes you blind, and in a public space that tends to make people feel very vulnerable."

AR/VR are perfectly suited for interior design, landscape and architectural experiences. Most people can’t visualize a particular design or color in their particular space. This technology will allow shoppers to see what a particular remodel will actually look like, helping the shopper make that purchase decision. This technology is far more interesting and valuable to the Lowe’s shopper than the greeting robot is!

HoloLens is definitely a great tool to create new experiences and increase sales in niche areas of Lowe’s business model. For people that buy things like kitchen cabinets, bathroom fixtures and maybe even patio furniture, they might be willing to don the equipment and spend the extra time to envision part of their home with the merchandise. But so many shoppers go to Lowe’s for an item or two or for non-glamorous building materials like 2x4s, where there is no benefit to an item-level AR experience. So unless it’s used as a locating tool to find that 2″ wye buried somewhere in the plumbing aisle, Lowe’s will need to change its merchandising to more lifestyle-type products than construction sundries for the experiential benefits to be of value.

If the devices, or the access to the AR technology, are made readily available to the consumer, it is very likely that it will take off because it is dramatic, it is realistic and it does give the customer a good rendition of what could be. If people have to wait in line to avail themselves of a headset, it will be another frustrating experience. The questions are really: will it tip the sales needle? Will it provide the entertainment kitsch factor that we have all agreed is a necessary ingredient of all future brick-and-mortar retailing?

AR will certainly play stronger in certain product categories (furniture, cabinetry, home decor) and may well be maximized if the floor space is played out accordingly.

I’m torn on this subject. On one hand, VR is not far enough along to truly impact shopping. That said, it is defining its own future and could become a major player in years to come. Installing VR in stores will require tech-savvy employees to explain the process to consumers and keep the devices working — a costly undertaking.

Consumers will need to be trained to be satisfied with a VR experience rather than being able to physically touch a wide arrangement of appliances in smaller format stores. But through VR they will be able to see exactly what their new kitchen or laundry room will look like.

VR is in its infancy. As it grows more sophisticated, and as consumers come to understand and accept it, it will become a force in retail. Just what force it will become is still a work in progress.

High-tech and small formats are perfectly matched for Lowe’s, especially as it begins to roll out more urban locations designed to help younger shoppers navigate the “I now care about how my home/living space functions and looks” phase of life.

Younger shoppers are not daunted by the concept of “eyesets” and Lowe’s realizes the power of desire that on-the-spot visualization can create. If testing produces conversion in high-margin categories, they will make room in the stores.

Now if they could only add scents of yummy food to use when folks use HoloLens for potential kitchen remodels!

Lowe’s is not the “go-to” place for the latest and greatest of anything to do with modern home improvement they are a discount retailer caught in a quagmire of illusion fed by management’s detachment from the market’s consumer base. Microsoft is not the “go-to” operating system for several decades for the same reasons and terminating the CEO that got them there will not by itself solve the problems. Their space-age technology has thus far found a home on the weather show and some techie movies. This will not move them back into the winner’s circle.

To make matters even worse Lowe’s and Microsoft’s workforce floor-level brain drain only made the path to success more daunting. Slowing sales and an evil economy will not be solved with IT magic and talking end caps. The companies need lightning-speed reliable customer service that has product knowledge that is superior to the user and/or customer base. What’s left of the customer base, that is.

I don’t think large numbers of shoppers will use Lowe’s AR device, but it puts them far ahead of competitors in building a reputation of being leading edge in the home improvement game.

It may take just a little time for these kinds of ideas to catch on, but very likely to succeed. At least it represents a combination of virtual and reality (i.e. taking place in the physical store), so that at least bodes well for physical stores.

There is definitely potential for this type of technology in DIY environments. And the environment may be a challenge. As someone who frequents hardware/DIY stores far too often, the biggest challenge in using this type of technology will be staffing, scheduling, and onsite execution as the design portions of the large DIYers is almost always at max capacity. Much thought should be given about creating the layouts and spaces where these can be used effectively. The next step after showing a cool design is mixing and matching the materials so they can be seen, touched, and coordinated by the shopper. And it takes some room and thought to make this a pleasant and convenient process.

It’s very unlikely that store owned AR or VR devices will appeal to many customers, and I say that as an investor in VR and an enthusiast. It’s uncomfortable to press something you find in a store to your face, even (and perhaps especially) if the store staff let you know they just disinfected it!

I do think AR will outperform VR for in-store usage because it dodges one of the key issues with VR: VR makes you blind, and in a public space that tends to make people feel very vulnerable. (“Do I look like an idiot? Is someone walking off with my handbag?”). AR is much easier to enjoy in public.

However, despite expecting only a small number of shoppers to engage with these platforms, I think they’re critical brand investments for stores that want to show that they are fresh, exciting and still truly relevant. It only takes one or two shoppers wearing goggles near the entrance for every shopper who walks in to get the message — and the tech is cheap too.

It’s not necessary for “Large numbers of shoppers” to use the devices. It is possible that they will appeal to a niche that is large enough and active enough to be profitable. The Apple story is about a company that appeals to a relatively small slice of the market, but earns outsized profits by serving them exceedingly well. This has that potential, as well.

Braintrust
"For people that buy things like kitchen cabinets, bathroom fixtures and maybe even patio furniture, they might be willing to don the equipment and spend the extra time to envision part of their home with the merchandise."

"If the devices, or the access to the AR technology, are made readily available to the consumer, it is very likely that it will take off because it is dramatic, it is realistic and it does give the customer a good rendition of what could be."

"I do think AR will outperform VR for in-store usage because it dodges one of the key issues with VR: VR makes you blind, and in a public space that tends to make people feel very vulnerable."