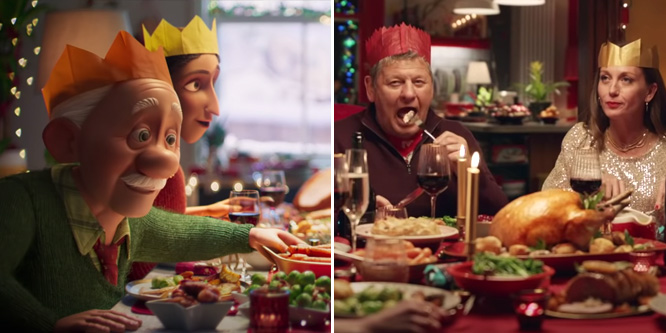 No tearjerkers here. That’s the top line introduction to two newest spots, presented for your consideration in our competition to see which retailer will win this year’s RetailWire Christmas Commercial Challenge.

Last week’s commercials pitted Haford Hardware, a single store shop in Wales, against John Lewis and Waitrose. The indy retailer created a homespun spot that was our runaway winner (72 percent to 28 percent) to move on to the finals.

This week, we go back to the UK for the two more spots from Lidl GB and Tesco for your consideration. While both commercials allude to the difficulties of the past year, they aren’t letting that get them down.

Lidl, which turned to animation for its creative presentation, speaks to the lockdown — “Lonely hearts meet through the window. Could a friendship be ahead?” The spot, which has received more than 287,000 views on YouTube, make a quick turn from there in a new upbeat direction. Lidl, while it was at it, also took a good humored poke at “Kevin the Carrot,” the main character in rival Aldi’s Christmas campaign.

Tesco declares in its commercial: “After a year like this, we believe there is no naughty list.” You’ll see where it goes. For those wondering about the reference, the young man who didn’t give to Captain Tom was speaking about the former British army veteran’s endeavors post-military (you can check out the link below). Tesco’s spot has been viewed 225,000 times.

DISCUSSION QUESTIONS: Which of the messages presented by Lidl GB and Tesco do you think will resonate more with consumers? Which do you think strikes the best chord during this unusual holiday season?

Please practice The RetailWire Golden Rule when submitting your comments.
Braintrust
"Lidl is good, but Tesco captures the desperation of the times perfectly and tells you it’s okay – and isn’t that one of the big messages we need to hear this holiday season?"

"Tesco is the clear winner for me. A naughty list is at the heart of Christmas so just about every consumer relates."

"I really like how both spots keep the focus on their products."

Both of these commercials infuse a lot of product placements from their respective retailers, but Tesco’s ad is much more entertaining and upbeat. I think the Tesco ad does a great job of integrating humor into our depressing pandemic situation and will resonate more with consumers.

Lidl is good, but Tesco captures the desperation of the times perfectly and tells you it’s okay – and isn’t that one of the big messages we need to hear this holiday season?

The Lidl ad is cute and jolly, but it isn’t really very imaginative. It does showcase the products well, but after one watch I am done with it!

I love Tesco’s irreverence and the fact it has woven in themes that are very relevant to 2020. Having a Britney Spears song as the soundtrack is unexpected and makes a change from the usual Christmas music.

For me, Tesco wins this one.

Although I did enjoy the line “Proper Christmas magic is in cake and sprouts and gin” the Lidl commercial left me cold. Cute but meh.

On the other hand, the Tesco spot made me laugh out loud. Britney Spears singing, combined with the looks on the actors’ faces, was perfect. And even though the only Captain – sorry Major, that’s where my American head went – Tom I know is in a David Bowie song I thoroughly enjoyed this commercial. Tesco wins!

Captain Tom is Captain Thomas Moore, a retired army veteran, who did a one-hundred-lap walk of his 27-yard garden for his 100th birthday. He wanted to raise £1,000 for charity. In the end, after the United Kingdom took him to heart, he raised over £32 million for good causes! He also got knighted by The Queen for his efforts so his proper title is now Captain Sir Thomas Moore!

I googled Captain Thomas Moore after posting, I am very impressed! You know me, Major Tom just came to mind. 🙂

A couple of good ads. The British know how to do it right. The Tesco ad really resonated with me, in that it addressed the trials of 2020, but is giving customers permission to treat themselves this holiday season.

Everyone needs a break after nearly a year of bad news, lockdowns and not being able to meet friends and party, so it is not surprising that both these retailers are giving a happy upbeat message. However what is interesting is that they are far less price-focused than in previous years. Both of these retailers are price-conscious and normally price plays a very major part in their ads. This year the ads are more creative with a message. The reference to Captain Tom in the Tesco ad is very clever as Captain Tom became such a huge story this year and for that to be possibly the one thing that is unforgivable works well. The message is also very good – everyone deserves a break this year so no “Naughty List.” Tesco would get my vote between these two for its creativity and very human positioning, but congratulations Lidl on recognizing that there is more to this year than price.

I like the use of product placement in each, but I like the message from Tesco more than the Lidl advertisement – more humor but it resonates that everything will be OK.

I really like how both spots keep the focus on their products. But Tesco takes the win. It has more energy, upbeat humor, and is just a little more relatable.

The Lidl ad hit the value message hard, but the spot feels like it could have run in any year. 2020 demands something different, and Tesco delivered. Using cheeky British humor to acknowledge what a lousy year this has been — while also focusing on product — made this the week’s winner. Very well done!

Tesco is the clear winner for me. A naughty list is at the heart of Christmas so just about every consumer relates. After a very tough year, to say there is no naughty list jumps out all the while showcasing products they sell.

Both spots do a great job of addressing the reality of 2020 by reminding us that we don’t have to accept it over the holidays. Both also do a good job with product placement and giving us reasons to shop with them, but I’ll give a slight edge to Tesco for being more humorous and irreverent enough to forego the Christmas music and use Britney Spears instead!

I really liked the Tesco spot. The Lidl ad was just a well produced commercial to me, nothing special. And in terms of message, I felt Tesco was a little more on point.

This one is a bit tricky. Personally, the Tesco ad is incredible in that it’s the message for 2020 which resonates exceptionally for me. The Lidl ad is incredibly mediocre and artificially self-aware.

On the other hand, there are many who will dislike Tesco for its honest cynicism — Christmas is a time for a type of denial as we create an artificial world around us.

Still, I give it clearly to Tesco. Giving customers “freedom from worry” is the most precious gift we can give this year — even if that freedom means we’re all on the naughty list.

My vote goes for the Tesco ad. It incorporated many things its customers and many of us may need forgiveness for and loved the upbeat tempo of the ad.

Tesco did well in capturing the absurdity/unreality of our current situation, but — as was the case with a similarly toned example from Down Under — I think many may find the irreverence off-putting. So Lidl by default — and to be fair: excellent animation and bountiful examples of displaying the product … we so often DON’T see this done that it’s almost nostalgic when it is.

Tesco is my winner. It strikes the right tone and message for this Christmas season. Lidl is okay for fanciful adults, but much better for children. Who is Lidl trying to reach? Kids?

Both great ads, but loved the humor and reality in the Tesco ad!

These ads prove that even in wonky 2020, Christmas is all about food, family and generosity. Lidl’s spot is quirky and endearing yet Tesco’s timely theme of breaking all the rules resonates more. (Virtual school homework? Pffft!) Using Britney Spears’ song suggests Tesco’s targeting Millennials’ young and growing families.

Two really catchy spots! But I have to give it to Lidl for a consistent narrative. Their story hangs a bit more tightly from end to end vs Tesco where it was just a little tough to keep track. Honestly, and oddly, I think the music was more of a distraction for Tesco even though the song was spot on. Perhaps, this spot could have done without the vocal track to the music.

Lidl does better with integrating the brand more consistently into the story but these are both memorable spots.

Braintrust
"Lidl is good, but Tesco captures the desperation of the times perfectly and tells you it’s okay – and isn’t that one of the big messages we need to hear this holiday season?"

"Tesco is the clear winner for me. A naughty list is at the heart of Christmas so just about every consumer relates."

"I really like how both spots keep the focus on their products."